Sitting on Mission street, John Halminski’s barbershop, the Square Deal, is being carefully built with a similar old school atmosphere.

In Halminski’s mind, the Square Deal will resemble an exquisitely traditional barber shop, where individuals come not only for a great cut, but to enjoy the community and camaraderie of the shop. He plans on developing a space where guys can get a hot towel treatment and straight shave, while chatting with his barbers.

Halminski represents the third generation of his family to own the Square Deal. Founded originally by his grandfather William Halminski in 1925, the barbershop was named after the labor protection legislation created by Theodore Roosevelt. After William worked as a barber for nearly 30 years, John Halminski’s father, Edward “Hal” Halminski, was introduced to the family business in 1953. In the shop, “Hal”, who had recently returned from World War II, was given a place to work alongside his father and eventually spend time with his son.

For the Halminski’s, who initially immigrated from Poland before coming to California from the east coast, South Pasadena acted as a community for the family to develop American roots. Now, nearly a century since his grandfather broke ground on the Square Deal, John Halminski is garnering the location with the grit and character that it has had for generations.

“As a kid I would come listen to stories in the barbershop. When someone was in the chair, it didn’t really matter what their background was.” notes Halminski,”The barbershop was a place where people can truly be themselves, a place that feels like home.”

In creating the ambiance of a classic barbershop, Halminski has decided to curate an environment without the bells and whistles – an intimate setting where customers feel free to talk about anything from city politics to sports. He will, however, include many details which reflect the deep roots his family has in South Pasadena, like his grandfather’s original Barber’s pole.

“I want to carry on the legacy and tradition, something that I can hand down to my kids – a place that will give back to the community.” said Halminski.

After obtaining all of his licensing, Halminski is now working on the set up of his shop. With construction underway, he hopes to open his six-chair shop in mid to late July. 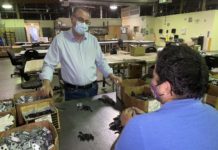