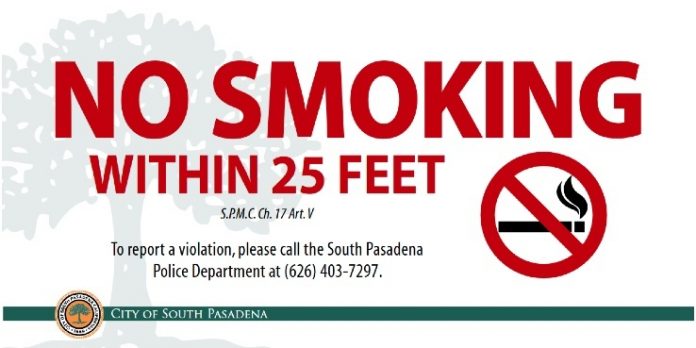 The updated ordinance adds city sidewalks and other public spaces to the existing prohibited smoking areas.

Why did the City Council adopt new smoking regulations?
To further protect public health and reduce environmental impacts from smoking, the City of South Pasadena recently updated its smoking ordinance. The City’s action was in response to residents who voiced concerns about the adverse effects of secondhand smoke on vulnerable populations, particularly children and seniors.

How does the City ordinance align with State of California smoking regulations?
The State of California prohibits indoor smoking in restaurants, bars and nightclubs. The state also prohibits outdoor smoking within 25 feet of a playground and within 20 feet of a government building. The City’s ordinance builds on the state regulations with further measures to protect public health.
Where is smoking prohibited under the new City ordinance?
Smoking is banned in and on the following public areas and facilities in South Pasadena:
• City property and facilities, including parks
• City vehicles and public transportation vehicles
• City public transit stops and stations
• Places of employment, including offices and businesses
•Health care facilities
•Enclosed areas open to the public (whether privately or publicly owned).
•Non-enclosed areas open to the public (whether privately or publicly owned).
•Multi-unit rental housing, both indoors and in outdoor common areas
•All public sidewalks or walkways, parkways, curbs and gutters

Additionally, smoking is prohibited within 25 feet from any of the areas and facilities listed above except sidewalks, walkways, parkways, curbs and gutters

Where is smoking permitted in the City of South Pasadena?
Smoking is allowed at private residences, with the exception of multi-unit apartment buildings. In multi-family apartments, smoking is allowed in open, designated smoking areas located at least 25 feet in any direction of any doorway, window, opening or vent into an enclosed non- smoking area. Smoking in private vehicles is permitted.

The ordinance seems very restrictive. Is this legal?
Yes, the City Council has the authority by the California Constitution and the California Health and Safety Code to protect public health and safety of the citizens it represents. The updated ordinance falls under that authority. The City of South Pasadena is among over 40 other California cities such as Burbank, Agoura Hills, Manhattan Beach, Laguna Beach, Calabasas, Oceanside, Del Mar, Santa Monica, San Rafael, that have banned smoking in public places and on sidewalks.

How will these new outdoor smoking regulations be enforced?
The ordinance directs those responsible for outdoor public areas where smoking is prohibited to maintain a smoke-free environment. Those responsible for public places and places of employment, such as business owners and owners of multi-family apartment buildings, are to post visible “No Smoking” signs at the primary entrance.
The City will post signage in the business district, parks, parking lots and walkways with the South Pasadena Municipal Code information. The ordinance is intended to be self-enforcing. However, City Code Enforcement staff and the Police Department will respond to smoking violations as necessary. The City has the ability to issue a citation of up to $100 for a first offense.