It’s always heart wrenching when a season with so much hope comes to an end, but South Pasadena High water polo coach Michael Gonzales knows he’s building something special and credits his current crop of players for building a solid foundation for what appears to be a strong future.

“These guys have created a culture we haven’t had before,” said the Gonzalez, who guided the Tigers to an 18-10 overall record, and a Rio Hondo League championship with a perfect 8-0 mark before his team fell to Schurr High 7-6 Thursday night in the second round of the CIF-Southern Section Division 3 playoffs at Temple City High. The loss comes on the heels of a 11-6 victory over Newbury Park in a first round match last Tuesday.

Despite the setback to Schurr, South Pasadena’s water polo program is headed in a positive direction after the Tigers won their second straight league crown. “Prior to 2017 the drive for consistency and a deep postseason drive just wasn’t there,” explained Gonzalez. “I’m just so proud of these kids, not so much for what they’ve done in this immediate season, but they are putting something together that is going to be so appreciated for teams that follow.”

He called the feat of repeating as league champions as “monumental,” noting that hasn’t occurred since the late 1990s.

The blossoming of the program started in 2017 when the Tigers finished 6-2 in league, losing to Temple City twice but managed to go to the CIF semifinals of Division 4.

“We feel like we’re really going got something going here,” noted Gonzales, disappointed his team did not advance further in the postseason, but recognized he was facing one of the best teams in the well-coached Spartans.

Both Schurr and South Pasadena know each other well, the teams playing each other only two weeks ago when the Spartans came out on top in that one, 13-9.

In Thursday’s close battle, it was tied 2-2 after the first quarter before Schurr took a slight 4-2 lead at the half. The Spartans increased their advantage to 6-3 after three periods, but the Tigers made it interesting in the fourth, mounting a comeback by scoring three out of the last four goals. It wasn’t enough, however, as Schurr worked the clock, tossing the ball around in the closing seconds and secured the victory to improve to 24-4 on the season and go onto the CIF quarterfinals.

“We looked a little tentative to attack,” Gonzales said about his squad after it was over. “Offensively, sometimes we looked like we were a little too far away from the cage. We had trouble attacking zones. It was clearly a lot different game than it was the last time we met. We walked into it feeling very prepared. We studied the film thoroughly. We went deeply into our scouting report. They obviously knew us very well too.”

The Tigers trailed by three, 7-4, with just under three minutes left in the game after Schurr’s Axel Jimenez scored, but the Tigers roared back with goals by Owen Imasaki and Eddie Lane-Flannigan, the final one skidding past the Spartan goalie, finding the left side of the net with less than a minute to go in the game.

“There was never any give up by the kids,” said Gonzales, proud of the way they pushed to the end.

He also took notice of the vocal support from South Pasadena fans who made the trip to Temple City to take it all in. “It has been fun to see the community enthused about this postseason run,” said the coach.

The Tigers lose captain Evan Kowal and Brett Sonner to graduation in June, but return everyone else, Gonzales suggesting the future looks bright for South Pasadena’s boys’ water polo program.

“Almost the entire core of the team comes back next year, so I’m excited,” he said. “We’ll have some rising junior and seniors.”

Imasaki and Lane Flannigan both finished the night against Schurr with two goals apiece for the Tigers while Maven Palacious scored the team’s first goal in the first quarter and Michael Felix sent one across in the third period.

“We’re anxious to get back to work,” said Gonzales, already looking ahead to making it a three-peat in league play next year. “We definitely have some things to be proud of.”

The Tigers’ coach knew going in it wasn’t going to be easy knocking off Schurr, a tough second round opponent, saying Spartans’ coach David Argumosa has “a fantastic group over there. They work extremely hard. We know these guys well. We respect them and wish them nothing but the best moving forward.”

High praise works both ways as Argumosa, returning the respect, said, “They knew our game plan. They knew what we were going to do and were stopping us. Mike [Gonzales] had a much different game plan this time around and it showed. They’re a hellava team.”

When the Tigers closed to within one, 7-6, in the closing minute, “It made it very interesting ,” noted the Spartans coach, “but we were able to hold on.”

Asked if he ever felt comfortable against the Tigers, the smiling Argumosa said when it was all over, “Not at all, even when I got off the bus. It wasn’t an easy game.” 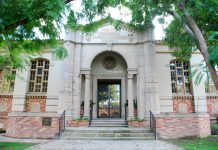