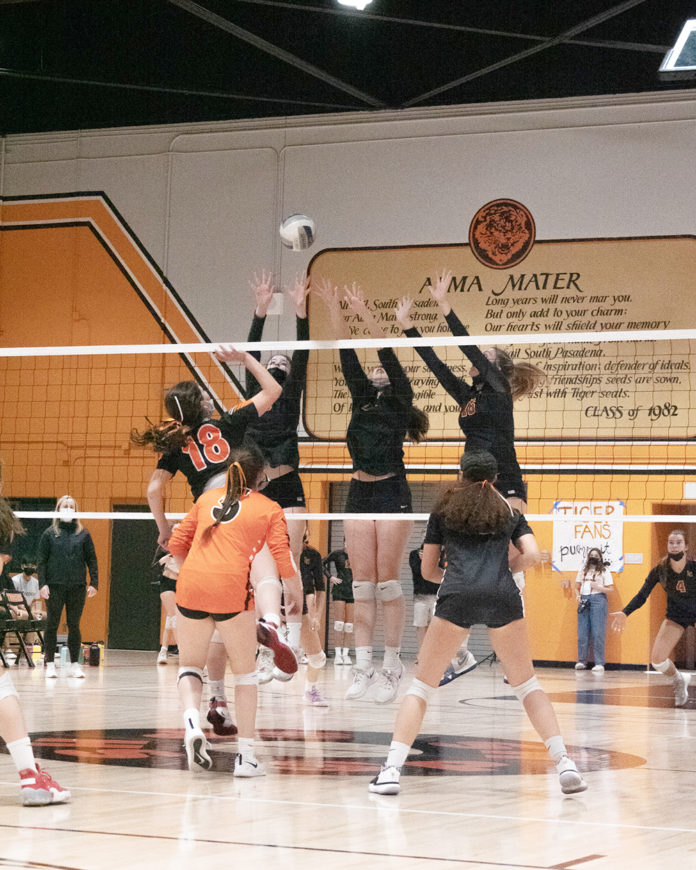 It was a big night for South Pasadena Girls Volleyball on Wednesday evening as the Tigers lost the Rio Hondo title to La Cañada Spartans with a 3-2 loss. Tigers are now 2nd in league heading into CIF playoffs.

It was Senior Night, where Senior players were honored, escorted by their families, in appreciation for all they have done and well wishes for where they are headed. Most of the seniors have played together for four years. Fans were asked to wear white for what they call a “White Out”. The spirit in the stands was exhilarating which had the young women fired up for the game.

Going into the game, the Tigers were in second place looking to take the title after a 5 set nail biter game two weeks ago that took almost three hours. Our Esteban Lopez spoke to some of them before the match.

Outside hitter, Abby Garner (#18), recognized what a big game it was saying, “because we have such a young team, half seniors, half freshman and underclassmen, it would be a really good morale booster for us if we are on top walking out at the end of this. We have a lot of people coming out to support.” She went on to explain her team’s strategy saying, “our motto is one team, one family. We’re really a collaborative team. We love working together. I think that’s what’s gotten us to this point…everyone trusts their teammates to do their jobs. We’re successful because we’re like a well oiled machine, so reliant on each other while also being so confident in ourselves to do our own jobs.”

Head Varsity Coach Ivy Chew said of senior night “it’s a very special night because this is one event that I hold really close to my heart, because I like to show appreciation to every senior that’s played under my program. This is a very special night not just playing against a really great team but also playing to recognize the seniors that have been under my wing for the past four years.”

Chew acknowledged what a big game it was for them and spoke of three key players, her captains, #18 Abby Garner, #22 Kennedy Taylor, and #5 Alyssa Sokolow. “Alyssa was an outside hitter throughout the years and this year, she’s picked up as a libero and she’s a huge pickup because she’s aggressive. We lost a big libero last year, Lindsey Hirano, and she came on as if we didn’t lose a libero, doing exactly what Lindsay would do. Very aggressive, very passionate, very dedicated.” All three of them are four year returning varsity players and Chew goes on to say, “Kennedy brings a huge difference with leadership, what she brings offense wise, she brings a huge, unique type of offense to our team and also puts up a really good defense for us too. And Abby has a huge impact on our team, not just skillwise, but her leadership. The team relies on her a lot on energy, the way she carries the team, the way she leads the team. Everyone looks up to her. And she’s definitely a player that we would really miss having in our program.” All three have been with Chew since she started coaching at South Pasadena four years ago. Chew said, “today’s a very meaningful night for me.”

Of her team she says, “they are the whole, complete package; they have the heart, the passion, the dedication, everything. They are such a great group to coach. You know we’ve always been underrated in the past, especially in 2019 when we were the team that wasn’t even rated and we ended up being the CIF/State. We want to say that we at South Pas can play ball just like anywhere else because like I said, these girls are just so dedicated and talented. I’m really going to miss these seniors that we have. This specific group is very special to me. This group specifically brings out a different vibe of what the season is all about, especially coming off of pandemic season.”

Athletic Director Anthony Chan said of the game “It’s a special moment for these girls. Especially for those seniors, they’ve seen a lot of different things from two seasons ago being on that state championship level where they’re playing for a state championship. And then they won the southern regional championship, to the kind of the progress of South Pasadena volleyball in general and girls volleyball, just constantly getting better and better. It’s a capstone game for them, something they’ll remember for the rest of their lives.”

Chan went on to thank the community for all the support saying, “thank you, from the bottom of my heart. And that comes from me, the coaching staff, the kids, because everybody buys in, right? And when everybody buys in, great things happen. You know, the past couple years, we just continue to get better and better and better. It’s the resources in the community that made this happen, the fundraising efforts, just the buy-in in the crowds. Everybody being on the same page, and it’s the volunteerism, you know, the parents, trying to make things special for the kids, and the kids really buying into the system. When everybody’s supporting your programs, boy, it makes a difference, because then you feel like you’re a part of something. And that’s what I think has happened in a lot of our programs.”

After the game Chan said “it was a tough loss to eat but I think our girls played well but later on, La Canada just came out and played a little better and we kind of let it get away from us a bit.” After being up after three sets, having lost the first set and winning the second and third, Chan went on to say, “things were looking good, but then La Canada came out – I mean I’ve never seen La Canada play that well – they played flawless volleyball. We had a little bit of a struggle in the fourth set, but our players persevered and tried to put some points up. Fifth set was pretty neck and neck with La Canada continuing to play some great volleyball, no errors at all. It was a tough one for our girls but at the end of the day, it’s not always about league championships. It’s nice to win league championships, we’re ending up second in the league, but the goals now are for CIF and State.”

The coming week will bring more work and hard training in preparation for their first CIF game which could be on the 21st. Watch this space for that first CIF game. Go Tigers!