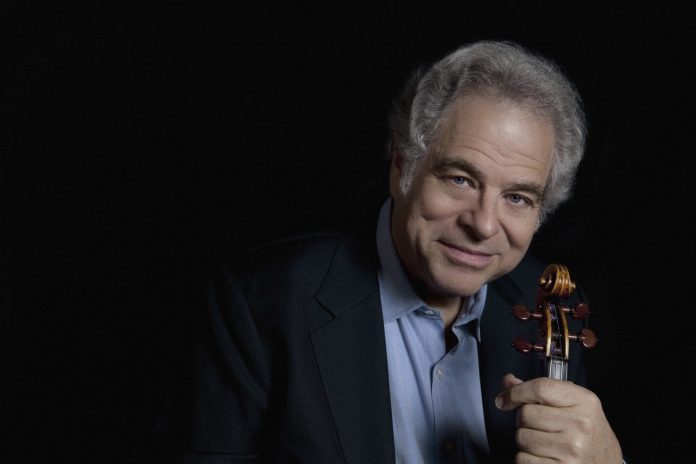 Perlman’s performance launches Violins of Hope, a Los Angeles County-wide collaboration celebrating a collection of over 60 stringed instruments rescued from The Holocaust

Violinist Itzhak Perlman, one of the reigning artists of our day, will make a rare appearance for a recital to inaugurate the Younes and Soraya Nazarian Center for the Performing Arts’ 2019-2020 Season on September 19 at 7pm.  Perlman is accompanied by Rohan De Silva, piano.

“This opening night with Itzhak Perlman will be like no other we’ve had at The Soraya,” said Thor Steingraber, Executive Director.  Welcoming him here is the perfect way to launch the county-wide collaboration and celebration of Violins of Hope, a year-long initiative that brings both a historical and musical resonance.”

Violins of Hope features a collection of over 60 stringed instruments from the Holocaust that were rescued and restored in Israel and will come to Los Angeles for the first time.  Violins of Hope brings together four symphonic orchestras, the Los Angeles Museum of the Holocaust, and The Soraya, to educate and connect audiences – through music and culture – about one of the most tragic events in history.

Itzhak Perlman was awarded a Presidential Medal of Freedom, the Nation’s highest civilian honor, in November 2015 by President Barack Obama for his meritorious contributions to cultural endeavors of the United States and for being a powerful advocate for people with disabilities.

About Violins of Hope

Itzhak Perlman’s performance not only commences the new season, but also starts off Violins of Hope; celebrating a collection of instruments restored by second-generation violin maker, Amnon Weinstein, and his son, Avshalom in their shop in Tel Aviv.

Perlman visited the shop and was moved to say, “On a visit to Tel Aviv, I visited the shop where Amnon Weinstein showed me one violin that had been defaced with a swastika by a German repairman in the 1930s.  Something so ugly, however, could not prevent the violin from creating such beauty. I believe that the violin is a replica of the soul, and these violins more than most are powerful examples of perseverance. They once represented survival for their owners, and they symbolize the same to us today.”

The Soraya is partnering with Niv Ashkenazi, its first Artist in Residence, to share the Violins of Hope program with students throughout Los Angeles. Ashkenazi is a former student of Itzhak Perlman’s and holds the only violin from the collection in North America. He will tour 40-50 public and private schools as part of a year-long Arts Education program.

These instruments will come to Los Angeles for the first time March 22 to April 26, 2020 for a month-long series of concerts, exhibits, and student educational programming; the collection has become widely known after being featured in the documentary, Violins of Hope: Strings of the Holocaust, and a book Violins of Hope: Violins of the Holocaust—Instruments of Hope and Liberation in Mankind’s Darkest Hour.  For a complete schedule and more information, please visit: thesoraya.org/violinsofhopela.

Born in Israel in 1945, just as World War II was ending, Perlman himself was stricken by polio in the war-torn early days of Israeli statehood, and was whisked away to the United States at age 13 to perform on The Ed Sullivan Show.  Today, he enjoys superstar status rarely afforded a classical musician and has performed with every major orchestra and at venerable concert halls around the globe.

Beloved for his charm and humanity as well as his talent, he is treasured by audiences throughout the world who respond not only to his remarkable artistry, but also to his irrepressible joy for making music.

Itzhak Perlman has performed multiple times at the White House, most recently in 2012 at the invitation of President Barack Obama and Mrs. Obama, for Israeli President and Presidential Medal of Freedom honoree Shimon Peres; and at a State Dinner in 2007, hosted by President George W. Bush and Mrs. Bush, for Her Majesty The Queen and His Royal Highness The Duke of Edinburgh. In 2009, he was honored to take part in the Inauguration of President Obama, premiering a piece written for the occasion by John Williams alongside cellist Yo-Yo Ma, clarinetist Anthony McGill, and pianist Gabriela Montero, for an audience of nearly 40 million television viewers in the United States and millions more throughout the world.

In June 2016, Perlman received the 2016 Genesis Prize in recognition for his exceptional contributions as a musician, teacher, advocate for individuals with special needs, and dedication to Jewish values. In 2003, he was granted a Kennedy Center Honor by the John F. Kennedy Center for the Performing Arts in celebration of his distinguished achievements and contributions to the cultural and educational life of the United States. President Clinton awarded him the National Medal of Arts in 2000 and President Reagan honored him with a Medal of Liberty in 1986.

Mr. Perlman completed his initial training at the Academy of Music in Tel Aviv. An early recipient of an America-Israel Cultural Foundation scholarship, he came to New York and soon was propelled to national recognition after his appearance on the Ed Sullivan Show in 1958. Following his studies at the Juilliard School with Ivan Galamian and Dorothy DeLay, he won the prestigious Leventritt Competition in 1964, which led to a burgeoning worldwide career. Since then, Itzhak Perlman has established himself as a cultural icon and household name in classical music.

Perlman recently marked the 60th anniversary of his U.S. debut and appearance on The Ed Sullivan Show, which took place on November 2, 1958. This milestone was celebrated with a return to the Ed Sullivan Theater on November 2, 2018 in a special guest appearance on The Late Show with Stephen Colbert.  This season Perlman performs the Mendelssohn Concerto with Gustavo Dudamel at the Hollywood Bowl and makes season-opening gala appearances with the San Francisco Symphony and Michael Tilson Thomas, and with the Indianapolis Symphony and Krzysztof Urbański. Other orchestral appearances include the Seattle, Vancouver, and Colorado symphony orchestras. As a conductor, he leads the Houston Symphony and Juilliard Orchestra in programs that include works by Bach, Mozart, Schumann, Dvořák, and Elgar.

In February 2019, he made an appearance at Carnegie Hall with longtime friend Zubin Mehta and the Israel Philharmonic Orchestra, the orchestra with whom he has had the closest association since he was a teenager. Spring 2019 saw him perform duo concerts for the first time with the celebrated pianist Evgeny Kissin in Boston, Chicago, Washington D.C. and New York. Throughout the season, he makes appearances with his longtime collaborator, Rohan De Silva, in recitals across North America. In May 2019, he debuted a new program entitled “Evening with Itzhak Perlman” which captures highlights of his career through narrative and multi-media elements, intertwined with performance.

A recent award-winning documentary on Mr. Perlman, titled “Itzhak”, premiered in October 2017 as the opening film of the 25th Annual Hamptons International Film Festival. It was released theatrically in over 100 cinemas nationwide in March 2018, with international releases that followed in Summer 2018. Directed by filmmaker Alison Chernick, the enchanting documentary details the virtuoso’s own struggles as a polio survivor and Jewish émigré and is a reminder of why art is vital to life. For more information, visit www.itzhakthefilm.com. In October 2018, the film made its debut on PBS’ American Masters in a broadcast throughout the United States.

Itzhak Perlman’s recordings have garnered 16 GRAMMY® Awards and regularly appear on the best-seller charts. In 2008, Mr. Perlman was honored with a Grammy Lifetime Achievement Award for excellence in the recording arts.

Mr. Perlman has a long association with the Israel Philharmonic and has participated in many groundbreaking tours with this orchestra from his homeland. In 1987, he joined the IPO for history-making concerts in Warsaw and Budapest, representing the first performances by this orchestra and soloist in Eastern bloc countries. He again made history as he joined the orchestra for its first visit to the Soviet Union in 1990, and was cheered by audiences in Moscow and Leningrad who thronged to hear his recital and orchestral performances. This visit was captured on a PBS documentary entitled Perlman in Russia, which won an Emmy. In 1994, Mr. Perlman joined the Israel Philharmonic for their first visits to China and India.