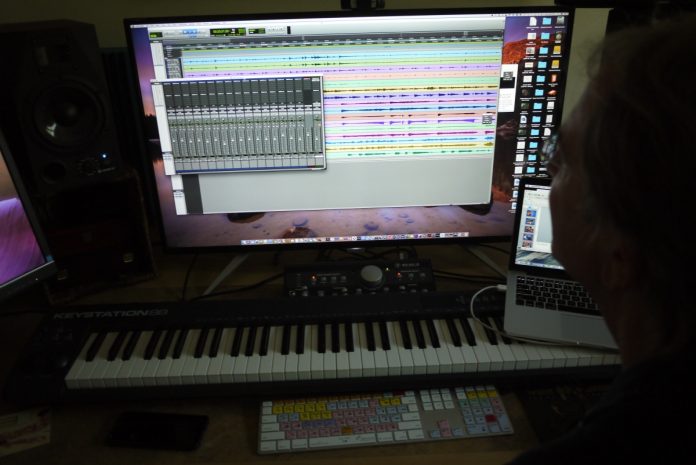 I first met George Oldziey at his music and composition studio off of South Oak Knoll Avenue in Pasadena. On the walls surrounding us are numerous movie posters of some of the most noted Hollywood feature films of the past 2 decades, personally signed by the film’s directors – each with accolades for his musical contribution to the film. Film’s like: Kill Bill 2, Once Upon a Time in Mexico and Sin City. They are all huge box office hits and iconic films of their respective eras.

At the center of the studio is a full-sized 88 key electronic piano keyboard attached to various computers and a wall of high resolution monitors. It is here at this keyboard where Hollywood feature film scores are created.

I watch and listen in awe as Mr. Oldziey calls up an audio file of some of his first film work. This original song was written by director Robert Rodriquez for the feature film Spy Kids 2: Island of Lost Dreams entitled, “Who, What, When, Where and Why?”.

Mr. Oldziey set up the sound clip with his story of meeting Mr. Rodriquez: “A friend worked for a company that Robert Rodriquez had invested in. Literally two days after I had given my friend a demo CD of my work, Robert Rodriquez walked in and started poking around and asked my friend: “Do you know anyone in Austin who knows how to orchestrate?”. My friend Martin handed him the CD and replied, “Yeah my friend George. He’s the best in town.”. My friend called right away and told me he had given my CD to Robert Rodriquez. I didn’t hear anything for weeks – so I assumed he must not have liked it.”

“Then out of the blue my cell phone rings and it’s Robert Rodriquez. He said: “Hi this is Robert Rodriquez. I listened to your demo and I really liked it. Can I come over to your studio sometime and talk about stuff?”. I said, “Sure – when do you want to come over?”. He said: “Can I come over now?”. Shortly thereafter he sent me an mp3 with his original version of the song. He wanted a big orchestral background to back up the actor who would sing the song, Alan Cummings.”

Mr. Oldziey plays me the Robert Rodriquez version of the song. Then he plays his own final version sung by Alan Cummings. The transformation is nothing short of miraculous. I find myself transported back to 2002 watching the film Spy Kids 2: Island of Lost Dreams with my children. The song is a catchy and memorable piece of the film’s history. Hearing the original recording of the film’s director, Robert Rodriquez, personally singing his rough cut of the song – followed immediately by the final musical arrangement by George Oldziey which appeared in the film is mesmerizing.

You can see the scene from the film and listen to Mr. Oldziey’s final composition below.

That meeting with Robert Rodriquez and the subsequent film project turned out to be George Oldziey’s big break. He had no previous feature film scoring experience. However from that point forward he went on to score numerous Hollywood features for A-list directors. His film credits include: Spy Kids 2 and 3, Kill Bill: Vol. 2, Sin City, The Adventures of Sharkboy and Lava Girl, Grindhouse, Plant Terror and many other films. George Oldziey has also been prolific in scoring video games including some of the most iconic games from Electronic Arts. A portion of his work includes: Wing Commander III and IV (featuring Mark Hamill) and the Ultima and Crusader series.

George Oldziey began his illustrious professional music career by way of the trumpet at the tender age of 15. He went on to attend the Manhattan School of Music (MSM), where he played first trumpet with the MSM orchestra. While at MSM, George studied trumpet with Cecil Collins, William Vacchiano and Mel Broiles, as well as conducting with Anton Coppola (uncle of Francis Ford Coppola).

Now George Oldziey is giving back by sharing his vast experience and talent to guide those who wish to pursue feature film scoring as a vocation. He is accepting applications for a limited number of new students who possess the true passion and persistence to chase the dream of creating musical scores for Hollywood feature films.

Mr. Oldziey explained the prerequisites for potential students, “I’m a big proponent of standard music theory. However, I’ve worked with students of all ages and all experience levels – so I tailor my lessons to someone’s experience level. I’d first like to meet each prospective student and talk about their experience. It’s important to understand what their goals are. It’s not an easy thing to accomplish so I’d like to see that the student is dedicated to spending some time working on their craft at home. In other words, they would need to have that discipline in their life to sit down for an hour or two each day and study film scoring.”

If you are interested in being considered as a new film scoring student with George Oldziey he can be reached in the following ways: