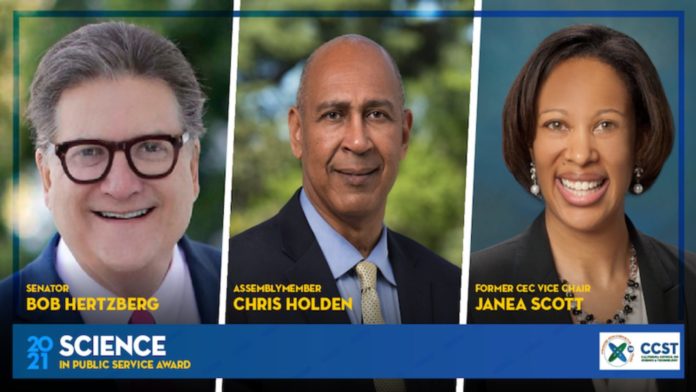 The California Council on Science and Technology (CCST)is proud to announce the recipients of the 2021 CCST Science in Public Service Award.

Senator Hertzberg has been a strong advocate for the use of science in public decision making and has continuously promoted policies to advance science and technology solutions in California. As Senate Majority Leader, Speaker of the State Assembly, and throughout his career, he has been an ardent supporter of evidence-based policymaking to implement long-term solutions to California’s needs.

Senator Hertzberg has also been a dedicated mentor and host to PhD scientists as CCST Science & Technology Policy Fellows. A champion for the program, Senator Hertzberg’s support enabled more Fellows and additional placements each year — creating more opportunities for scientists to make career transitions into public policy in California.

Throughout his career, Assemblymember Holden has supported legislation that protects the environment and furthers California’s leadership in science and technology. As Chair of the Assembly Utilities and Energy Committee, he has worked to make California meet its energy demands while ensuring reliability, worked to integrate renewables, and continued to map a path toward carbon neutrality that is based on science.

Assemblymember Holden has demonstrated dedication to the use of science in informing public policy decision making, mentoring and hosting PhD scientists as CCST Science & Technology Policy Fellows on the committee and in the Legislative Black Caucus—opening the doors to their careers in public policy.

“The California Council on Science and Technology plays an important role in the decisions we make. When the stakes are so high on the biggest challenges we face, whether it’s climate change or public health, science informed policy is critical to achieving our necessary and ambitious goals. I’m honored to be recognized by the California Council on Science and Technology and grateful for the Science Fellows who have worked in my office.”

During the course of her career, former Vice Chair Scott has worked to advance science and technology in California and at the federal level. As a Commissioner and Vice Chair on the CEC, she consistently championed energy policies with a basis in science and has supported continued funding in research and development throughout the state. Her work on the Department of Energy’s Hydrogen and Fuel Cell Technical Advisory Committee and work in support of the Electric Program Investment Charge4$ (EPIC) program has led to many research advances in wildfires, microgrids, and clean transportation and energy.

Former Vice Chair Scott recently accepted a position in the Biden-Harris administration as Counselor to the Secretary at the Department of the Interior. Read the announcement HERE.