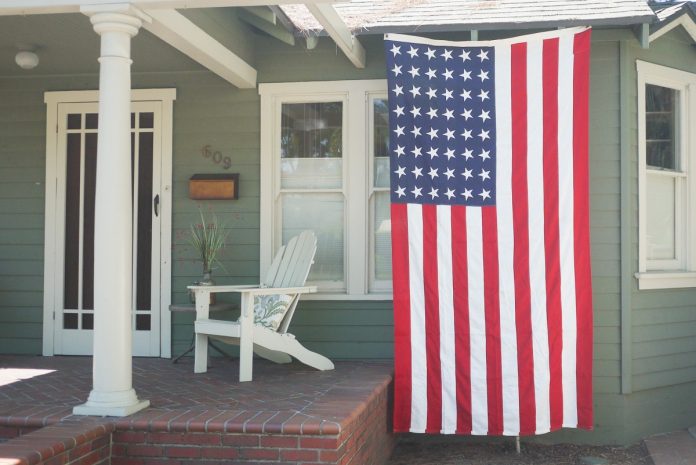 This story begins for me on the 4th of July, 2017 as I was walking to the Annual Festival of Balloons celebration and parade in the morning. As I walked up El Centro Street here in South Pasadena, I noticed a rather large flag hung in the front of a neighbor’s house and I took a snapshot of it. I didn’t realize it at the time, but the flag had only 48 stars.

I later bumped into my neighbor and inquired about the flag. Here is the story of that 48 star flag.

John Short was a college-educated mortician in Southern Illinois when World War II broke out. Like most American men at the time he was struck by the inevitability of war and the injustice threatened upon the United States and the free world. He knew that he had to act. But he was running a business and had family matters to attend to, so his entry into the war was delayed until the aftermath of the Normandy D-Day invasion. He was 30 years old when he joined up in late 1942, and due to his background as a mortician he was assigned to train as an army medic.

As fate would have it, John Short was placed in an illustrious unit at a pivotal time and place in history. The Allied forces had recently stormed the beaches of Normandy in France in some of the most hard fought and bloody battles of World War II. The mission that John found himself engaged in was to fight forward from France to the heart of Nazi Germany in Berlin.

John Short was assigned to the Third United States Army which was commonly referred to simply as the Third Army. His division was commanded by General George S. Patton. General Patton’s strategy was to blaze a trail through enemy territory straight into the heart of Nazi Germany. Beginning just after the Normandy D-Day invasion General Patton and the Third Army began their “great dash across France”.

As a medic in training, John Short never carried a gun. During training his army buddies made good-natured fun of this soldier who was going off to war without a gun. However, his fellow soldiers became deadly serious about protecting John Short when in battle, as he was all that may have stood between them and certain death if they were to be wounded.

During the push across Europe in World War II John Short served bravely and was wounded twice. The first time he was shot in the heel by a sniper while working to save other soldiers.

The second time was to prove much more serious. In 1944 while the Third Army was moving through Luxembourg on their drive to Germany, one of his company was hit. While struggling to save his fellow soldier, a German mortar round hit directly on John Short and went right through him. The blast effectively took out one of his lungs and a fragment lodged in his elbow.

As a consequence of the severity of his injuries, John Short was transferred through seven Army field hospitals between Luxembourg and England in an attempt to save his life. Though near death, he was saved by doctors who removed his shredded lung and stabilized him. Though John emerged from the war and lived – he never again fully regained the use of his left arm. He also lived with a single lung for the rest of his life.

John Short was awarded the Purple Heart for the injuries sustained as a result of his unselfish actions. The Purple Heart is awarded members of the Armed Forces of the United States who have been wounded or killed in action.

It was as a result of his war injuries, and that single lung, that John Short died. Shortly after the birth of his son – also named “John Short” after his father – John Short the senior contracted pneumonia. With only a single lung to fight for air, John Short succumbed to his ailment and died in late October, 1956. He was just 42 years old.

John Short was given a military funeral and as is customary, his casket was draped with the United States flag. The flag is furnished to honor the memory of a soldier’s military service to his or her country. After the playing of Taps, the flag is ceremonially folded and then presented as a keepsake to the next of kin. The ceremonial folding and presentation of the flag is regarded as a moving tribute of lasting importance to the veteran’s family. In the case of John Short his flag was presented to his wife, Florence (Jackie) Short.

John Short, Jr. now displays his father’s flag in South Pasadena on patriotic holidays, including the 4th of July. When asked what he wanted people to think about when seeing his father’s flag, John Short replied:

“My dad was a civilian soldier. These were people who didn’t know one end of a rifle from the other and stepped in to do what they had to do. In World War II a whole generation of Americans went over there. My dad was one of them – and sacrifices were made. We always have to thank people for their service – no matter what. Because soldiers go into this not having any control over what politicians do. While we might not agree with every U.S. conflict, we have to separate the people from why they’re there.”

This 4th of July, let us not forget all the great Americans who have put themselves in harm’s way to preserve freedom for us all. Think of them when you see the United States flag – whether it has 50 stars or only 48.