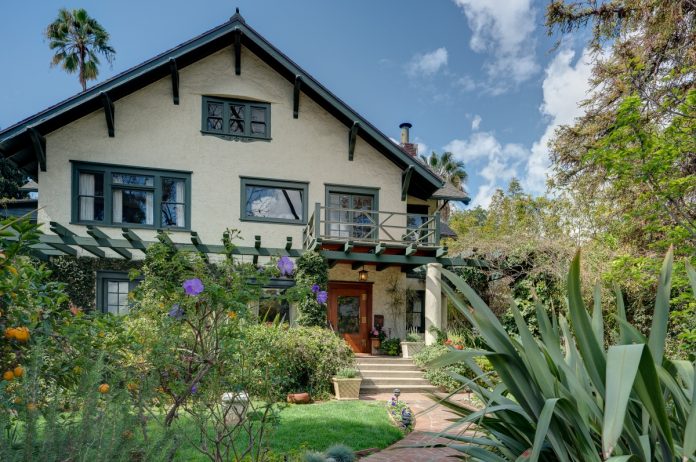 Derek: “You have got to be kidding me! Look at the scale of that work of art on the master bedroom ceiling. That’s unbelievable! I’ve never seen anything like it.”

Carolyn Watson: “Yeah, and there’s another mural just like it painted on the other bedroom ceiling.”

Derek: “Who painted them?”

Carolyn Watson: “No one knows.”

So started my discovery of the historically significant property at 415 Oaklawn Avenue in South Pasadena.

415 Oaklawn Avenue was recently listed for sale by Michele Downing of Pacific Union with an offering price of $3.375 million – the property has now sold. The sellers were Craig and Carolyn Watson – longtime residents of South Pasadena with a family history in the home dating back to the early 1900’s.

The home is large, containing 5 bedrooms and 5 bathrooms in a magnificent structure. Per the county assessor the house is approximately 4,470 square feet. The historic structure is well placed on a large 28,038 square foot lot with beautifully restored historical gardens cascading out around and in back of the property. To understand this home is to understand the origin and development of Oaklawn Avenue itself.

Oaklawn Avenue was conceived by renowned architects Charles and Henry Greene around 1904. The Greenes were already known in the greater Pasadena area and their patronage of Oaklawn Avenue would propel its financial success. The Greenes went on to develop the original entrance portal to Oaklawn (described as a Cobblestone Gateway in the original sketches from 1904), the Oaklawn Street Bridge and waiting station, and also designed 6 craftsman homes for the project. At the time of initial construction and development, the building lots on Oaklawn were among the most expensive in the San Gabriel Valley. Oaklawn Avenue is currently designated as an Estate Street by the City of South Pasadena.

In a sales brochure produced by G. Lawrence Stimpson, the Oaklawn Avenue development was originally promoted as being, “Within one block of the Hotel Raymond and the Pasadena electric short line to Los Angeles”. Additionally, the Oaklawn sales materials touted, “Here the city dweller will find the accustomed conveniences such as electricity, gas and telephone.”

The home at 415 Oaklawn Avenue was built during the early development phase of the Oaklawn project and completed in 1907. It was one of the five original homes on Oaklawn Avenue. The architectural firm for the project was Dennis and Fairwell of Los Angeles. The earliest official records of the structure are from the district office of the Los Angeles County Assessor. On October 27, 1920 an assessor visited the property and made the following notes about the structure. The assessor noted a single one-story bungalow with the garage portion creating a partial basement. The building had a stone foundation and an exterior of plain wood. There were five plumbing fixtures. The interior finishes were described as both “plain” and “special”.

The first owners of 415 Oaklawn Avenue were Frank Cattern and his wife Clara Cattern. Mr. Cattern was an attorney originally hailing from Iowa. The home at 415 Oaklawn is also sometimes referred to as the “Cattern House”.

Former owners, Carolyn and Craig Watson described some further history of the home and the process of restoring the original 1907 structure and grounds to magnificence: “The extensive rear gardens were designed by Kate Sessions, perhaps best known for her design for Balboa Park in San Diego. Original photos of the garden designs exist in the collection of the Huntington Library. The Catterns wanted the grand entrance for gatherings and today the owners continue that tradition with concerts and large events in the great hall.

There is a new outdoor kitchen with pergolas overlooking the restored pool and upper gardens. The front gardens with rock walls and iron gates were designed to blend in with the original design of the historical Greene and Greene entrance to Oaklawn.”

415 Oaklawn Avenue was just recently sold to new owners. This piece of South Pasadena’s history is now being passed to new stewardship to preserve its legacy for future generations. We wish them well.