Halloween is a very special time of the year for South Pasadenans; not only was John Carpenter’s original ‘Halloween’ filmed here in 1978, but when I was growing up Halloween was a big deal.  With that in mind I was beyond excited to go to Los Angeles’ Halloween Convention, ScareLA and I wasn’t disappointed.

Fog and gigantic Jack-o-Lanterns greeted us as we entered the hall at the Los Angeles Convention center.  Screams from various haunts could be heard.  People in costumes were everywhere.  Booths selling art work, literature, clothing, movies and just general Horror Movie collectibles filled the hall.  The hardest decision I had to make all weekend was: where do I start?

I cannot stress how amazing every single person at this convention was.  From the people who ran it to the actors in their booths signing pictures.  Everybody was there in support of Horror and that community is very loyal to it’s own.  I had never been to a convention where I met people so easy to connect with who were so happy just to be celebrating Halloween a few month early.

The Costumes were fantastic.  Lots of scary Clowns and my personal favorite, Scarecrows. Some characters you already know like Michael Myers and some from the dark minds of the con goers. I adored the enthusiasm in which people throw themselves into their own ideas and designs; getting a chance to see such unique creativity left me feeling inspired and it just wasn’t for adults.

As much as I have always loved Halloween it’s always held a special kind of magic to children and ScareLA is age friendly.  Children in costume, booths for them to do art work or make masks were everywhere.  The haunts were scary and a little bloody but that’s part of the fun when you’re a kid.  While I certainly wouldn’t suggest bringing a child under 7 or 8, there was plenty for children around that age to do with getting just the right kind of scare.

There were also some top notch actors at the convention.  Tim DeZarn was there promoting his new film Buckshot which can be found on iTunes, Amazon, Google Play, YouTube and Cable and Satellite on Demand.  Tim has been in a number of projects including one of my all time favorite movies ‘Cabin In The Woods’ as well as the popular prequel to the remake of the Texas Chainsaw Massacre, Texas Chainsaw Massacre: The Beginning.  He’s a fantastic actor and a real pleasure to get to meet.

Another actor and the one I was the most excited to get to meet Robert Allen Mukes was there.  Signing photos and chatting up with his fans it was so refreshing to see somebody of this caliber so approachable.  Getting to shake his hand was a definite highlight of the convention for me.

The haunts themselves were well designed and tons of fun.  In the Pandemic Haunt you had to get through the maze while not getting touched by any zombies. At the end they scanned you for infection, those clean were led out of the maze safely while others, like myself, weren’t so lucky.  I was pulled aside where I had to dance before soldiers brought out fake machine guns to shoot me down!  Afterwards they stamped my hand INFECTED so everyone knew.  It was a very creative angle on the Zombie theme.

There were also so many panels and stage shows to see.  From Linda Blair to George C Romero,  VR experiences, a Silent Scream Disco, makeup demos and screenings.  There was literally too much to catch in one weekend which to me is a good thing; I wanted more at the end of both days.  Bands like The Rhythm Coffin were also rocking just outside of the main hall as you entered.

I literally cannot speak highly enough of ScareLA and all the people who participated.  If there’s one convention that I would go to every year it’s this one.  I can’t wait to watch them grow more and get larger, they certainly deserve it.  It is absolutely now on my yearly to do list and will continue to be for as long as it’s running.  If you love Halloween and Art that is Horror you can’t miss this con.  I’m already excited for next year.  My only regret is I was unable to see everything.  See you next year Boils and Ghouls!

Just Some of The Many Booths that I was able to see:

Light Up Masks – Masks that light up.  For you Purge fans out there. Accessories too.

Pheran Couture – Dark Accessories hand made and used by such artists as Nergal Darski and Derrick Green.

The Ruby of the West– Neo-Vicrorian Merchantile.  Clothing, perfumes and jewelry. 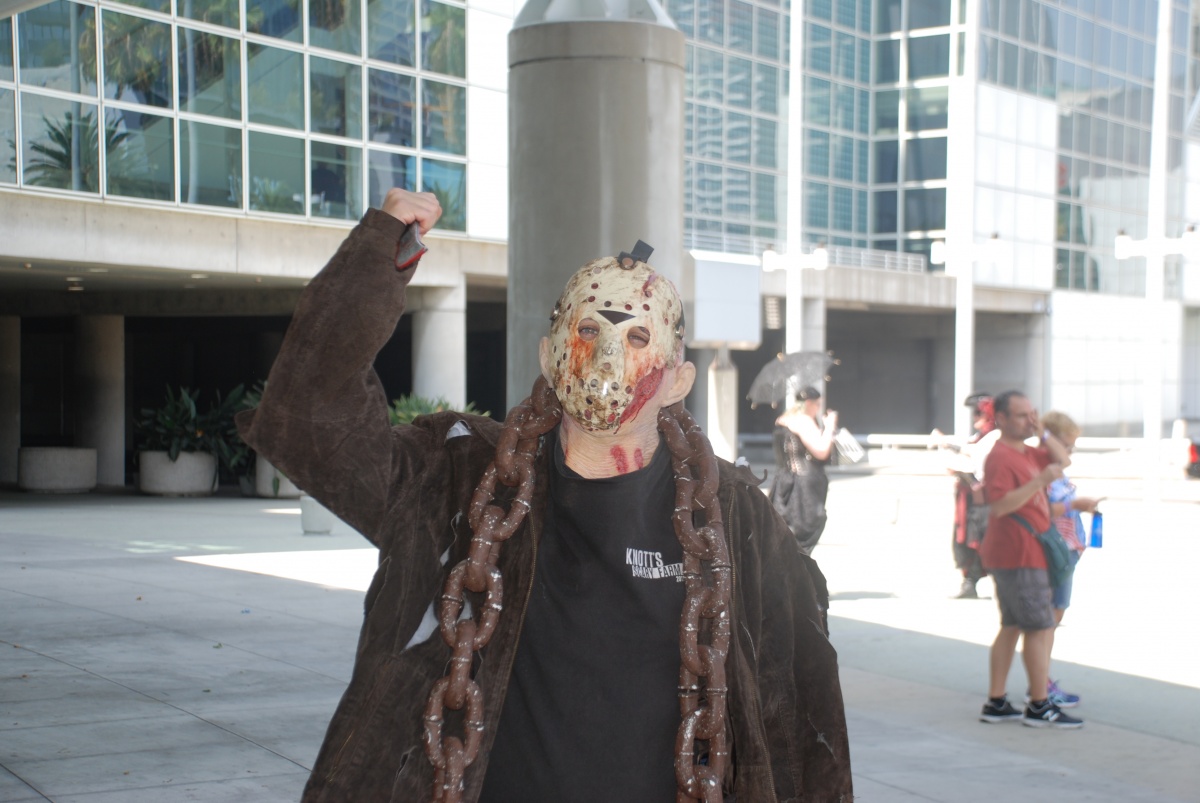