Activists are holding a rally to support hazard pay for retail workers in South Pasadena and Pasadena on Saturday March 13, starting at 10:30 a.m. Bring a sign, a friend, your kids & your noisemaker of choice!

11:15 a.m.: Caravan north on Fair Oaks, east on Colorado, and north on Lake to the Ralph’s at Lake and Walnut.

Please share widely to help us generate great turnout. City leaders need to know we support this. The grocery associations are fighting local hazard pay ordinances tooth and nail. Kroger announced it will close stores in retaliation, with the greatest impact on impact Black and Latinx communities. Amplify the boycott against Kroger.

We will have some sign-making supplies and markers for car windows at Pavilions in South Pasadena, but you are encouraged to make and bring your own sign. 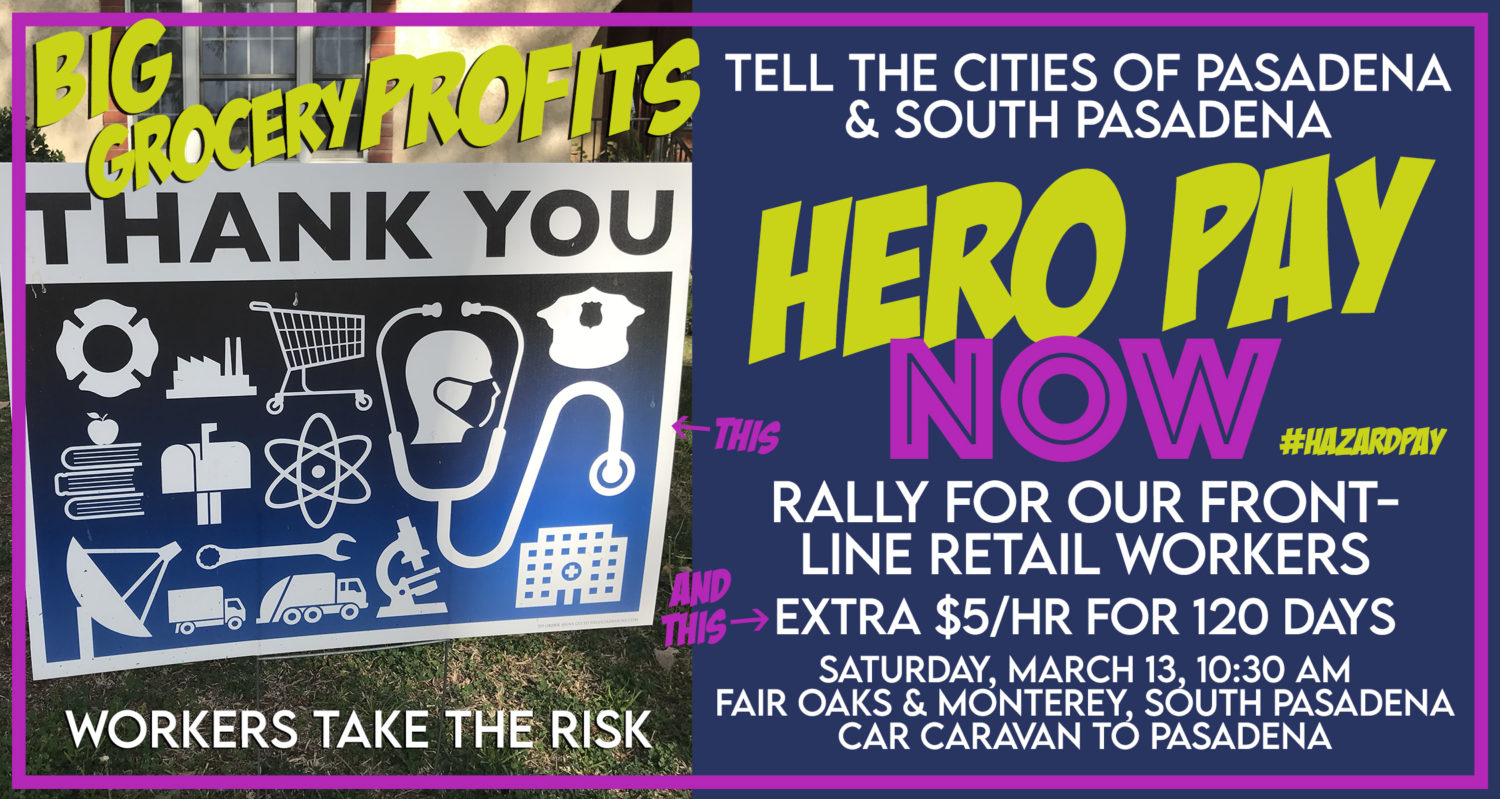 Armed with sharpies, residents Helen Tran, Anne Bagasao, John Srebalus, and Ella Hushagen, inscribed the names of South Pasadena Councilmembers on individual grocery-laden bags. Stationed under a banner thanking frontline workers displayed front and center in front of City Hall, the mission was to successfully deliver the packages — and more importantly, a message — to City Council.

Digging deeper through the contents, amongst the Peeps and peas, was a letter (page 21 in the packet) with nearly 150 signatories, supporting a demand to instate hazard pay— more contemporarily referred to as Hero Pay — in South Pasadena.

“We want to show the Council Members who’s packing the groceries and who’’s making it possible for all of us in the community to get food during the pandemic,” Tran told the South Pasadenan News. A member of Carefirst South Pasadena, she explained the symbolism behind the visit; each of the bags emblazoned with familiar grocery logos represented “the workers who are working locally in six of the major retail stores here in South Pasadena,” those being Ralphs, Pavilions, Vons, Trader Joe’s, Grocery Outlet, and Bristol Farms.

The significant list of supporters was submitted as public comment for the March 3 Council meeting, supporting an ordinance that would entail a possible $4-5/hr wage hike for retail workers. The letter also implores City Council to follow up on a January 20 motion by Mayor Pro Tem Michael Cacciotti for staff to draft such an ordinance. “The momentum behind local hazard pay ordinances is growing due to congressional stalemate and breathtaking profits by major retailers,” reads part of the submitted statement.

This all comes hot off the heels of a landmark decision to pass an urgency and temporary ordinance that “requires larger grocery retail and drug retail stores located in the unincorporated areas of Los Angeles County to pay their employees no less than $5-per-hour hazard pay in addition to the employee’s base wage” by the Los Angeles County Board of Supervisors on February 23.

“While many sectors were able to transition their workforce to working from home, millions of workers in face-to-face service industries were deemed ‘essential’ to ensure that our communities continue to operate, and basic needs continue to be provided for. Notably frontline grocery and drug retail workers are two categories of essential workers who have continued to show up for work despite the potential exposure through interactions with customers and co-workers who may have contracted the virus,” states the motion, co-drafted by LA County Supervisors Hilda L. Solis and Holly J. Mitchell.

In what can be considered a tumultuous legal tug-of-war, proponents fighting to better provide financial restitution to frontline workers can tally last Tuesday’s vote as a victory, albeit with some noticeable resistance. The legislation has met its share of high profile detractors, with some corporations and politicians making cases against the uptick in pay, arguing it would hinder local economies over time, may contribute to closures for some locations, and lead to price inflation for products.

In early February, as more opposition galvanized, Kroger Foods — which owns franchises Ralphs and Food 4 Less — closed two Long Beach locations, insisting that the stores were already taking significant financial hits and would not be able to meet the cost of increased hazard pay for its employees. However, many have posited that this is in direct retaliation to the City of Long Beach’s decision and against essential workers’ rights.

Kathryn Barger, who serves on the LA County Board of Supervisors, remains a staunch opponent of the county ordinance, voting against it and breaking a unanimous vote, resulting in a 4-1 tally.

The California Grocer’s Association continues to be a major adversary for hazard pay as well, having filed a lawsuit against Long Beach in January, but ultimately being rejected on February 25, when the federal district court denied their motion for a “preliminary injunction to temporarily overturn the Long Beach hero pay ordinance.”

On the South Pasadena front, Councilmember Cacciotti, during Wednesday’s Council meeting, did acknowledge the bag of groceries sent to his home, briefly mentioning a “grocers group” and the attached letter supporting Hero Pay. Cacciotti foreshadowed that the motion “will some time be coming back to us,” but elaborated no further. No other council member that evening addressed either the motion nor the broader issue at hand throughout a packed, 4-hour long agenda.

The City of South Pasadena technically holds some autonomy presently, as LA County’s new jurisdiction currently only applies to unincorporated areas. It is uncertain at the time of publication if, or when, the City will seriously discuss a hazard pay option.

South Pasadena contains 6 grocery stores that may be obligated to provide the pay bump to its workers if it were to see any future ordinance similar to LA County’s. Additional business such as Rite Aid may also fall under its authority, meeting existing criteria which “applies only to grocery stores, drug stores, or large retailers that sell groceries or drug products:

The Los Angeles County Department of Consumer and Business Affairs (DCBA) will accept and investigate claims from workers of alleged violations of the ordinance, which will be in effect for 120 days.

Additionally, the disproportionate rate in which LatinX and Black communities are affected by COVID-19 must be factored in when considering a motion that would apply to a significant portion of grocery store employees in South Pasadena, some of whom must commute from these more profoundly affected neighborhoods. Local hero pay supporters mention this as a pivotal aspect, saying “The pandemic’s racial and ethnic disparities are caused, in part, by the heightened risk of infection to essential workers, such as grocery store workers who are more likely to be Black and Latinx,” once again, referring to the Brookings Institution study.

Trader Joe’s serves a blueprint of sorts for company-enforced pay hikes. Prompted by the City of Seattle’s decision in early February, the popular grocery chain implemented the “thank you pay” policy for their roughly 500 national locations. The increase came with a caveat however, as midyear raises for approximately 10,000 employees were sacrificed in the tradeoff.

This time last year, frontline workers were being lauded for their commitment, but a lingering question remained after all the fanfare and pats-on-the-back. How would that appreciation translate into any tangible support for employees that had no respite from their workplace in the opportunity to work remotely? While some initiatives rallied communities to donate to funds aimed at supporting them, there virtually existed no specific safety nets designated for retail workers in response to the COVID-19 pandemic for the better part of the past year.

Speaking on behalf of many, the South Pasadena Hero Pay letter closes with an entreating, succinct statement, “We urge South Pasadena to put teeth behind its widespread yard signs thanking essential workers for their service. Agendize an urgency hazard pay ordinance for the March 17 City Council meeting.”

“I think it’s late, but also, it’s never too late. The pandemic isn’t over,” says Tran, who reminds everyone that “people are still working at the grocery stores each day and we can be in the comfort of our homes being safe, still getting food and having groceries delivered to us. (This) is still a relevant issue, and the city has an opportunity to really make a difference.” Anticipating a scenario in which the City does not take concrete action, the group simply is “going to continue pushing,” she resolutely maintains.