“If you like mysteries, if you like suspense, if you like to try to figure out what happens next, this show is for you!” So says veteran theatre actor Bradley Armacost of the experience that is The Woman in Black which will premiere October 17 at Pasadena Playhouse. It’s a play befitting this Halloween season as it promises chills, thrills and elicits shrieks from the audience.

Adapted for the stage by Stephen Mallatrat and based on Susan Hill’s gothic ghost story, The Woman in Black is the story of Armacost’s character, Arthur Kipps, a man who went through something terrifying and life-altering when he was a young man and has now written his story down to try to explain to his family why he feels they are cursed and why he is so obsessed by this mysterious woman. Kipps seeks  the help of a young actor, played by Adam Wesley Brown, to help exorcise this terrible story that happened to him.  As Kipps recounts the story, the young actor suggests that they create a performance of it. The two actors become all the different characters in Kipps’ story and, incredible as it may seem, they manage to create an absolutely terrifying theatrical ride that has audiences literally shrieking in fear!

When Adam Wesley Brown told friends he was auditioning for The Woman in Black he says, “their eyes lit up and they told me I had to kill that audition because it’s such a fun show. Once I got the script, I was hook, line and sinker. As I read it I found myself saying, “wait, we do WHAT on stage? How do we do what?!” It is so much fun every night.”

The actors tell us that there are several moments when the audience collectively gasps and Armacost recounts, “one of those moments happens when I’m off stage and the other evening a woman squealed so loudly that I was just giggling off in the wings, it was so cool to hear Adam getting that huge reaction. The audience brings to the evening their fun desire to be scared and to hear a scary story.”

Brown echoes that sentiment saying, “the audiences are really attentive and are really with us every step of the way. It’s a lot of fun when you’re doing a spooky play and you get these great vocal reactions.” He went on to tell us, “Our director, Robin Herford, told us not to be concerned if the audience is quiet and sure enough the other night we had an audience that was dead silent for the first half and Brad and I got off stage and said, “oh boy it’s a tough crowd tonight”, and then at the end of the show they were immediately on their feet.” He explains, “they were with us the whole way but they were so tense that nobody said a word until the end and it was an amazing feeling.” Both are quick to point out that there is no gore or blood on stage. It is simply pure suspense and terror!

Armacost says, “I’ve just been delighted by the reception of the audience! It’s like old time radio so that box on stage becomes a ponytrap, that little cane chair is all of a sudden in a dark study in a scary mansion;  the audience becomes a third character.”

It’s the first time doing this play for both Armacost and Brown who are Chicago based actors and both tell us they were thrilled to be able to rehearse the play in Chicago and very much look forward to becoming a part of the Pasadena Playhouse legacy.

Armacost was drawn to the opportunity to work with the original director, Robin Herford, and to be a part of the first US tour of the original production, which recently saw it’s 12,000th performance. The West End smash hit has been running in London for the past 28 years with over 8 million people having lived to tell the terrifying tale of The Woman in Black. 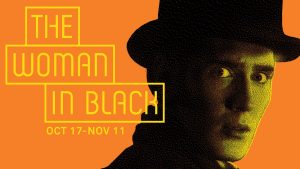 Although he had never seen the show, Armacost says, “I was aware of this sleeper, little, spooky show running in London for years as well as the novel and the 2012 film but when I was cast I decided to only read the play and, in retrospect, I’m glad I did because they are three completely different creatures.”  He went on to say, “the play takes advantage of both the breadth of the film and the simplicity of the novel. We are two actors, a couple of chairs, a box and a couple of doors who manage in the course of an evening to take you through the marshes and northern coast of England, on trains, horsedrawn carts and through a huge, old, scary mansion!”

Brown says he and Armacost hit it off immediately, “it is so much fun to be up there with him every night and to go on this journey with the audience, the third member of the cast, and every night is different. There’s a beauty of theatre that I love so much where as a collective unit, we all get together and we create this story at this one time; and then it happens and it never happens again like that. The magic is that the night you see the show that’s the only time that show will happen like that ever.” He continues, “it’s an epic tale we get to tell night after night with new people each night. It makes it so fresh and so new for us on stage.”

Brown calls The Woman in Black a “love letter to theatre” and the production is a testament to the ingenuity of writer Stephen Mallatratt and the direction by Robin Herford explaining, “with two chairs, a box and a doorway we fill the stage with our own imaginations and we end up telling this huge story.”

The film version starred Daniel Radcliff and in talking about the intensity of live theatre, both actors mentioned an experiment that was done in London as both the play and the film were running simultaneously. Heart monitors were hooked up to audience members at the theatre and in the movie house and it turned out that the theatre audience members had higher strikes throughout the experience. So put down your devices, turn of your TVs and head over to Pasadena Playhouse this month to be scared out of your wits and take the wild ride that is The Woman in Black!

The Woman in Black is on stage at The Pasadena Playhouse, 39 South El Molino Avenue, Pasadena, CA 91101 Wednesday, October 17 to Sunday, November 11

Premium Package
See The Woman in Black followed by a live recording of the podcast Hollyweird Paranormal. Learn about Playhouse hauntings and ghost lore while enjoying a wine on the house. Oct 30-31. Packages start at $65. PasadenaPlayhouse.org 626-356-7529 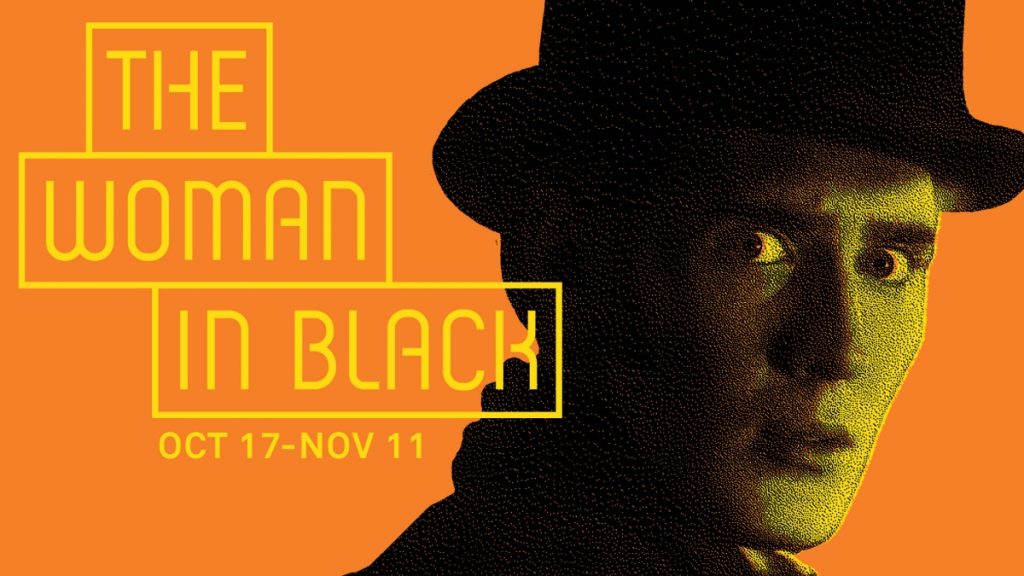