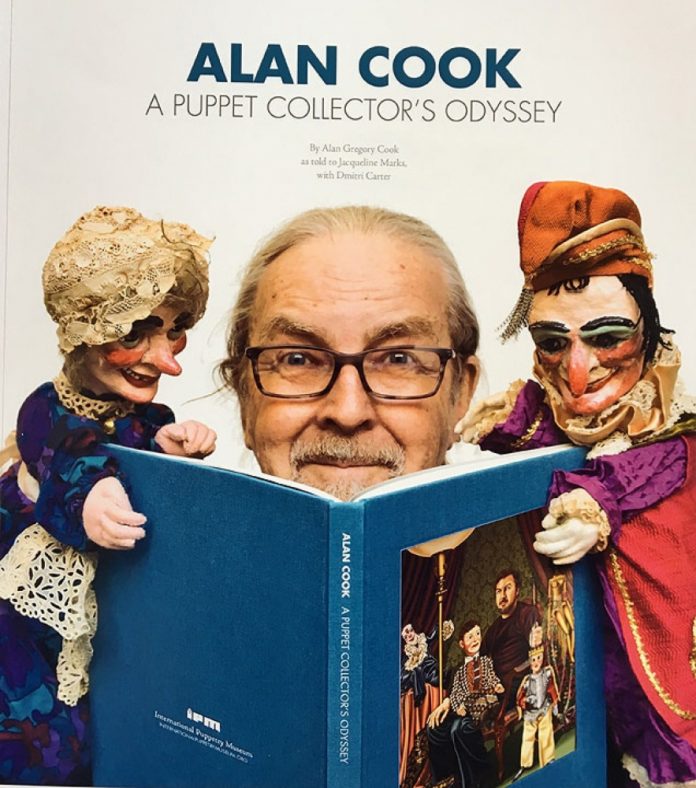 Collector extraordinaire Alan Cook, along with his collaborator, Jacqueline Marks, a sculptor and printmaker, has just published a long-awaited masterpiece, “Alan Cook: A Puppet Collector’s Odyssey.”  It’s a luscious oversized art book that amply demonstrates that Alan is a walking encyclopedia of ‘all things puppet’. The Cook book chronicles 80+ years of collecting and contains more than 100 stunning photographs. The labor of love depicts scenes and major finds from Alan’s incredible personal odyssey during which he has collected more than 5,000 puppets and 1,000 books and magazines. The book on the endangered theatrical art form was written during Alan and Jacqueline’s regular visits to the South Pasadena Public Library over the last two years.

Now in his mid-80s, Alan Cook grew up in South Pasadena and attended Oneonta Grammar School where he attended puppet classes conducted by the WPA (Works Progress Administration) which was trying to get artists and theater people back to work after the depression. The classes influenced Alan to join the school’s puppet club. During World War II, when a shortage of materials for toys existed, Alan was still able to buy cardboard puppets, but they did not last nearly as long as his passion for collecting the hand-operated, non-human actors.  During the 40s, puppeteers were big time television stars with shows like “Howdy Doody” and were regularly featured on the “Ed Sullivan Show.”

Alan’s first puppet was a Dutch Boy Marionette made in Los Angeles that was purchased by his mom at a J. W. Robinson’s Department Store. Since then, Alan has traversed the country as much as his personal finances have allowed, and put together an amazing collection that may actually be closer to 6,000 puppets. The ones that he could not afford to buy were given to him and they’re a part of a unique, diverse collection of international importance that is now finally being more widely recognized. Alan declares that one of his “life’s blessings was joining the Puppeteers of America as a junior member in 1947 and attending their 1948 festival, later serving two terms on the P of A Board, and toured two and a half years from 1980 to 1983 with the their exhibit which visited 11 museums.”

While attending South Pasadena High School, Alan produced his own puppet shows in his living room for neighbors and friends. He placed announcements in the South Pasadena Review and managed to get a write-up in the Pasadena Star-News. When Alan graduated, he received puppetry books as gifts. At Pomona College his history professor gave monetary prizes to students to develop their personal libraries, and Alan used his, unsurprisingly, to buy more puppetry books.

Alan’s passion for puppets has taken him all over the country and he’s formed friendships and working relationships with many of the legendary puppeteers of the last century. Alan was relentless in seeking out, acquiring, and preserving noteworthy puppets that truly encompass all styles. In essence, he saved lots of sometimes fragile, threatened puppets from extinction. Alan’s pursuits included presenting puppet exhibits at art galleries, museums, and libraries for more than 50 years. Alan’s vast collection was recently permanently housed at the Northwest Puppet Center in Seattle, and is under the care of Dimitria Carter, a second generation puppeteer whose family has worked other puppetry experts from around the world. It was tough for Alan to part with his puppets but he knew it was time to get a permanent home for them.

Alan Cook: A Puppet Collector’s Odyssey” may be purchased by sending $37.50 plus $5 for shipping to IPM Books, C/O Jackee Marks, 702 The Strand. Hermosa Beach, Ca. Include shipping and email addresses.

Alan will be performing a brief “Three Billy Goat’s  Gruff” in the South Pasadena Public Library Community Room on Friday, November 30 at 7 p.m. He will precede actor, writer, and director Duffy Hudson who will be showcasing his new one-man show about the action aboard the airliner, United Flight 93 that was hijacked by terrorists and aimed for the Capitol Building in Washington DC on September 11, 2001, shortly after two planes crashed into the World Trade Center.  Duffy Hudson has previously performed Living History events at the Library as Poe,  Einstein,  Houdini, and others to standing ovations. The free event is presented by the South Pasadena Public Library, the Friends of the South Pasadena Public Library, and the Living History Centre Fund.  The Library Community Room is located at 1115 El Centro Street.  Admission is free of charge and doors will open at 6:30 p.m.