It’s hard to believe but South Pasadena High School drama has not put on a spring musical since “Legally Blonde” in 2019, so it’s no surprise that they are eagerly anticipating next weekend’s premiere of “SHREK The Musical”, April 22 & 23 at 7pm and April 24 at 2pm. For anyone unfamiliar, “Shrek The Musical” is the Tony Award-winning, fairytale adventure based on the Dreamworks animated film that follows a grumpy, green, solitary ogre as his quiet life is upended when a displaced bunch of fairytale characters from Pinocchio to The Three Little Pigs, the Gingerbread Man and more end up banished to “his” swamp by the ill-tempered Lord Farquaad. With the help of a wise-cracking donkey, Shrek accepts a deal to save his swamp by rescuing Princess Fiona for Farquaad. Hilarity, surprises and a whole lot of fun ensue!

“This is a year where the only thing I really wanted to do, for the rehearsal process and the show, I just wanted to laugh,” director Nick Hoffa tells us emphatically. “I wanted to have so much fun and Shrek, in addition to being really funny, has great music, great ensemble pieces, so it can involve a ton of students in a really great way – but mostly I wanted something that was going to be really fun. That said, it’s not a show that doesn’t have important messages – actually deeply important ones about acceptance of all kinds of people and looking beneath the surface.”

Hoffa explains that Shrek plays on the idea of fairytale characters, and that what our expectations of what fairytale characters are is maybe not who they are – and the idea that if you deviate from the norm, you are banished. “Shrek is ultimately about looking below the surface and understanding that everyone’s independent quirks are to be celebrated and enjoyed whether you’re an ogre or pinocchio or whomever – you are odd and different and that’s wonderful. It’s a celebration of the uniqueness of each person in a very moving, celebratory way.”

Hoffa describes the spring musical as “hanging on for dear life because there are so many moving pieces and other teachers involved from Howard Crawford (who will conduct the orchestra), Courtney Cheyne (choreography), to James Jontz (technical director) and our new vocal teacher Wilder Reinman. Shrek has a bit of an improvised quality to it so we’ve embraced some of those moments of playfulness which the students have brought. I have extreme faith in this group of actors – it’s one of the most mature and ready groups I’ve ever had.” He pauses a moment and goes on, “I think this particular group of seniors – having made it through the pandemic, made it through filming the “Scottish Play”, doing Sense and Sensibility outside – they’re just so ready to work. They have been amazing – into it from the beginning, they’ve worked so hard, they’ve put in a lot of time and energy. The great addition that this group has brought is their total level of commitment to the show. I think they’re really excited to put on a show for the community. We have a responsibility to all the kids whose shows got cancelled, who weren’t able to do shows last year, to put on a great show.”

Rena Pau, who plays the Wicked Witch among other roles says she’s loving the choreography that Ms. Cheyne is doing saying, “since no one’s really human, all the movements are so different, all the choreography is so different – there are a lot of moments where we get to freestyle as our characters so that makes it so individual to all of us and it’s really fun to put your own twist onto the choreography. And we’re just so excited to be back inside the theatre with the lights, the mics, the sound, and being able to be backstage and experiencing the show from the wings – I’m so excited to experience it again after such a long period and Shrek is such a fun show to be a part of – I’m so ready for that full theatre feel again.”

Lulu Talesnick-Lopez has the physically challenging role of the “bad guy” Lord Farquaad. He is vertically challenged and you’ll need to come see the show to see exactly how she pulls that off. “It’s the most demanding role I’ve ever done,” says Talesnick-Lopez, “I am singing, acting and dancing in this (altered) way, so it’s been kind of a hard adjustment but it’s also really funny and really sells the character, so I’ve been enjoying it. And my costume has had a very interesting journey – it’s very “Frankensteined” together” she says with a laugh, “Miss Nielsen has been working on fixing it and making sure it works. Half the battle has been navigating the costume!”

It’s the first time for many of the actors to do a full blown comedy that also has a lot of physical comedy. “This is out of my comfort zone,” says Talesnick-Lopez, “this is a big character – even the character backstory is very silly and outrageous so it’s been really fun having to be funny and outrageous in everything I do. Farquaad is very… “extra”!” She says she’s really excited to see how all the fairytale creatures come together, “in Shrek there’s so many fairytales combined so I can’t wait to see everyone in their costumes and see their scenes and I’m super excited to sing Farquaad’s country ballad!”

Little wooden boy Pinocchio, whose nose grows when he tells lies, is played by Franny Knight who says playing the role is “very fun but much more challenging than I thought it would be because his songs are all sung very high, in this funky voice, which I thought would be easy but vocally it’s hard. I also have the nose that extends which makes it hard to breathe!” She quickly adds, “but it’s been so much fun – all the fairytale creatures are so fun and really talented.” She goes on to talk about the physical demands explaining “we had a unit in our drama class on comedia where we did very physical comedy and I feel that got us ready for this.” This is the first musical at the high school for Knight and she says “I’m just so excited to finally get to do it and I think everyone is really excited. I think Mr. Hoffa made a really good choice with Shrek because it’s so fun and we just need a fun musical after the terrible couple of years we’ve had. I’ve been acting with the same people for the past five years so this is our last hurrah and this is genuinely a very talented cast.”

This is also the first musical at SPHS for Quinn Manzo who plays Princess Fiona, which she says of course is bittersweet. “Doing it was definitely the right decision and I’m excited I get to mark the end of my high school experience this way, especially with this group of people that I’ve grown to love so much.” She says that going into rehearsals she had made certain assumptions about the show – “that it was silly, comedic, it’s all fairytale characters so we already know them and with my character, I made a snap judgement that she was a classic ingénue – but she’s really strong and even though they make light of it, living in isolation her whole life and being told the one key to finding a happy life is finding that one person – it’s a tough set up and you set yourself up to this impossible standard. The more time that I spent trying to figure out more about her, I realized that all of these characters have depth to them and even though they’re “silly fairtytales” they did endure some pretty difficult things if they were translated into real life.” As to what audiences can expect Manzo says, “Shrek sets itself apart from other, what we think of as classic musicals, with grooves and jazz and funk – you can dance to it! And I think the audience will be surprised by the underlying messages, especially the larger, transformative message of loving and accepting yourself as you are.”

Playing the eponymous ogre is Levi Srebalus who says, “this is the coolest one yet. It’s also nerve-wracking and sad because I’m going to miss the way we do shows here but at the same time, it’s the best one yet. I get to be with all my seniors I’ve been with for four years and more underclassmen – and all of them are just so cool too – and we get to tell this story. We’re ready and feel excited about it and we’re proud of ourselves. We’re really tight knit and I’m trying to not take for granted every rehearsal and enjoy every moment.” He says playing the role has shown him why children love Shrek and look up to him, “no matter what people say, he’s still himself and he has his life that he loves and he’s not afraid of what anyone thinks. But then he discovers love, friends, family and I think him realizing the importance of that is an important part of the message of the story. He’s heroic and he has empathy and kindness in his heart but he’s so misunderstood.  It’s fun to play because he looks nothing like a human yet he has the most human qualities ever. That’s a cool thing to experience.” He’s excited to share the story with the community and says, “you know the final number is “I’m a Believer” and it fits well, like Mr. Hoffa says, to come out of this pandemic and believe that we can indeed do live theatre again, we’re going to do it and it’s going to be great. It’s a special show.”

Ava Paige echoes that sentiment, “the cast is so funny – every person here is hilarious. Every scene is hilarious – the whole show is so funny!” After dipping her toe into comedy for the first time playing Marian Dashwood in Sense and Sensibility this fall, she says “I guess Mr. Hoffa must have liked it because he cast me as Donkey and it’s been difficult because sometimes I just don’t know! I don’t particularly have skills in this area but I’m working on it and it’s been a great learning process for my senior year. Sometimes I don’t quite get how to deliver the jokes and Mr. Hoffa gives me inspiration.” She’s been in every show since the musical her freshman year and says “Mr. Hoffa is my favorite person on campus. He speaks to you like a person rather than a student – his classes are a great learning environment, it’s a physical class, you’re acting and it’s really hands on education – not only are you learning how to act but you learn about yourself. I’ve had so much fun in his classes and doing all these productions,” and she adds wistfully, “it’s going to be sad to leave.”

This week will see the cast getting in full costume and getting on the big stage in the main auditorium with lighting, sound and full orchestra. So grab your favorite theatre pal for this joyful noise of Shrek The Musical, live on stage at South Pasadena High School. (The cast uses masks during rehearsals to ensure everyone’s safety and will be Covid tested before the show. Masks will not be worn during the show.) Performances are Friday April 22 & Saturday April 23 at 7pm and Sunday April 24 at 2pm. Tickets and info at SouthPasDrama.com 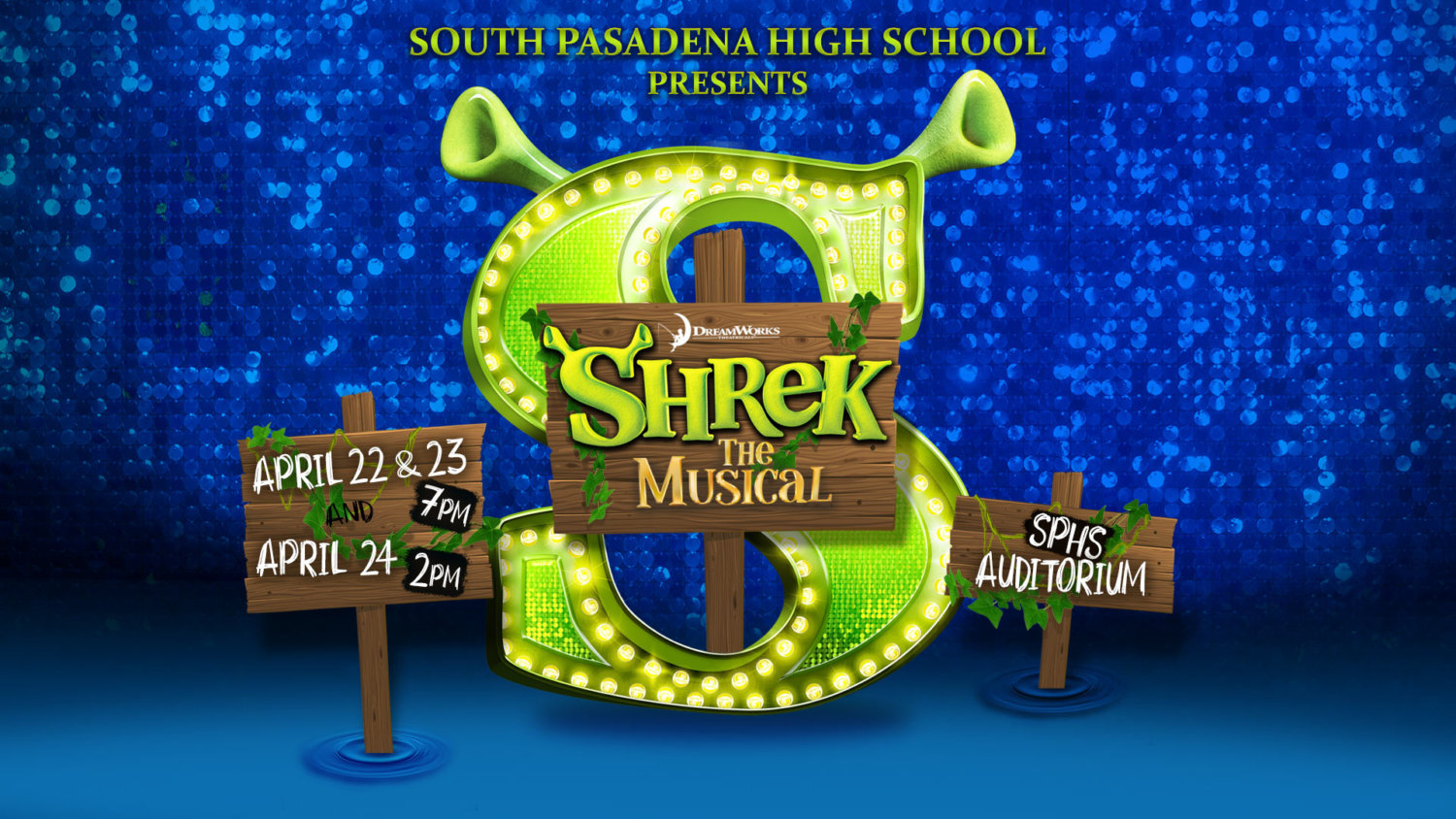