Ned Colletti, will discuss his just released bestseller, “The Big Chair: The Smooth Hops and Bad Bounces from the Inside World of the Acclaimed Los Angeles Dodgers General Manager” for an Author Night on Monday, November 27 at 7 p.m., Mr. Colletti is currently Senior Adviser to the President of the  Dodgers, Andrew Friedman, and an on-screen analyst for postgame shows on SportsNetLA. Ned was general manager of the Dodgers from 2006 through 2014. In that capacity, he was responsible for overseeing the team’s entire baseball operations, including all scouting, player personnel and player development. Ned will be in conversation with Houston (not an Astros fan) Mitchell, a topnotch LA Times sportswriter who authors the popular “Dodgers’ Dugout” online newsletter. 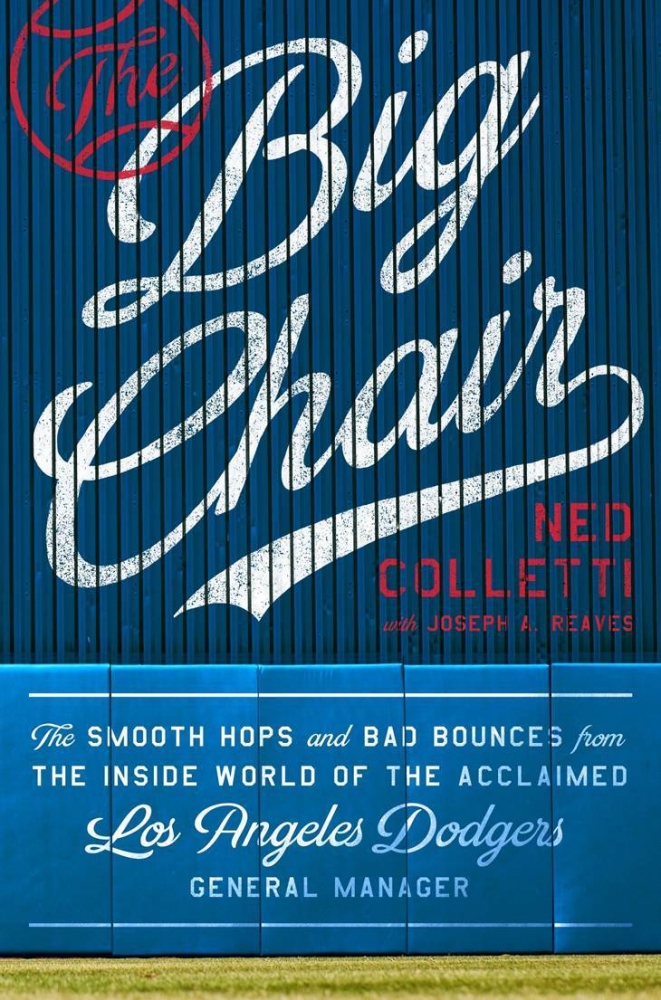 Ned Colletti is one of the great American baseball lifers –who surprisingly didn’t grow up with die-hard sports-oriented parents.  But as a youth in Franklin Park, Illinois, Ned grew to passionately love baseball, due in great part to the influence of his uncles, devout Chicago Cubs fans. Ned began his Major League career in the front office of the Cubs and was there for their National League East titles in 1984 and 1989.

Colletti joined the San Francisco Giants in 1994 as Director of Baseball Operations and was promoted to Assistant General Manager in October 1996. The Los Angeles Dodgers hired him as GM in 2005 and during his 9-year tenure, Colletti had the highest winning percentage of any peer in the National League.  In only a couple of hours, while working for the highly controversial Frank and Jamie McCourt, Colletti engineered the trade that many consider the best in Dodgers history: obtaining Manny Ramirez from the Boston Red Sox.. Ned also helped re-establish the Dodgers brand in Los Angeles in 2012 with the mega nine-player trade in 2012 involving Adrian Gonzalez, Josh Beckett, Carl Crawford, and Nick Punto which brought $250 million to the payroll. Ned is also responsible for acquiring then Double-A outfielder Andre Ethier, now a bringing longtime fan favorite, for the troubled but talented Milton Bradley, who quickly wore out his welcome in the Big Leagues. Regrettably, Colletti also signed former All Star Andruw Jones and pitcher Jason Schmidt, who hardly pitched at all after soon blowing out his shoulder.

During his extraordinary career, Colletti has also worked with such luminaries as Andre Dawson, Ryne Sandberg, Barry Bonds, Greg Maddux, Dennis Eckersley, Nomar Garciaparra, Joe Torre, Don Mattingly Jeff Kent, and of course, Vin Scully, Clayton Kershaw, Zack Greinke, Corey Seager, Kenley Jansen, Cody Bellinger, and Yasiel Puig. The list of greats and near greats in Colletti’s inner circle could stretch on and on, but in “The Big Chair” Ned candidly and colorfully reveals up-close observations from his behind-the-scenes encounters with them.

“The Big Chair” has been accorded 19 reviews on Amazon.com, all of them 5 Stars, the highest cumulative rating possible. It has also received rave reviews in major publications from coast to coast. None other than the Wall Street Journal has declared it “an important contribution to 21st-century baseball literature. . . Mr. Colletti’s book might be even more groundbreaking [than Moneyball] in some ways. . . [Colletti] has a gift for entertaining storytelling. . . These are stories modern general managers rarely tell…”

The free, fun event is ideal for baseball fans of all persuasions, including Dodgers fans still trying to get over the 2017 World Series Blues and those that can hardly ‘wait ‘til next year’. The free event is presented by the South Pasadena Public Library, The Friends of the South Pasadena Public Library, and Flintridge Bookstore & Coffeehouse. Special thanks to G.P. Putnam’s & Sons and 210eastsound. Autographed books will be available for purchase.

The Library Community Room is located at 1115 El Centro Street.  Admission is free of charge and doors will open at 6:30 p.m.  No tickets or reservations are necessary, but space is limited.