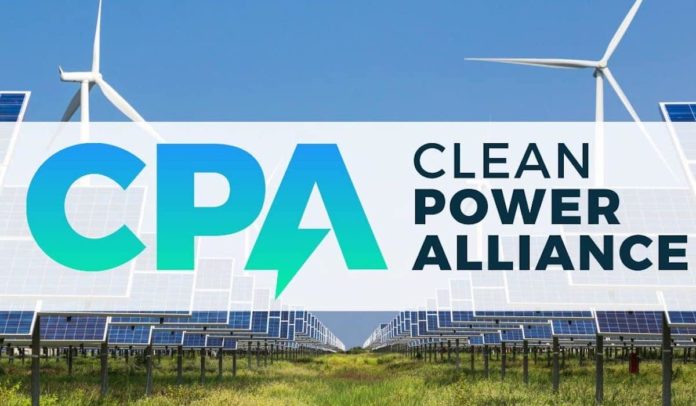 The Clean Power Alliance this month added over 300 megawatts of solar generating capacity to its growing profile of long-term renewable power resources. Directors said the community choice aggregator, the largest in the state, also “entered the big leagues” by signing an $80 million credit facility with JPMorgan Chase, albeit the world’s largest funder of fossil fuels.

The decisions were rendered September 2, 2021 by CPA’s 32-member board of directors, chaired by South Pasadena Mayor Diana Mahmud.

The bulk of the new solar capacity will come from a 15-year contract to purchase 300 MW of EDF Renewables’ Desert Quartzite Solar project, to be located two miles southwest of Blythe Airport on federal land specifically set aside for large scale solar development. It is slated to go online by the end of 2023, early enough to allow CPA to meet its share of California’s goal of generating half the state’s electric power with renewable resources by 2030. The project also includes a 150 MW lithium-ion battery storage system.

The pairing of solar and storage allows electricity produced during peak solar hours to be used later in the day, CPA and EDF said in a press release. This creates “a balance between electricity generation and demand. Energy storage can further smooth electricity prices and provide grid stability in an environmentally friendly way,” they added.

Energy from Desert Quartzite “fits perfectly within our mission to improve the lives and environment of our customers and communities,” said CPA executive director Ted Bardacke. He said solar/storage projects are “key to our continued growth and a means to further improve reliability for our millions of customers.”

Another 3 MW contract, the smallest CPA has secured to date, was authorized for the output from Radiant BMT LLC’s photovoltaic project east of Barstow in San Bernardino County. CPA described Radiant as a special purpose entity formed by “three renewable energy veterans” who were originally trying to sell the project to SCE.

The reason CPA secured such a small project is because it was procured under a required state disadvantaged community program, separate from the 2020 RFP which produced the Desert Quartzite bid, and which allocated only a small share to CPA; if CPA exceeds the threshold, it would not be qualified for reimbursement of certain costs.

Citing competitive concerns, CPA, a joint power agency composed of county and municipal governments, does not report the prices it pays under its power purchase agreements. But it said both the Desert Quartzite and Radiant project feature fixed prices without escalators. Spokesman Joe Cabral said the price for both the solar and storage components of Desert Quartzite were “very competitive compared to other projects submitted” in CPA’s 2020 request for offers, and that the solar component came in below a benchmark equal to $27/MWh.

The CPA board was told that because it got only three nibbles under the 2020 state disadvantaged community request for offers, it decided to use a 2019 benchmark to evaluate the much smaller Radiant project’s competitiveness, and that the price came in 25 percent below average for projects offered that year for similar technology. Because the contract is part of CPA’s “Disadvantaged Communities Green Tariff” program, Cabral said the state will reimburse CPA for any above-market costs associated with the contract.

In addition to pricing and various service and penalty costs, CPA redacted expected annual energy output and even portions of the contract’s force majeure and mitigation clauses.

With Desert Quartzite and Radiant, CPA has now signed 19 long-term, mostly 15-year, power purchase agreements with a total capacity of 1,904 MW, including 13 solar, two wind, two geothermal and two hydro projects. Of these, only five representing 394 MW are actually online and generating power–and the bulk of that is from the 300 MW Mohave (White Hills) Wind project in Arizona. These five projects generate about 10 percent of CPA’s load. The rest, slated to go online between Sept.15, 2021 and December 31, 2023, will serve an additional 45 percent of CPA’s current 10.77 billion kWh load. Eleven of the nineteen contracts include a total of 877MW of storage capacity.

LA County Supervisor Holly Mitchell wanted to know why only one of the projects, a 56 MW solar project, is within CPA’s two county service territory. Project location is one of the six “values” CPA considers in selecting a project, as is “workforce development.” Erik Nielson, CPA senior manager for structured contracts, said few bidders offer projects in Ventura or LA Counties, which he said is due to the limited space available, land and development costs, and local ordinances such as LA County’s undergrounding cable requirement.

Also at its Sept. 2 meeting, the board approved an $80 million line of credit with JPMorgan Chase Bank, more than doubling its expiring line of credit with River City Bank, and strengthening its liquidity, ability to issue letters of credit for power purchases and to borrow money for working capital. CPA is also authorized to use the credit to pay off the $30 million loan it got last year from member agency LA County, although CPA does not at this time intend to use it for the purpose. The loan was needed in part due to revenue shortfalls related to the pandemic.

Although the new credit facility’s 1.9 percent borrowing rate is higher than the 1.6 percent RCB charged and has much higher ancillary fees, its 26-month term is more than double the RCB deal and offers other benefits, CPA said. For example, it “will improve perception of CPA’s financial strength by market participants, thereby lower[ing] energy costs.” It will also help CPA as it “seeks to get its own investment grade credit rating.” JP Morgan is one of only three banks in California working with community choice aggregators, of which CPA is the largest.

Although the board supported the new credit line, there was concern because, as Culver City director Daniel Lee put it, “Chase does have a particularly horrible reputation when it come to funding climate change and the fossil fuel industry.” He wanted to know if there are “other options that could be considered down the line.”

CPA CFO David McNeil said as the largest community choice aggregator (CCA) in the state, CPA needs a lender “who understands our business.” There is a “fairly long learning curve” for banks working with the CCA model. He did not think it prudent to go outside the small circle of CCA-friendly banks for the industry’s largest credit line.

“This is a huge leap forward,” said CPA Finance Committee Chair Julian Gold of Beverly Hills. “The fact that JP Morgan, despite its record on the climate, has a huge reputation as it relates to credit agencies in general” is important. “If we can get an organization like them to have faith in us, [it] is huge. It launches us into the big league.”

Three other directors also expressed concern about JPMorgan Chases’ fossil fuel investments. It was agreed that CPA would send the bank a communication indicating the members’ dissatisfaction with its investments. “We want to be consistent in what we are looking to achieve in the energy sources we are move away from,” said West Hollywood director Lindsey Horvath, who noted that her city has adopted a policy about with whom it banks and that CPA should consider a similar approach.

“It is contradictory for us to give them our business while they undermine” CPA’s mission, added Simi Valley director Ruth Luevanos. She abstained from the otherwise unanimous vote to approve the deal.