A South Pasadenan for over 30 years, Vance Sanders is known to many as a coach, father, volunteer, comedian and all around nice guy. He came to South Pasadena in the late 70’s, after graduating from University of Oklahoma in Advertisting, to get his Advertising Design degree from The ArtCenter College of Design in Pasadena.

Sanders had always been one to tell jokes and make people laugh so at some point he landed at The Groundlings taking improv classes. While he enjoyed improv, he says the whole group thing was always such a hassle; when to get together, where to rehearse, who can make it, who’s going to do what etc. that he ended up striking out on his own doing stand-up and going to open mic nights. Sanders says, “with stand up, it’s just me and my thoughts. I can say whatever I want to say, I don’t have to get anyone’s approval. To me it was just more intimate and more immediate.” He goes on to say “all improvers get frustrated and do stand-up and all stand-ups get frustrated and try improv. So I took a class and the graduation show was at the Ice House in Pasadena and that’s how I started doing stand-up at the Ice House, which I did for years.”

After graduating from ArtCenter, Sanders worked as an art director for very “fancypants” advertising firms through the years, but stand-up was always a part of his life and probably kept him sane. As far as his stand-up life goes, he says “I didn’t even start until I was 33 which is when most people quit!” Supporting and cheering him on since ’94 is his lovely wife, Heidi, who you will often see at his shows. Sanders says they still have close and dear friends from those early days of Heidi running lights for him in tiny, little “caves” of comedy. Through the years he’s hosted open mics at The Improv, The Ice House and Peterson’s Coffee Shop among others in Los Angeles.

Recently Sanders organized a group of stand-up comedian friends to do comedy shows on Wednesday nights at The Barkley in South Pasadena. It’s called Bark. It starts at 8pm and features 7 comics doing about 8-10 minutes of comedy. Zach Galifianakis did Bark a couple of months ago. Galifianakis had done shows at Peterson’s back before he was a huge star and, like most comedians, he likes to come back and do stand-up when he can. Sanders invited him and Galifianakis said he was free and could do it. So he showed up with his shy friend in a baseball cap (it was Jon Hamm) and Sanders says he killed.

The Barkley is located at 1400 Huntington Drive at the corner of Huntington and Fremont in South Pasadena. The Bark happens every Wednesday at 8pm. No cover charge, no drink minimum. 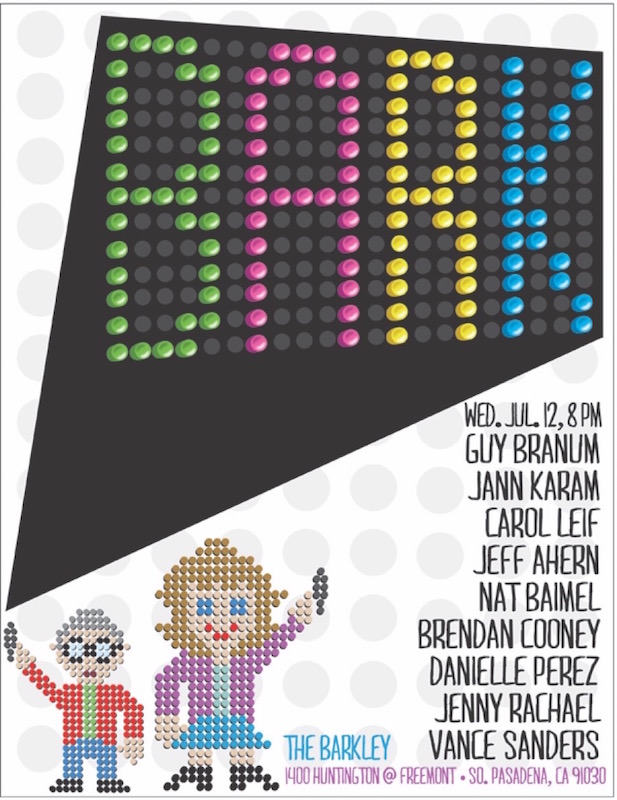