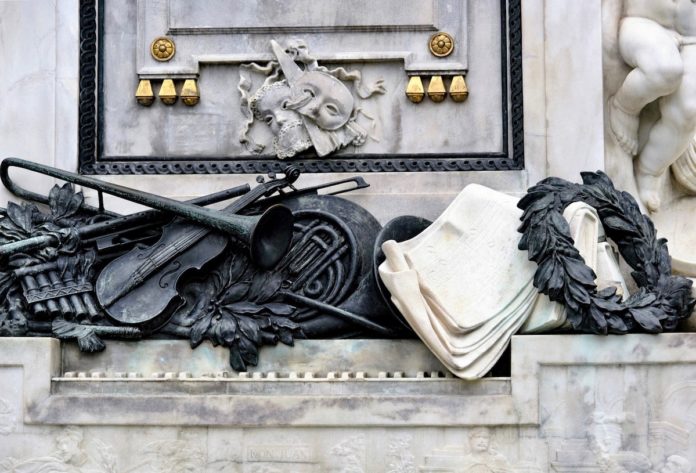 In 1984, while attending college, I went to see the movie Amadeus. I wrote a poem about the scene after Mozart died. He was only 35 years old. I submitted the piece to a national poetry competition and won first prize.

On September 13, 2011, I took my youngest daughter Maia to see the LA Phil performance of Mozart’s Requiem Mass in D minor (K.626) at the Hollywood Bowl. When she was little, the best part about going to concerts was running back to the car – we raced, weaving in and out of people. She has an extremely competitive nature and would trip me if I was about to pass, or come to an abrupt stop knowing I would fly over her. I’m in my sixties now, so I trip her.

Photo ops at the end of music recitals are a ridiculous ritual. The parent gallery of Tiger Moms and Eagle Dads obsessively take pictures of their stressed out kids immediately following performances of “dead composers” works from the 1700s and early 1800s. Their children are only allowed to play classical music (predominantly male European composers), and must choose piano, violin, or cello (rarely flute or clarinet) – all other instruments are forbidden.

Classical music training is used by some parents to instill discipline in their children and build their “resume” for college entrance. Otherwise, listening to a variety of music is viewed as a distraction, in particular, rock music which is a punishable offense (I kid you not).

My daughters’ violin and piano recitals are a blur to me. But I do recall every performance in vivid detail when they played their own compositions, and the day Lauren performed “La Bamba” singing solo while playing her violin and guitar plugged into a Marshall half stack amp.

And I remember the moment I first realized I had a rockin’ baby Mozart living under my roof. 5-year-old Maia met me at the door, screaming, “Daddy!” Her double-braided ponytails bounced all the way to the Spinet piano. She sat down and played Alice Cooper’s “Steven.” The previous night Maia and I listened to the entire Welcome to My Nightmare album on vinyl.

“I hear’d it,” she replied, pointing to her head with a goofy ear-to-ear smile.

That’s when I realized she could play the piano by ear. Maia’s piano teacher told us that she also had perfect relative pitch. And then, the most amazing thing happened: our little one began playing original pieces.

Maia graduated from the USC Thornton School of Music during the pandemic and is now a professional music composer. Her music is played to audiences worldwide. Her piano octet “Synapse” premiered in Tokyo last fall, alongside world premieres by Japanese composer Joe Hisaishi (Spirited Away, My Neighbor Totoro) and American composer Phillip Glass. She is the first woman and youngest winner of Joe Hisaishi presents: MUSIC FUTURE international competition for composers.

My eldest daughter, Loren Las Salas (Lauren Thomas), plays violin, guitar, and bass for the Oakland-based band Day Ghost. She is also doing a progressive release of her album, called SOLITUDES, a solo project composed of three elements: violin (electric and acoustic), synthesizer, and studio hardware. The series of experimental music explores identity and “the solitudes,” a transcendent state of hermitage in the modern-day. The compositions use sound as a passage, weaving through abstractions of memory, spatial play, and summoned visions.

Please give it a listen: www.loren-salas.com/work/music

Are you all-in as a parent or a hopeful bystander eager to take credit for your child’s success when they figure out how to be successful on their own?

I always believed in my daughters. I enjoyed their learning process as well, so my encouragement was genuine. How many parents can say they liked the sound of a “honking” saxophone or “squeaky” violin when their child plays their musical instrument for the first time?

How important is your upwardly mobile lifestyle? Do you need to upgrade your home every 7-10 years and replace your automobiles every 3-5 years? How much are you willing to risk to assure your children have the tools they need to succeed? Their ultimate success may require pushing all your chips to the middle while gambling on their future.

You hope you can keep the house, but you’re willing to risk everything.

When Maia was accepted to the USC Thornton School of Music as a music composition major with a minor in film, my wife and I were prepared to sell our loft to pay over $70,000 a year for tuition, books, and housing. Fortunately, USC gave Maia close to a free ride. Whew, that was a close one!

It Takes a Team

Seven-time F1 champion Lewis Hamilton and Tiger Woods both had dedicated fathers who helped advance their careers at an early age. Mozart was a gifted musician and composer who also had a supportive father at a young age. Coaches, teammates, trainers, teachers, counselors, friends and family, and former champions willing to reveal their secrets – the list is endless. Nobody excels at anything on their own. Success requires a network of likeminded role models and facilitators to create a team of dedicated, talented, and hard-working human architects for “genius” to flourish.

So let’s never again mention the word genius because there is no easy method to give children a leg up on everyone else. Again, listening to Mozart CDs for babies is ridiculous. Better to play all kinds of music and get their hands and mouth on musical instruments at an early age. Lauren liked classic rock as a child and now enjoys Bay Area punk rock bands and Bluegrass Junction on Sirius XM radio. Maia’s first favorite listening music was the box set “With the Lights Out” by Nirvana – not Classical KUSC on the radio.

Next week – Raising Baby Mozart (Part 3). More about raising musical prodigies and some unconventional parental magic to help keep them engaged and balanced.