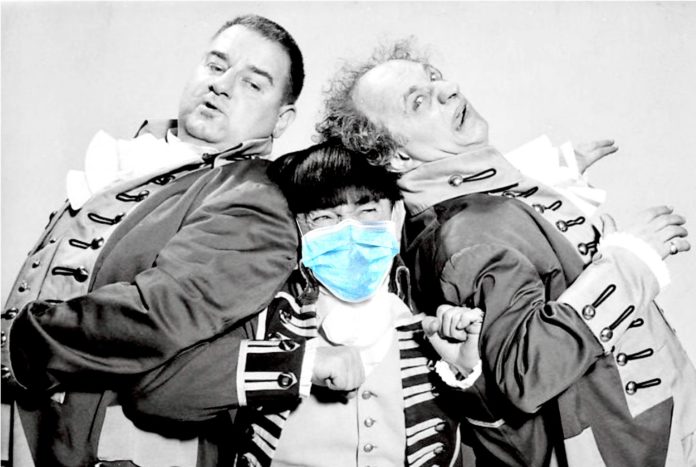 Our hardship, at the moment, feels like forever. It’s been two months since the state’s closure orders, and many of us have had enough.

When the economy was humming three months ago, the United States enjoyed a record expansion and the lowest unemployment in a half-century. What felt like an economic paradise in February now feels like cabin fever in May. Perhaps we’ll soon be eating our own like the Donner Party in June. That’s not funny.

Why is the government so eager to flip the switch back “on”? Two words: death and taxes.

They’re a wacky bunch. Political stooges who saw their poll numbers rise, but just couldn’t get out of their own way. People love their laughable contradictions and howl at their political party’s madcap posturing. Preaching comedy daily and teaching slapstick by the hour, they are “Moe” Trump (United States President), “Curly” Gavin (California Governor), and “Larry” Garcetti (Los Angeles Mayor).

The smartest stooge is rarely seen. “Shemp” Biden is in hiding, hoping to steal the election when nobody cares anymore.

Moe Trump abandoned daily press conference when his approval rating declined. Curly Gavin sounds intelligent but is a political pragmatist who easily caves to protestors’ demands. Larry Garcetti conducts his news conferences like he’s giving a eulogy for the end times. I imagine we are in the Zombie Apocalypse every time he speaks.

Power to the people! Hey, but aren’t we in a pandemic?

In a time of vacuous leadership, the mask-less marauders who stormed our beaches to bake in the sun and shoot the curls just a week ago, have been granted enormous political favor.

After scattered protests sprung up on a Friday, in less than 72 hours, on a Monday, the California governor proclaimed that the “data shows” the state is entering Stage Two of his pandemic recovery plan. He hastily announced that businesses and beaches could open if they follow unspecified safety requirements.

The number of confirmed coronavirus cases is continuing to rise. The death rate has not as yet fallen. And there is no vaccine.

But senior citizens with health conditions generally don’t fill the streets carrying signs or set police cruisers on fire. Politicians don’t have to contend with their images on the evening news draped over their walkers begging for their lives.

For the fearful lawmakers and gutless leaders all seeking reelection and pining for higher office, I raise my bottle of Corona. For the city, state, and federal employee unions who refuse to take a volunteer reduction in pay while hiding behind the cloak of “essential public services.” For the California governor, who demands three trillion dollars from the federal government to maintain his bloated state payroll during a pandemic. You certainly earned your lime!

The Price of Going Back: More Death and Higher Taxes

Despite the governor’s claim, THERE IS NO SIGNIFICANT CHANGE IN “THE DATA.” It’s fair to say that state officials have already decided there is an acceptable level of death. And they know what that number is.

Federal and state officials have grown tired of defending the vulnerable. Their numbers are relatively small compared to the all-important workforce (income tax), businesses (corporate and business tax), homeowners (property tax), consumer purchases (sales tax), additional government programs (bond measures and gas tax), etc. Whew! One revenue source for the state, at least, is on the rise: the death tax.

The price of human mobility is more than 30,000 deaths every year on U.S. roadways. Over four million people are injured in auto accidents severely enough to require medical attention. Likewise, the governor’s Stage Two recovery will require adopting an acceptable level of death in order to get the economy back on track, while using smoke and mirrors to achieve a “balanced budget” (required by law).

Today, Curly Gavin explained he plans to rob surplus tax revenue (California residents being overtaxed) first. Whatever budget money he can’t plug holes with, in the end, he hopes will be coming from U.S. taxpayers. Curly insists the federal government should pay rather than ask the state’s “untouchables” (those who benefit from the steady flow of state tax revenue) to share some of the burden. Their voter loyalty is coveted in California – it helps to maintain one-party supermajorities in both houses, Assembly and Senate, and all major offices of the executive branch.

California residents pay the highest taxes and fees in the country. Our state enjoyed a 21 billion dollar surplus before the spread of COVID-19. We have the world’s fifth-largest economy among nations. Maybe the justification for more tax money is also detailed in Stage Two of the governor’s recovery plan – in print too small for seniors to read.

Curly Gavin is the most amusing of the three stooges.