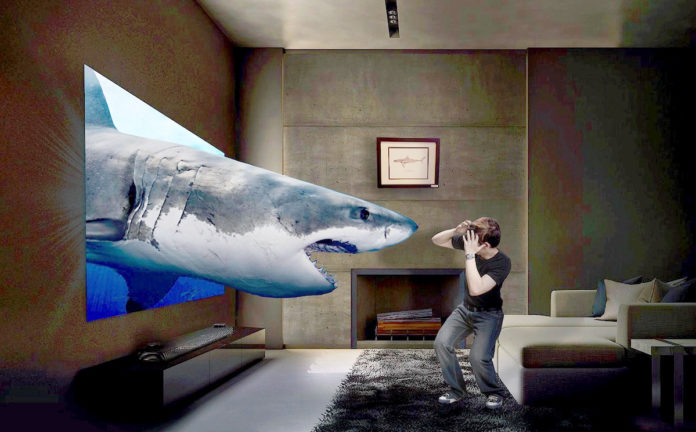 A workmate once told me that office management wants us at our desks plugged into the Corporate Matrix. “Cubicles are like squares in a giant waffle iron,” she added. “We exist in a griddle of work stations, then Mr. Smith closes the lid and turns up the heat.”

Interesting analogy, but I don’t see it this way. I believe employees and their cubicles are like dinghies adrift in the high seas of American capitalism. Employees are responsible for their survival. Those who achieve career longevity find safe harbor from the most efficient killer in the office: the boss shark.

“We’ve missed you!” bellows the boss shark with a sawtooth smile. “The pandemic will be over soon, and you know what that means. No more social distancing from me!”

Office sharks are coldblooded. They thrive in high-pressure encounters with upper management and glide effortlessly in greywater office politics. They are high in decision-making skills and low in empathy.

And the best part: boss sharks are known to kill their own.

Everyone in the office is one of these: killer whale, whale, shark, dolphin, or goldfish.

Goldfish are most employees. They are plentiful, contained, easily edible, and agreeably digestible.

Dolphins are the players. They grab hold of the shark’s fin and surf in the wake of the killer whale.

Sharks (“the boss”) are the office managers. Sharks “manage by walking around,” moving through the office as a whale moves through krill.

Whales are near the top of the food chain. Too big to eat. They are the boss’s boss and their offspring.

Killer Whales are badass. They reside in the bottomless cavern known as the HR Department. HR has taken over control of most large corporations – weighing in on hiring and firing, promotions, and discipline matters. It’s amusing to see them make the boss shark do the Monty Python’s Flying Circus Fish Slapping Dance.

Sharks are most dangerous when they are exposed and alone. Showing signs of weakness may trigger a feeding frenzy. Therefore, I became a dolphin. I was playful and manipulative when I needed to be, but never scheming or overly sneaky. I despise the Machiavellian big-fish wannabes. I especially liked ramming my bottlenose into their butt without kissing it. There is a difference, albeit a subtle one. The boss shark derives pleasure in both.

6 Tips for Surviving Shark Attacks in The Office

After arriving on shore to begin your corporate career, you stand up in your cubicle and cast your view across the ocean of office cubicles. That’s when the boss shark taps you on the shoulder, smiling, “Welcome to the deep, I mean, the office.” Its razor-sharp teeth exposed for the first time.

Swimming with the sharks (without becoming their meal) requires a crafty skillset. I survived 30 years in the “shark tank” office and retired at age 56. The following tips will make you a dolphin and help you reach your island paradise (early retirement).

No. 1 Cheerful Compliance. Boss sharks love to feel they have inspired “the troops.” Listen attentively and nod your head agreeably whenever boss shark issues marching orders during an all-hands meeting (also known as a “Come to Jesus Meeting”). They feel like a rock star when the office goldfish and dolphins act like roadies and adoring fans.

No. 2 Your Idea Is Their Idea. If you want to make a difference and get something done in a hurry, “there is always my way,” says the voice of Paul Frees at Disneyland’s Haunted Mansion ride. The walls slowly stretch, and a skeleton appears hanging from the skylight, illuminated by a flash of lightning—my way, meaning the boss shark’s path. The trick is to get him or her to believe your idea is their idea. If done correctly, you’ll hear the high score ring of the pinball machine JAWS. The business world has a name for this low-risk survival technique. It’s called: managing up.

No. 3 Agree to Agree. The popular belief is that everyone in the office – no matter their position – is encouraged to express themselves (work-related thoughts and ideas are respected and valued). The office is supposed to be a safe and forgiving environment. Well, that’s a bunch of happy horsefish poo.

There are some rules in the office-politics playbook that deserve higher-level scrutiny – this is one of them. My advice is this: Don’t ever believe it’s okay to speak your mind freely if it contradicts the shark’s agenda. “Everyone is a winner,” “We all work together as a team,” and “There are no wrong answers while brainstorming” – these sentiments are shark lies. They are rarely practiced in the office and are typically given lip service at offsite team-building meetings. Remember, this is a game of survival in a sea of shark-infested cubicles. It’s not about speaking freely to hear yourself think while torching your career as others sit on their fins and silently cheer you on with nodding heads and bubbling lips.

No. 4 Remain Loyal and Positive. Business professionals know it is best to remain positive and above the fray, especially while their co-workers suck ass and trash talk the boss shark in the same breath. You, on the other hand, bleed loyalty from every pore. At corporate headquarters, we called it “bleeding blue.” Blue is the color of Honda’s automobile division H logo. Corporate blood is the only kind that does not receive a kill response from office sharks.

No. 5 Beware of the New Boss Shark. First-time boss sharks may appear to be cold-blooded, but some of them have the heart of a hipster. They like sharing stories about their vinyl record collection, insisting that George Harrison is the reason for the Beatles’ meteoric success. So, you want to talk up muscle cars, vintage motorcycles, and hats. Why hats? Most companies have carved out the workforce fat, adopting a lean staff profile that requires employees to wear many hats to get the job done. Hipsters dig hats.

Hipster sharks may have knowingly signed up for the Cubicle Nation Tour of Duty but still, believe that Corporate America is stealing their soul. We all do. Please make no mistake about it. Sharks are sharks. Never be fooled by an office shark wearing a cool hat on their lunch break. They may openly decry the lack of personal freedom, claiming to favor higher wages, a four-day workweek, and working from home, yet pine for a nostalgia-inspired workplace with the same look and feel as the T.V. series Mad Men.

No 6 Think and Act in Your Team’s Best Interest. The BS artists, backstabbers, and slackers are the frothy, splintered muck that washes on shore after a shipwreck. Some of it is bound to stick on you like a toxic oil spill. When it does, it will rinse right off because you will have the unwavering support of your boss shark and the respect of your team of dolphins and goldfish. They always have your back. Why? Because you are like them. An artful survivor with a genuine caring heart. A real people person.

We all know the quote: “Keep your friends close, and your enemies closer.” There is a variation I like better by Lyndon Johnson, speaking of his political enemies: “Better to have them inside the tent pissin’ out than outside pissin’ in.” Still, both sentiments are flawed. I agree with Ziad K. Abdelnour in his book Economic Warfare: Secrets of Wealth Creation in the Age of Welfare Politics, “Kill your enemies with success and bury them with a smile.” That never fails.

Very few boss sharks have the skill to enhance the value of the organization. They fail to see the bigger picture and lack the ability to transform the business if they did. Their inability to change the corporate culture weighs heavy on their shoulders. Boss sharks often feel they swim alone. So, they surround themselves with others who are hardworking and loyal—people they can trust. People like me.

Yes, I played the game. I survived the persistent onslaught of office mudslinging and mind-numbing meetings. I did it willingly – not for me – I did it for my team. Longevity in a career requires that you care about someone outside of yourself. That “someone” for me is my family (at home) and my team (at work).

One last piece of advice

Never bleed in the office. Boss sharks can sense a drop of blood from 4 km (2.5 miles) away. If you get a paper cut, wrap your hand tightly around your finger and make a fist. Get up from your desk slowly. Don’t make any sudden moves. Inch your way to the exit. Then burst through the door and run as if your life depends on it. Because it does.