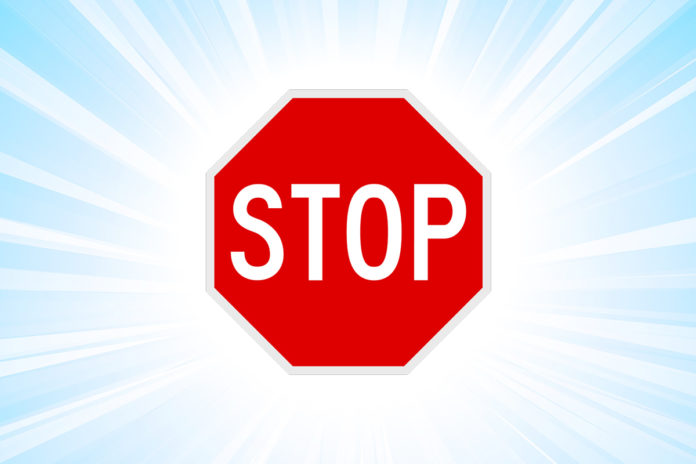 Audience applause broke out when the South Pasadena City Council voted unanimously Wednesday evening to install stop signs at the three-way intersection of Meridian Ave. and Oak St. The seemingly minor action was the culmination of an emotional, two-decade long struggle by a large group of frustrated neighbors. It was taken at the behest of a muted and hard-won recommendation from Public Works staff, and against both the advice of two engineering studies and opposition from respected local experts who constitute the majority on the city’s Mobility, Transportation and Infrastructure Commission (MTIC).

Installation of the stop signs could take place in a matter of weeks. The Council also authorized crosswalk improvements at the controversial intersection.

One hundred thirty-three people signed the most recent petition from Save Meridian Avenue for its Residents Together (SMART) Families, which also wants stop signs several blocks south at Meridian’s intersection with Maple St. About a half dozen supporters testified live and eight others filed written comments.

“I am thrilled that our neighbors, including residents who live elsewhere in the city, spoke with one voice last night on the importance of installing all-way stop signs at Meridian/Oak,” SMART’s Delaine Shane wrote in a statement. “The new City Manager and the entire City Council listened and did the right thing by their unanimous decision. Kudos to MTIC Chair Larry Abelson, former City Manager Sean Joyce, and former City Council Member Stephen Rossi for helping us along the way. It took over 20 years, but the residents will now have an opportunity to walk across Meridian/Oak while the traffic stops. It’s a huge relief and a longtime coming.”

“I don’t like going against commission recommendations,” Mayor Diana Mahmud said before the vote, “but I do think there are some unique circumstances” here, particularly the sight line for turns involving Oak, which joins Meridian at a nearly 45-degree angle—and the proximity of several schools, a large church. Commenters repeatedly warned the Council that absent action, it is “only a matter of time” before a pedestrian, cyclist or driver is severely injured or killed.

Mahmud also apologized that “it has taken Council so long to get to this. The wheels of government, as you know, sometimes turn very, very slowly.”

More recently, the city commissioned W.G. Zimmerman Engineering to look at the matter. In a May 6, 2020 engineering report, it concluded the intersection did not meet the state’s traffic volume, crash data and speed criteria for a stop sign, according to a staff report. Concerned the study’s traffic data was impacted by pandemic, the Council commissioned a peer review of the study by Interwest Consulting Group which “validated” its findings, the staff report said.

Former Interim City Manager Sean Joyce then commissioned a second peer review by Rock E. Miller & Associates which identified alternative criteria in the state manual–such as high turning volumes and the timing of gaps in opposing traffic–that can be employed for stop sign analysis. Miller concluded conditions such high left turning volume, sight distance, crosswalks and pedestrian volumes justified all-way stops along Meridian not only at Oak, but Maple and Pine as well.

“Based upon the unique intersection geometrics, the marked crosswalk, and the street usage further to the east,” Miller wrote, “there is ample justification to conclude that all-way stops are appropriate for this location.”

In its written report, Public Works staff recommended installation at Oak and sought Council direction about Maple and Pine. Public Works Director Shahid Abbas, who stop sign advocates have charged with having given short shrift to their views–such as by omitting from a staff report last year MTIC’s recommendation that the Oak Street stop sign issue be reevaluated–made a remote oral presentation but did not mention the staff’s written recommendation.

Council Member and MTIC liaison Jon Primuth, whose motion brought the matter before the Council, said that at an MTIC meeting, “There was a robust technical debate over whether the studies that were done justified an all-way stop at Meridian and Oak.” He said the state manual includes hard data justifications but also has a section of “less specific, more intangible kinds of criteria.” Moreover, the intersection’s peak hours experience “significant pedestrian crossing” as well as a drive time commute. In those periods, there is volume, conflict, “and that left turn problem.” On top of all this, he said as a driver, one develops “a gut for what would be appropriate here” and concluded “you absolutely need a stop sign.”

The street could also use some design improvements, but the Council mostly deferred those considerations, such as a street widening, to longer term work scheduled for consideration under the broader Complete Street program the city has already charted for Meridian and other major city thoroughfares.

John Fisher, a retired assistant general manager for the LA City Department of Transportation who serves on the MTIC and spoke against the decision, told the Council he wanted “to express frustration that we can get locked into the emotion” of the situation.

Fisher said that while Miller is a well-known traffic consultant whom he has known for 40 years, the report was “unusual” in its format and approach and that it underplayed Meridian’s service as a “collector” street as opposed to a “local” street. He questioned whether Miller visited the intersection and whether the staff report accurately rendered Miller’s conclusions.

Fisher believes MTIC “did not have any objective data to recommend all-way stop control.” He told the South Pasadenan News he wished Public Works staff had “collected the data so we could have a solid reason” for making such decisions throughout the city.

Before the Council, he advocated instead for a “rectangular rapid flashing beacon” (RRFB) that would have more “credibility” with drivers than a stop sign requiring them to stop “each and every time when the vast majority of the time there is no conflict [with traffic from Oak].” He predicted “everyone will be frustrated because the stop sign will not work as intended.”

Fisher also disputed the notion that the city unreasonably used different criteria when it approved a stop sign at Milan and Oak but emphasized, there must be a “strong basis” for making such decisions in other parts of the city where there may be public pressure for signs, signals or speed changes. “We have to use a consistent justification. I’m all for being creative and looking at other factors, but we need to measure those factors.” He said all the “intangibles” raised in the discussion, such as the number of schools nearby and sight angles, “can be measured.”

“I know [Fisher] was talking about the emotion” supporters bring to the question, SMART Families’ Sally Takeda told the Council. “But think about when my children are crossing that street, when I am crossing the street, and there are cars that are literally driving faster to get ahead of me. Children in their strollers, almost about to get hit. So is there emotion? Yes, there is emotion. How could you think any other way?”

She implored the Council to vote for the stop sign. “You could be superheroes for us today!”

As the applause settled down after the vote, Mayor Mahmud joked, “We’re getting our capes ready.”