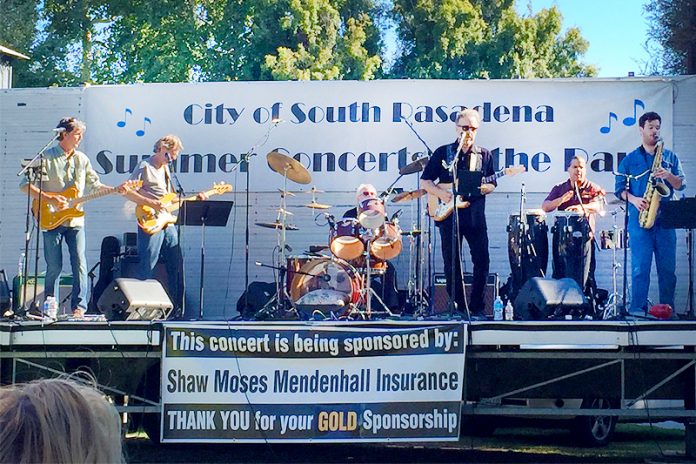 If you’ve lived in South Pasadena for a number of years, then chances are you know The Grateful Dads. But perhaps some of the newer families haven’t had the pleasure of hearing these guys rock a smooth Curtis Mayfield tune, harmonize on a Tom Petty classic or witness them getting everyone dancing to Prince or The Jackson 5. And even many old school South Pas folks may not know the real back story of how it all began. Rather innocently as it turns out.

In May of 1999, Lisa Cavalier was the PTA president at Arroyo Vista Elementary. The school was having a ribbon cutting ceremony for their newly built, two-story building on campus and Cavalier wanted a band to play. She went straight to David Plenn, known to most as owner of The Dinosaur Farm and ‘honorary Mayor’, and said, “I know you used to play music for a living. Patty’s husband played drums and he has a friend whose son is going here who plays guitar.” Plenn says “Lisa put us together and at one point Mike Downing was supposed to sing a Jimmy Buffet song but ended up being called away on police work, so it ended up being myself on lead guitar and vocals, Joe Davis on rhythm guitar and vocals, Steve Fritz on bass/vocals & originally Wink Winkle on drums.”  Winkle was eventually, a la Spinal Tap, replaced by Peter Milio (no he didn’t spontaneously combust). Plenn explains that they wanted to call them the Wildcat Dads referring to the school mascot but Plenn thought it needed to be more universal in case they played anywhere other than Arroyo Vista and he casually said, “what about The Grateful Dads?” Everyone loved it and so it was that a group of elementary school Dads became a legendary band. By they way, they don’t even play Grateful Dead songs!

The Grateful Dads were an immediate South Pas hit and people began asking them to play at their parties and events. At this time in Plenn’s life, he hadn’t been playing in a while and was focused on his toy store and family. To actually get a set list going, they started rehearsing in the old Dinosaur Farm (where Marz is now located) upstairs room and in pretty short order they had worked up enough songs to play a few sets. He remembers doing a party for Mike Thurman and then playing the Fun Fair and during one of those first gigs Plenn remembers thinking on stage, “this is why I started playing in the first place. It’s fun! I’m not paying my bills. When I started playing I didn’t think oh hey this is a great way to support a family. I just started playing and it was fun.”

Plenn was on the SPEF board and they had a country band play for one of their events that he sat in with and he thought they should have something that people could dance to. Thus began the era of The Grateful Dads tearing it up at Parti Gras for several years where they would add a killer horn section featuring Mark Hatch and Jordon Katz on trumpet and percussionists Ray Islas, Richie Garcia and Fernando Diez. In recent years, South Pasadenans have watched Plenn’s son, Taylor, jamming with the band on alto and tenor sax. I can attest that those dance floors were packed to the brim with several parents ending up in a pool one year.

Before becoming Dads, Plenn was a songwriter and guitarist, Milio was a pro drummer with Country Joe and Booker T, Fritz played with various jazz and rock bands, and Davis starred in the London production of The Buddy Holly Story. These days the Dads rehearse in the basement of the current Dinosaur Farm location among the Compsognathus and various Acrocanthosaurus as they continue to rock n’roll for the pure joy of it and play for events, private gigs and the South Pasadena Concerts in the Park.

On Sunday July 9th, from 5pm-7pm, South Pasadenans will have the pleasure of rocking out with The Grateful Dads as they kick off the Summer Concerts in the Park series in Garfield Park. Everyone is invited to bring blankets, low beach chairs, bring your own dinner or purchase dinner at the park and kick back, relax and sure, get up and dance with The Grateful Dads!