Superintendent Geoff Yantz made a surprisingly moving speech at the most recent WISPPA meeting where he spoke about the power of education, why we do what we do for our schools and highlighted the improvements made along with what’s in store for the district.  For those still getting to know Yantz, he lives in Redondo Beach with his wife and three children who are 13, 11 & 8. His wife teaches elementary school and Yantz comes from a long line of educators. “It’s a privilege to be here in South Pasadena,” says Yantz, “I’m approaching the end of my fourth year and the time has gone by so fast; it’s been so rewarding getting to know this community and watching the value it places on the education system.” He came to us from El Segundo after serving 17 years, 7 as superintendent and while he loved his time there, he was looking for a new challenge. He says through visiting other schools throughout California he knows that “our kids are extraordinary and that is a direct correlation to the value that this community places on it’s schools.”

He began with a some fun district history trivia which moved into a delightful video produced by the D.U.D.E.S with some fantastic drone footage provided by students including Henry Main. He went on to speak about the vast improvements made to the elective opportunities at all five schools which is something he was specifically asked to look at when he first arrived. Looking at the before and after charts, one could see dozens of added elective courses bolded in red such as Broadcast Journalism, Robotics, Voice, additional Drama Classes, Web Design, Biomedical Innovations, the internship program at the high school and much more.

Some Prop 39 funds have gone towards energy efficiency projects such as converting all gyms to LED lighting, all exterior lighting at the high school has been converted to LED and this January begins the project to convert all the classrooms to LED lighting, which will consume the rest of the funds. We have also upgraded to a new overlay system for our Heating, Ventilation & Air Conditioning (HVAC) across all campuses to monitor our HVAC system with SMART controllers connected to a local weather station which is proving very effective.  The HVAC and new roof at Marengo Elementary was completed this summer.

The next phase of improvements include breaking ground on the innovative new math and science building at the high school along with complete renovation of the gym,weight room, locker rooms, tennis courts, basketball courts, ADA access, bathrooms, new visitor stands, a training facility and film room for the sports teams, new stadium LED lights and new storage. The middle school gets a new soccer field, new blacktop area, new tennis, basketball courts and track as well as infrastructure for solar along with repurposing of the old gym to accommodate a black box theatre, a robotics lab and an art lab.

Beyond those projects lie more upgrades at the elementary schools as well as renovations of the middle school and high school auditoriums.

He definitely “got into the weeds” with WISPPA about specifics in terms of how the district receives funding with the bottom line being that South Pasadena lost a tremendous amount of its State funding in recent years and that the funding measures passed here in South Pasadena are absolutely vital to the continuation of these important programs and upgrades.

Yantz is a superintendent that parents see around town and at so many school functions. Recently he surprised the volunteer parents at the high school, incognito in his baseball cap, by delivering a cooler full of popcicles during the extreme heatwave.

Yantz closed the meeting by saying that while our district certainly excels in so many areas, winning accolades, prizes and honors, he says he “experienced something at the high school graduation this year which was quite moving for a lot of people and it was a different way of looking at how we are fulfilling our mission.” He went on to show an excerpt of Senior Adiana Paul’s graduation speech where she spoke about beating the odds of being an African American in the foster care system by graduating with her class and how her fellow students made the difference in her life. Yantz said, “what struck me in hearing her words was the impact that our students within our system had on this young lady. It certainly provided some healthy conversation among all of us and it provoked a great deal of thought about how it is we measure our success and our mission.” 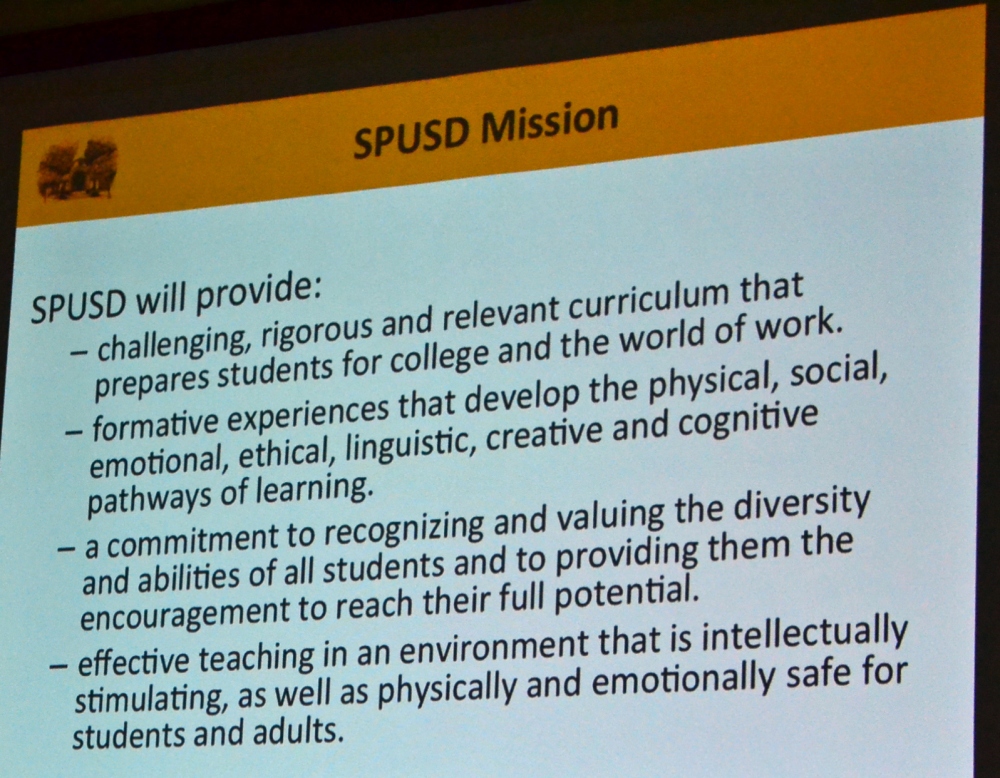 Superintendent Yantz also gave this State of the District presentation at the recent School Board meeting and High School PTSA meeting.