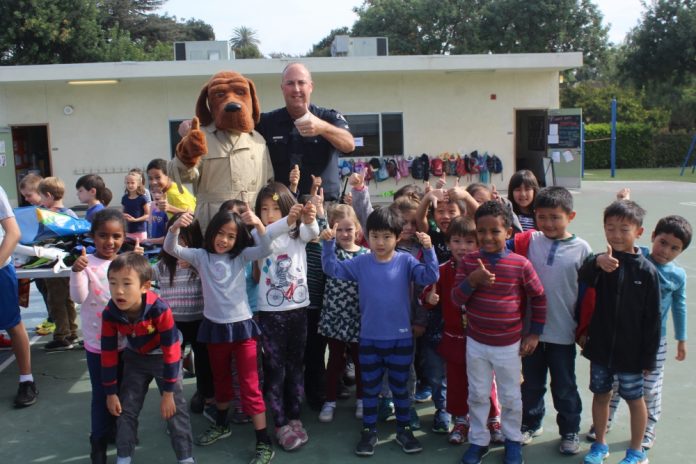 Forming an assembly line, one after another, elementary School students were on a mission Monday morning to help the homeless. Donations were received from all three elementary schools and the middle school. The students came to the Marengo campus from all four schools to work together on the project.

Walking alongside portable tables set up in the playground area on campus, the youngsters were instructed to place a variety of items into bags. In went bottled water, travel-sized toiletries, grooming supplies, hand sanitizes, snacks, socks, blankets and other useful items as the bags were being prepared for delivering to the needy in downtown Los Angeles.

The project was spearheaded by Jerome Robertson, the extended day director for the South Pasadena Unified School District and his staff, who came up with the idea about four years ago to do something kind for others. It has been a tradition ever since.

“It’s really just about giving back to the homeless and those in need,” explained Robertson, watching the kids line up and head down the assembly line, gathering the goods for the care packages. “My staff and I put our heads together, and with the support of the parents contributing all this wonderful stuff, we were able to make it happen.” Anita Whang tells us, “all our SPUSD Extended Day parents have been incredibly generous.”

During the Thanksgiving break, when students are out of school next week, Robertson will join a handful of his staff members and distribute the care packages to those living on the street. “There’s really no game plan, because the homeless are everywhere,” he said. “We kind of split up and hand off the packages to those in need.”

Robertson is simply grateful to all the families for graciously donating the items going into the bags.

“It’s important for the kids to know that they’re helping others,” said Robertson, who oversees the before and after-school programs for all three elementary schools and the middle school in the district. “I think it opens their eyes and helps them understand how blessed most of us are to have a lot of things other people don’t. They may now see someone homeless on the street and feel good that they did something to help them out.”

Helping the homeless is only one of the random acts of kindness shown by kids in Robertson’s extended day school program. Sometimes they can be found in parking lots at local supermarkets helping patrons carry bags of groceries to their cars. “The kids learn to give back and help

On hand for Monday’s event were Corporal Craig Phillips, representing the South Pasadena Police Officers Association, and McGruff the Crime Dog, who greeted the kids with high fives. Phillips said he hoped to take a few of the care packages to those living on the streets in South Pasadena.

“Even though we don’t have a large homeless population in our city, it’s nice to help them as well,” said Phillips. “We’re here to lend some support say hello and thank the students.”