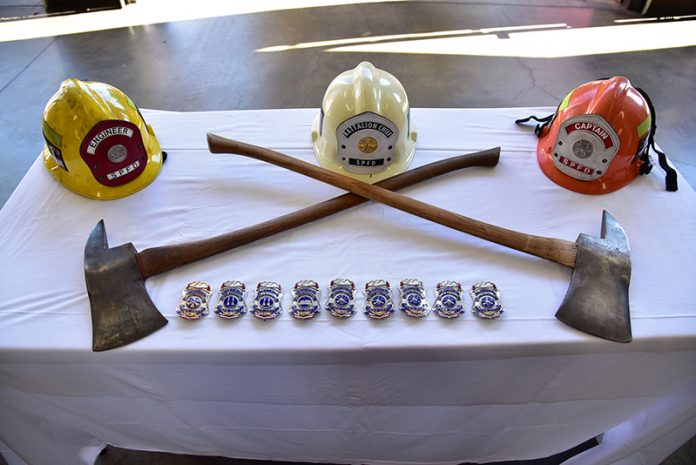 Chief Riddle opened the ceremony by welcoming and thanking everyone for coming out to support the firefighters and he acknowledged the entire City Council with Mayor Michael Cacciotti, Marina Khubesrian and Bob Joe in attendance along with City Manager Stephanie DeWolfe and representatives from South Pasadena Police Department, San Marino Fire Department and San Gabriel Fire Department.

Speaking directly to the families Riddle said “I want to address the families here today – Thank you for your sacrifices and your efforts in supporting your spouse. As a 25 year veteran and a second generation firefighter, I know the challenges that families can face when your significant other is on duty for an extended amount of time. We are truly a family and you are part of the family.”

Riddle went on to explain the sometimes tumultuous past of the department and expressed how proud he is of the department as a whole and how grateful he is for a city council that has supported the changes and goals of the department. “To give you a sense of the amount of change, I take over as the 6th Fire Chief in just over 4 years,” said Riddle. When he took over, South Pasadena had just terminated a the Three City Shared Agreement, had entered into a Two City Agreement with San Marino and found themselves down a quarter of their department in staffing. 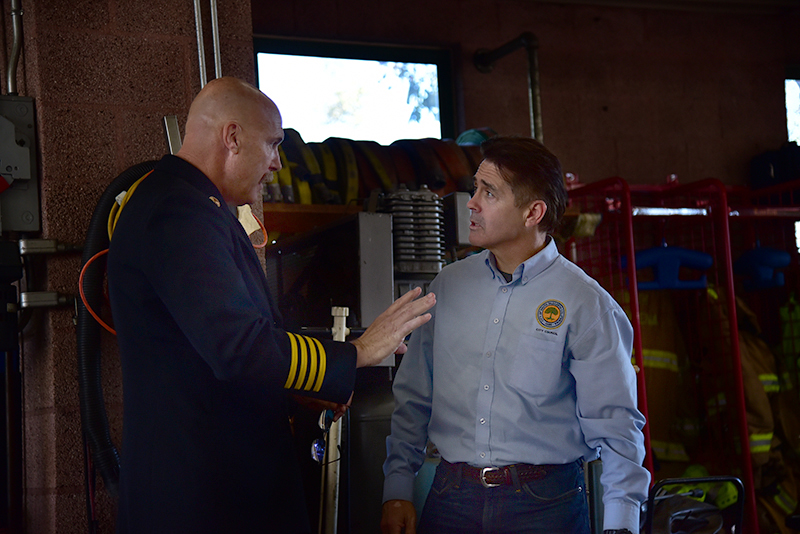 Riddle went on to say, “that amount of change and the fact we were down in staffing would be extremely distracting to any organization let alone a single station fire department where that amount of change is amplified. It can really be the catalyst for any organization to derail and detract from their mission. I am so proud of our department in that through all this change, they never wavered from our mission to provide the highest level of customer service to the citizens of South Pasadena and surrounding communities and they have conducted themselves in a manner worthy of the trust and respect afforded by this community.”

The department finds themselves close but not yet fully staffed. Their goal is to be fully staffed for the first time in seven years by early 2018. The Chief thanked the city council and especially the former, interim and current City Managers for their full support in this endeavor. Current City Manager, Stephanie DeWolfe echoed this sentiment later in the ceremony stating, “I’m very proud of the force that we have here and the city is committed to making sure that we get to full force and fill those remaining positions. Congratulations to the entire department and to the family.”

Mayor Cacciotti offered remarks saying, “today is about tradition; on March 2, 2018 will be 130 years since this city was incorporated in 1888, a tradition that started with firefighters and continues today. It’s about ceremony and recognizing official events and about family,” he went on to say, “we’re like a family and we do big things as a small city.”

Chief Riddle says the council’s support is evident from the department’s recent Gold Award from the LA County EMS Agency for patient care related to acute life threatening cardiac events and their state of the art equipment like their brand new Fire Engine.

Before commencing with the badge pinnings, Chief Riddle spoke about the future saying, “this day is special because it marks the start of a succession plan for our organization. These members being recognized today are the future of this department and as we plan for future retirements, I am proud to say that our department will be in very good hands and will be able to meet the challenges of providing all the risk fire protection to the community we serve.”

Eric Zanteson was promoted to Division Chief. Zanteson has 21 years in the fire service. He was hired in 1996 as an Auxiliary Firefighter and hired to full time in 1999. He holds a Bachelor of Science in Geography and is a Certified Fire Officer. He was promoted to Company Officer in July 2012 and has served the department as the Paramedic Coordinator for over 15 years. 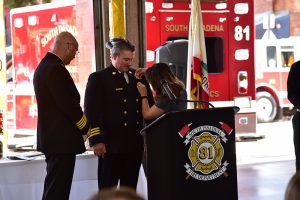 Chris Szenczi was promoted to Division Chief and was joined by his wife, Tram, and his children Tristan, Alyssa, and Christian, along with his mother, Christine. Szenczi joined the department in 1993 as an Auxiliary Firefighter and was hired to full time status in 1997. He has an Associates Science Degree in Fire Technology and is a Certified Fire Officer and Chief Officer. He has served as the department Fire Mechanic, Safety Officer, and Training Officer. 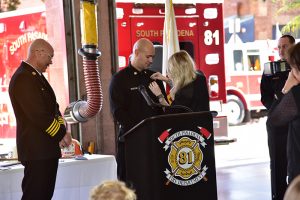 Dan Dunn was promoted to Captain and pinning his badge was his wife Laura, who was joined by their children Page and Kai and Dunn’s parents Dan and Elba. Dunn has 13 years in the Fire Service and was hired by our department in 2005 as a firefighter/paramedic from Cathedral City. Dunn holds a Company Officer Certification and was recently selected as the department’s Paramedic Coordinator. 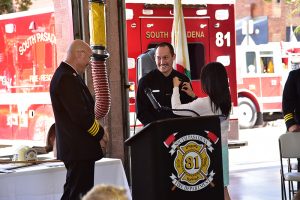 Anthony Porraz was promoted to Captain and his badge was pinned by his wife Anna, who was accompanied by their children, Noah and Anabell, and parents Linda and Ron. Porraz has ten years in the fire service and was hired by our department in 2007 as a firefighter/paramedic. Porraz holds a Company Officer Certification from the State of California and he is the department’s Fitness Coordinator. 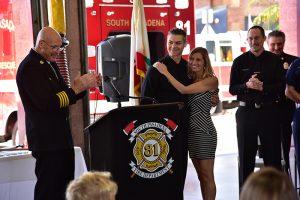 Justin Furtado was promoted to Engineer and his badge was pinned by his wife, Jennifer, and accompanied by their children, Josiah, Judah, and Jayla. Justin has eleven years in the fire service and was hired by our department in 2009 as a firefighter/paramedic. Furtado is in charge of managing all of the department’s specialty equipment and small equipment.

nthony Corrao comes to South Pasadena with six years experience as a firefighter/paramedic; four years with Apple Valley and two years with South Pasadena. Corrao was hired in December of 2015. His badge was pinned by his fiancé, Jamie. 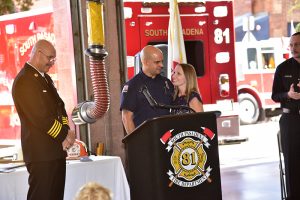 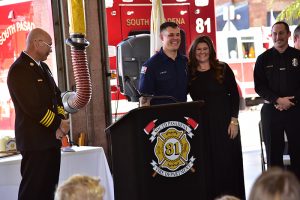 Justin Miller has nine years experience in the fire service; four years with Prince William County in Virginia and five years with Montebello. Miller is a certified Paramedic Instructor and Swift Water Rescue Instructor. Pinning his badge was his wife Tracee, joined by their son, Brodie. 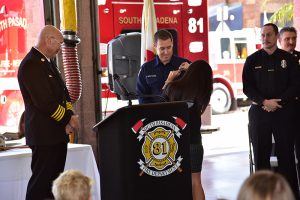 Joseph Monticone or “JC” as he is known, was joined by his fiancé, Melissa, his mother Teresa and stepfather, Ray, his father, Joe, and stepmother, Doris, and his future mother-in-law, Patty Castreda. Monticone has five years experience; two years as a firefighter/paramedic with the City of Upland and three years with La Verne as a Reserve Firefighter. His badge was pinned by his fiancé. 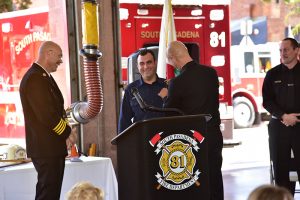 Chief Paul Riddle then led all ten men in repeating the oath and presented their wallet badges. In closing, Chief Riddle had the honor of presenting JC Monticone with a Medal of Valor. What follows are Riddle’s complete remarks. Read full story on SouthPasadenan.com 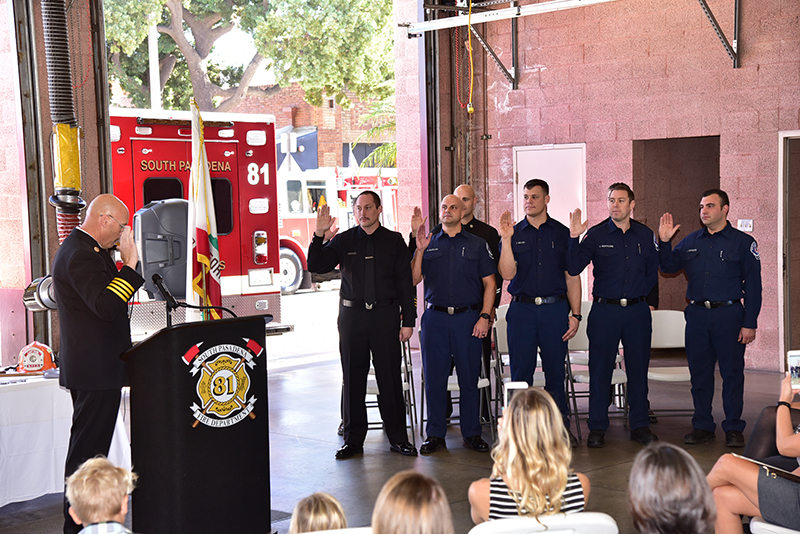 “As we close, I want to recognize the efforts of one of our firefighter/paramedics. As stated earlier, the expectations of our department are that our employees and members of our firefighter family conduct themselves in a manner worthy of respect and trust afforded us by the community we serve. These expectations apply both on and off duty. There are unique times that members of our department may find themselves in a position that requires them to go above and beyond the call of duty.

On the night of October 1, 2017, one of our members found himself in exactly that type of situation when a gunman opened fire on a crowd of 22,000 concertgoers at the Route 91 Harvest music festival on the Las Vegas Strip, leaving 58 people dead and 546 injured. 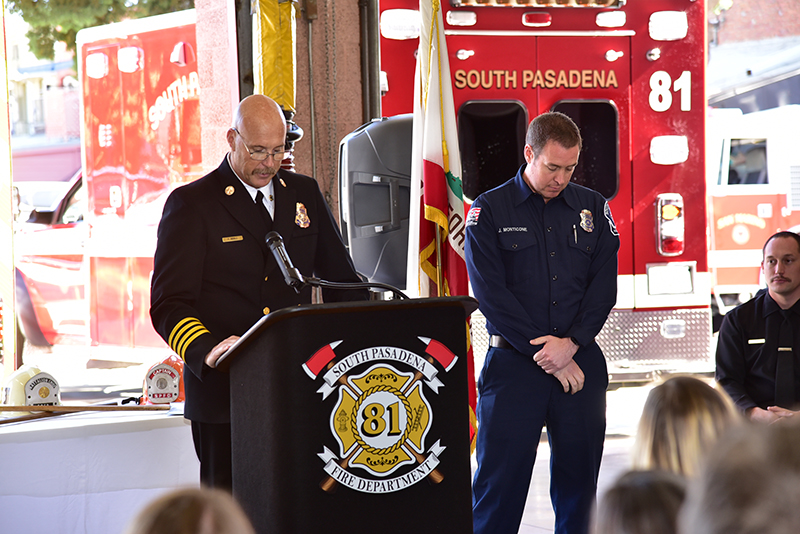 Firefighter/paramedic Joseph Monticone was at the venue with his fiancé, Melissa; they were separated and through the chaos of that horrific event, JC faced the daunting task of triaging and treating as many of the injured as he could, all the while trying to make it to his fiancé, Melissa.

There is no doubt the actions of JC potentially saved lives that night. It is with great pride that I am able to award Joseph the Medal of Valor as well as the life saving ribbon to be worn on his uniform. This award recognizes the fact that he placed the need of others above his own and this selfless act exemplifies courage and duty above and beyond.”

The crowd erupted in a long ovation which was followed by a very moving moment as Chief Riddle place the medal around Monticone’s neck. Riddle then invited Monticone’s fiancé, Melissa, to pin the Life Saving Ribbon onto his uniform. It was an emotional moment for the couple, their families and all who were in attendance. 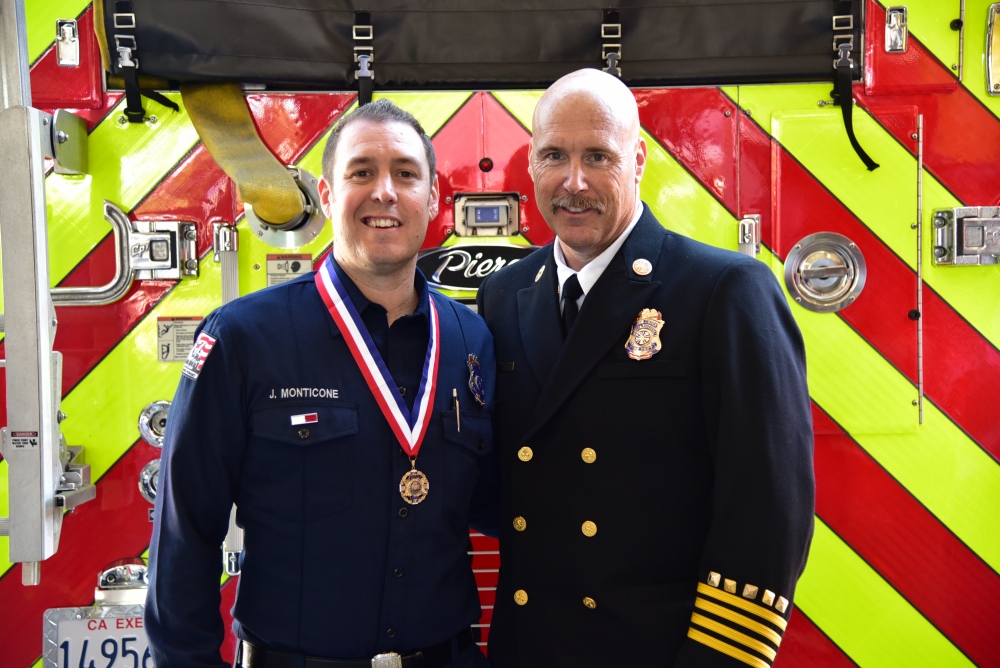 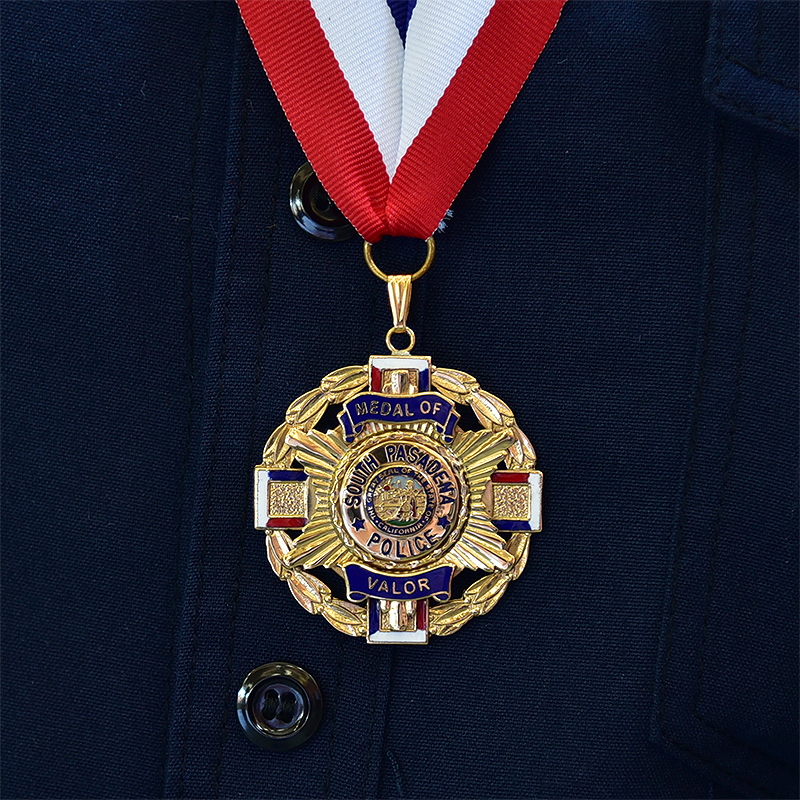 Life Without Football | Future Unknown for Athletics at SPHS