S.P.P.D. was not directly in pursuit, but assisting LAPD in search and ultimate arrest. The suspect was caught and arrested by LAPD and is now in their custody.

On Thursday evening at approximately 4pm one of our SPPD officers, while on patrol, saw an LAPD unit pursuing a suspect speeding through South Pasadena near Monterey Road and Indiana Avenue and began assisting in the pursuit. Citizens were immediately concerned due to Farmers Market going on in addition to the speed at which the suspect was driving through residential streets.

Barbra Tibbles Chabot said she was there, in her car, “he blew past us on Indiana going north, chased by police, and a few seconds later blew past us again going south up into the hills.”

LAPD had pursued the suspect from Downey and, according to South Pasadena Police Department, the suspect exited the vehicle at Gates Place and Indiana and proceeded to flee on foot. “Our officers and LAPD officers set up a perimeter around the area where he likely fled,” says Officer Spencer Louie, “LAPD used their K9s to locate the suspect hiding under a house.”

The suspect was found at a home on Martos Place where a non-life-threatening dog bite did occur and the suspect was arrested. Paramedics were on scene, treated the suspect and he was transported to a hospital. He was later released into the custody of LAPD Northeast Division.

Residents in the area were clearly unnerved, especially once the suspect was on foot as they were worried he would enter their yards or homes. Over a dozen police vehicles from LAPD and SPPD were on scene, blocking off both Monterey and Indiana. The entire episode was over by approximately 6pm.

Mickee Collins expressed gratitude that she was alerted online right away saying, “I almost got stuck in that epicenter of Monterey and Indiana.” 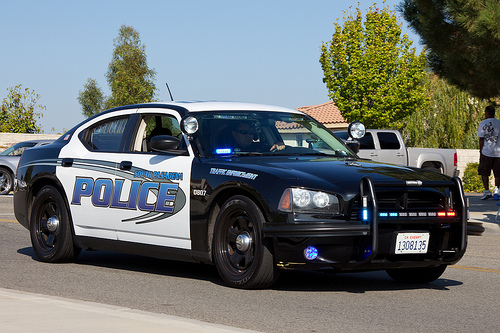