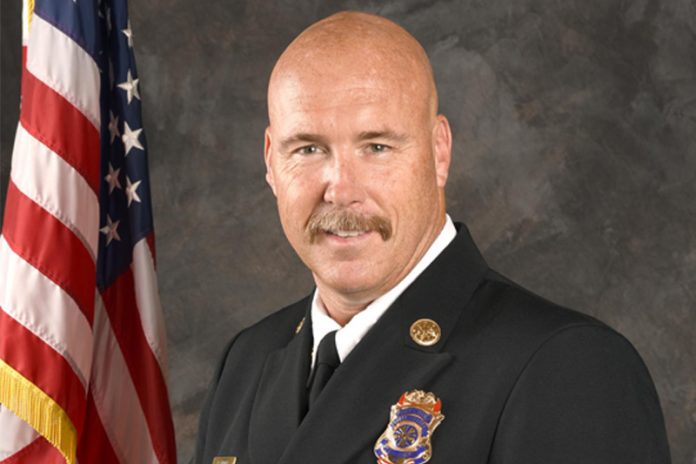 Deputy Chief Paul Riddle has been appointed as the City of South Pasadena’s Fire Chief, which makes Chief Riddle the 17th Fire Chief in the 110-year history of the Department. Riddle has served as the Deputy Fire Chief for the past three years and the humble chief says that the role is the same, just the title has changed.

Riddle’s appointment followed the City Council’s approval of a new, Two City Cooperative Fire Services Agreement with the City of San Marino. As residents will remember, South Pasadena entered into a Three City Cooperative with the cities of San Marino and San Gabriel in March of 2014. That agreement was terminated two months ago and on July 19th, City Council approved the new, Two City agreement with San Marino wherein the two cities will share the cost of a shared Command Position of a Division Chief. The agreement states that each city will maintain their own Fire Chief and Division Chief and share the cost of the shared Division Chief.

“The benefit of this new agreement is sharing the cost which saves the City of South Pasadena $47,000 annually”, explains Riddle, “and the challenge is always, when you share resources, to make sure each city is getting the service it expects. We took the successes we had with the Three City agreement and put them into the new, Two City agreement with the idea that if we were all gone in five years, would this agreement work for a whole new department? We feel this agreement does that.” He goes on to say “our number one goal is to provide the highest level of customer service that the community has come to know and expect and we think it’s a win win.”

Chief Riddle hails from West Covina, California. Having had a father who was a Firefighter for Pasadena Fire Department, Riddle has always known this area. He came to South Pasadena as a volunteer Firefighter in 1991 and was brought on as a full-time Firefighter in July of 1992. So, while the title is new, Chief Riddle has been a part of the South Pasadena community for the past 26 years. When asked about the department and South Pas itself Riddle says, “it’s a family. We spend a third of our lives here and that’s one of the advantages to being in a smaller agency; we truly are a family. And being in the community itself for twenty plus years, you get to know the citizens; you see them in the grocery store and they know you by your first name. It’s the quality of life. It’s enjoyable.”

Riddle has served South Pasadena Fire Department as an Engineer, Captain, Battalion Chief, and in 2014 was promoted to Deputy Fire Chief. As Deputy Fire Chief, he was in charge of training for the Cities of South Pasadena, San Marino, and San Gabriel Fire Departments as part of the Verdugo Cities Fire. He has also held the positions of Department Training Officer, Safety Officer, Emergency Manager, and Fitness Coordinator. He holds an associate in science degree from Mt. San Antonio College in fire technology and is completing his Bachelor’s Degree in Management.

As Fire Chief, Riddle will be responsible for leading a department composed of 21 full-time uniformed personnel, 3 part-time Fire Prevention Specialist and administrative staff.