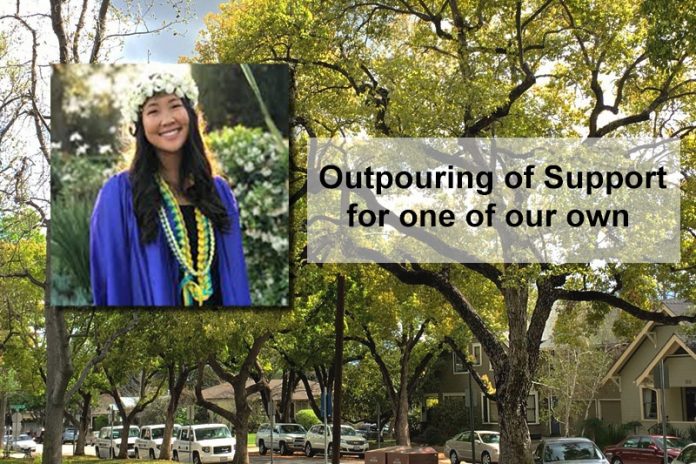 Sympathy notes are pouring in on social media and in emails following the death of South Pasadena resident Sarah Wong after a construction crane collapsed and fell Saturday afternoon from a building in Seattle before falling on a busy street below and crashing onto six vehicles.

A statement from the family of Sarah Pantip Wong:

“We want to thank the communities of Seattle, Washington, and South Pasadena and San Marino, California, and beyond for the tremendous outpouring of love and support we have received in honor of our daughter, Sarah Pantip Wong. Known by many as Sarah and by her family and many others as Pantip, we acknowledge the impact she has had on the people God has placed in her life path. As we continue to celebrate her life and mourn our loss, we are comforted by our faith, the faith communities in the Seattle and the Los Angeles areas, and Sarah Pantip’s wonderful community of friends. We understand your requests to learn more about our Pantip; however, we request privacy and are not providing interviews to the media at this time.”

Wong was among four people who died in the incident, taking place at about 3:30 p.m. as a plume of dust kicked up following the crash. Investigators say the crane was in the process of being disassembled when it fell onto the street.

Witnesses said powerful wind gusts may be a leading cause of the crane falling, but investigators say it will take some time before they fully understand the reasons behind the accident.

Two ironworkers were killed on the crane and two people died in cars below, including Wong, who was a freshman at Seattle Pacific University planning to major in nursing. Wong reportedly was riding in an Uber car with a fellow Seattle Pacific University student, who escaped without major injury, but is said to be deeply emotional and saddened by her classmate’s loss.

Wong was a student at South Pasadena High during her freshman year before transferring and graduating from Futures Academy, a private school in Pasadena.

“I’m heartbroken to hear about the untimely death of Sarah Wong, a former student at SPHS,” said South Pasadena Mayor Dr. Marina Khubesrian. “My thoughts are with the Wong family. It’s an unimaginable thing to lose a child. I can’t imagine what the Wong family must be going through.”

Stacey Petersen, the executive director for the South Pasadena Educational Foundation, remembers Wong at Marengo Elementary School as far back as kindergarten.

“My heart hurts for her family,” she said, noting her daughter, Kelcey, had several classes with Sarah throughout the years and “just the close nature of elementary school means you get to know all the kids through birthday parties, field trips, and, of course, AYSO soccer. Sarah was one of those individuals that you can’t imagine or remember without her big beautiful smile on her face.

“She was quick to smile, and as my daughter said, ‘when you were with her you always felt included, fully supported and appreciated.’ Most recently my daughter, had been on several AYSO teams with Sarah in high school. The girls had a lot of fun and Sarah was usually a big part of the silly and goofy, bringing the girls together in a positive way. When she was around there were lots of laughs while playing a sport they all loved. She was a beautiful soccer player and played a serious game but enjoyed the camaraderie of her teams as much as the sport itself.”

Expressing a thought so many hold, Petersen added: “We are heartbroken for the loss of such an incredible individual. South Pas has lost a good one.”

Posts on Facebook are numerous, resident Tom Cornwell saying: “Such a tragedy. Condolences to the Wong’s and the whole South Pas community.”

Sheila Pautsch, the city’s community services director, added: “My thoughts and prayers are with the Wong family.”

Marcos Rodriquez contributed: “So sorry that we lost one of our own. Our hearts go out to her family.”

In an email sent by Alan Ehrlich, a longtime South Pasadena resident, noted that Wong “was an accomplished gymnast, a talented ink and watercolor artist, and had a passion for musical theater, having appeared in more than six productions with Theater Experience of Southern California.”

Lauren Tan, A friend of Wong, told CBS News: “She spread so much love, encouragement and kindness to everyone around her. Most importantly, she was like my sister and one of my closet friends.”

The crane that fell had been erected for a new Google campus at Fairview Avenue and Mercer Street in a busy portion of Seattle.

Google released a statement saying, in part: “We share our deepest condolences with those who’ve been affected and thank all the first responders who quickly sprang into action.”

GLY, the general contractor at the site, also released a statement, reading, in part: “GLY and its sub contractors involved with this tower crane accident are doing everything we can to investigate the incident. We are investigating fully with investigators and assisting the local authorities. At this early stage of the investigation, we have no further details. We will share additional information as it becomes available. All inquires regarding the tower crane accident should be directed to authorities at this time.”

Parts of the crane have been removed from the top of the building and street below, and roads have been reopened following Saturday’s incident.

“We are deeply saddened to confirm that one of our students passed away in the crane accident in Seattle on April 27. Sarah Wong was in a car on Mercer Street when the crane fell. She was a freshman with an intended major in nursing and lived on campus. While we grieve the sudden and tragic loss of our precious student, we draw comfort from each other, our strong community of faith, and God’s presence with us in times of sorrow. We ask that the community join us in praying for Sarah’s family and friends during this difficult time.”

Sarah Wong is the daughter of Henry Wong and Andrea Wang, and sister of Aaron. Henry Wong is the immediate past president for the South Pasadena Kiwanis Club. “Henry and Andrea are thoughtful and kind and serve South Pasadena in a most genuine and quiet way,” said fellow Kiwanis Club member John Vandercook, who owns Reimagine Your Home, a floor and window covering business in town. “We are all praying for Henry, Andrea and their son Aaron during this sad time.”

There is a Memorial Service in Seattle for Sarah Pantip Wong Wednesday, May 1 at 7 pm at the First Free Methodist Church next to the SPU campus that will be live streamed here:
https://spu.edu/about-spu/press-room/livestreams
Plans for a service in the Los Angeles area have not been announced.