Janet Benjamin laughed at the thought, before saying to those in the crowd, “This is one of the first years in which I can say we’ve been relaxed.”

What? Those constructing and decorating South Pasadena’s entry in the 2019 Rose Parade are relaxed?

That never happens. It’s usually a race to the finish, all hands on deck in the final weeks leading up to the floral spectacle down Colorado Boulevard on New Year’s Day.

Tickets are also on sale for the annual “Crunch Time Party” on December 29. The p.m. event, including dinner, entertainment, silent and a live auction, will be held at the War Memorial Building. Call (626) 799-7813 for ticket information.  Tell them you saw it on the SouthPasadenan.com News!

Benjamin joined other members of the South Pasadena Tournament of Roses Committee Wednesday for a December “Coffee Chat,” organized by the local Chamber of Commerce. On hand were community members and business owners who got a sneak peak of the city’s float – “Three Little Birds” – just before volunteers go into the crunch time mode when finishing touches are made and thousands of flowers are installed just prior to the parade.

“We have an amazing crew,” explained Benjamin standing in front of the city float inside a giant tent erected in the parking lot of the War Memorial Building in the 400 block of Fair Oaks Avenue. “They’ve done an great job.”

Construction and decorating teams no longer work independently of each other like in years past, and now collaborate to complete the project. “It’s a team effort,” explained Benjamin, “ and makes it easier for all of us. We really work well together.”

It has worked so well that for the first time in a long time the construction crew took Thanksgiving off this year. “We’re usually working,” said Benjamin, pleased that time was granted on the holiday for relaxation, not working long hours on the float.

The city’s newest entry is based on the song “Three Little Birds,” a song made famous by Bob Marley and the Wailers back in 1977.

As the days grow closer to January 1, the stress-o-meter will go up as hundreds of volunteers contribute their time, often long into the night.

“Oh yes, it can be stressful,” explained Chris Colburn, the construction chair for the city’s float, talking about the mad dash to the finish line.

Yet, Colburn quickly pointed out, “We have a good crew and always get it done.”

Construction of the float is nearly complete and Benjamin noted that dry decorations are now being applied, soon followed by flowers as the countdown begins for final judging by Tournament of Roses officials on January 31.

In addition to thousands of roses, the South Pasadena’s float will feature orchids, gladiolas and eucalyptus bark gathered throughout the community.

The South Pasadena Tournament of Rose Association has been part of the New Year’s Day celebration since 1893, holding the high honor of being the oldest self-built float in the parade.

Benjamin told those in attendance at Wednesday’s ‘Coffee Chat’ that a group is working on the possibility of a permanent building, in place of the tent, at the War Memorial Building.

Financial support of the float, which costs roughly $100,000 annually, is needed. Every dollar raised goes directly to the purchase of steel, wood, flowers, seeds, paint and glue. Donations can be made to “SPTOR” and mailed to P.O. Box 3662, South Pasadena, CA, 91031 or online at www. SPTOR.org.

“We’re very proud of our contribution to the South Pasadena Rose Parade tradition but without your generous donation we could not get it done,” wrote Ted Shaw, the South Pasadena Tournament of Roses Association president in a letter to the community.

Tickets are also on sale for the annual “Crunch Time Party” on December 29. The p.m. event, including dinner, entertainment, silent and a live auction, will be held at the War Memorial Building. Call (626) 799-7813 for ticket information.  Tell them you saw it on the SouthPasadenan.com News. 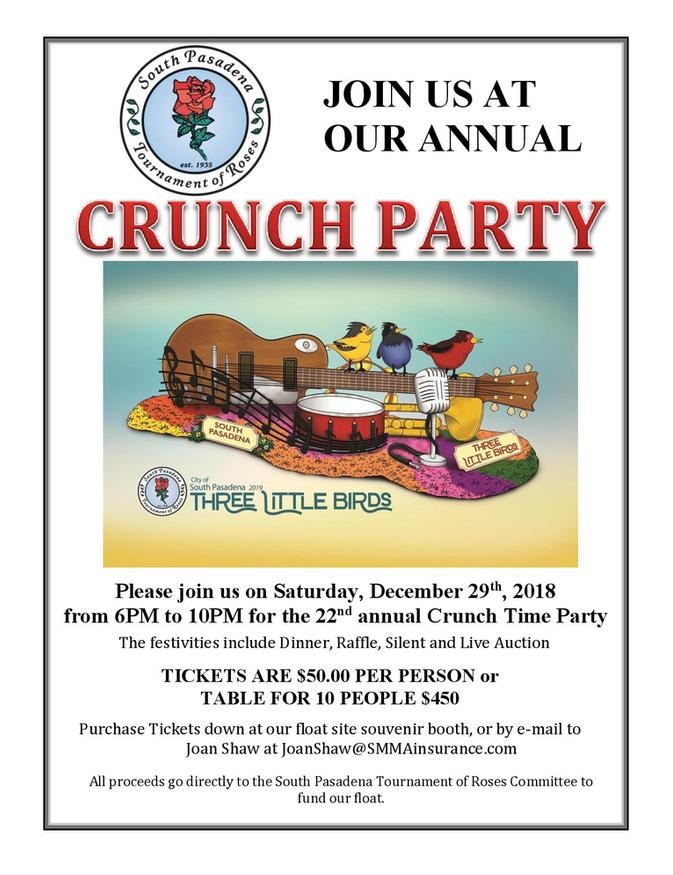