Crisis Assistance Helping Out on the Streets (CAHOOTS) is mobile crisis response team in Eugene, Oregon. They respond to mental health, substance use, and homelessness related calls for service instead of police.

Now, teams based on this model may be coming to cities in the West San Gabriel Valley. Care First South Pasadena will examine the prospects for such a program in local cities in an upcoming free webinar featuring Ben Adam Climer, former CAHOOTS Team Crisis Counselor.

The April 8 webinar comes as South Pasadena and other local cities are preparing their budgets for fiscal year 2021-22 and as municipalities across the nation are striving to reimagine public safety and eliminate needless use of police force.

In Eugene, the 30-year old CAHOOTS program costs about $2.1 million a year, but saves the city about $8.5 million annually by reducing the need for police. Social workers dispatched under the program handle about 17 percent of calls made each year to the Police Department. Based on its success, other Oregon cities have joined CAHOOTS. The program has been widely acclaimed in the media recently as a good model for enhancing public safety — from the Wall Street Journal and Atlantic magazine to The Daily Show with Trevor Noah.

Locally, Climer is working with cities in the greater Los Angeles area to form a version of the program.

Climer will explain the CAHOOTS program model at a free Care First South Pasadena webinar at 7 p.m., Thursday, April 8. To get the link for the Zoom meeting, go to www.carefirstsouthpasadena.com or e-mail carefirstsouthpas@gmail.com.

Ben Adam Climer lives and works in Pasadena. He worked for the CAHOOTS Team as a crisis counselor and EMT in Eugene and Springfield, Oregon, for five years. He founded CRISIS Consulting to help cities develop mobile crisis teams based on the CAHOOTS model.

Prior to his work as a consultant, he worked as a program manager with LA County’s Housing for Health program, and prior to working on CAHOOTS, he worked as a case manager in Pasadena and Hollywood with the organization Housing Works. Ben Adam raises two children, 6 and 4, with his wife, Selene, who is a writer and student pursuing an MFA in fiction at the University of California – Riverside. 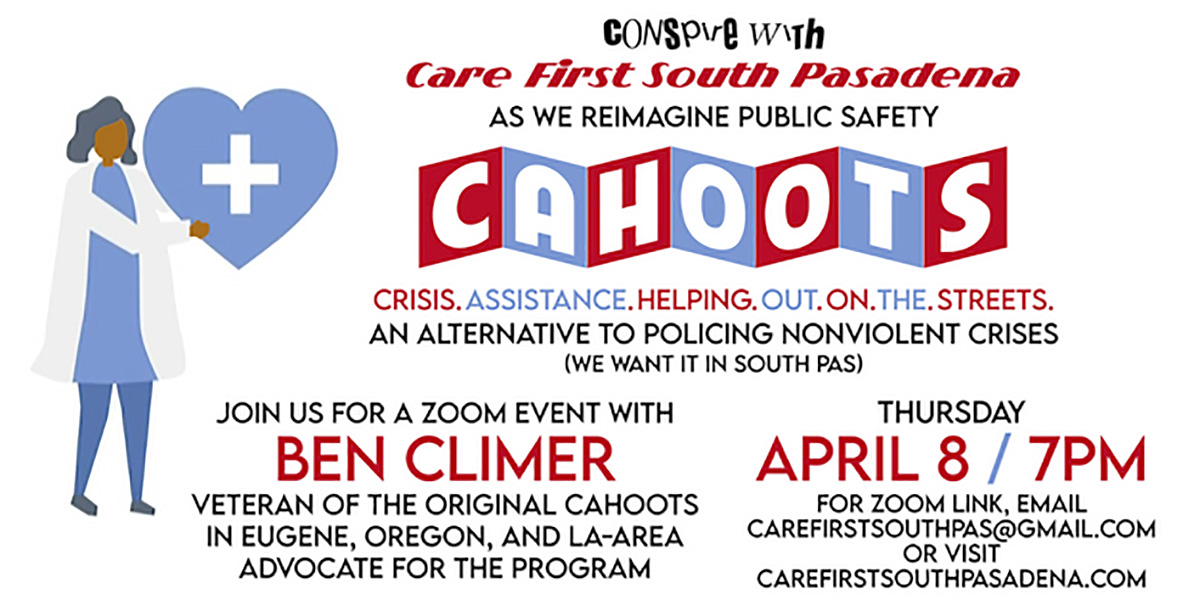