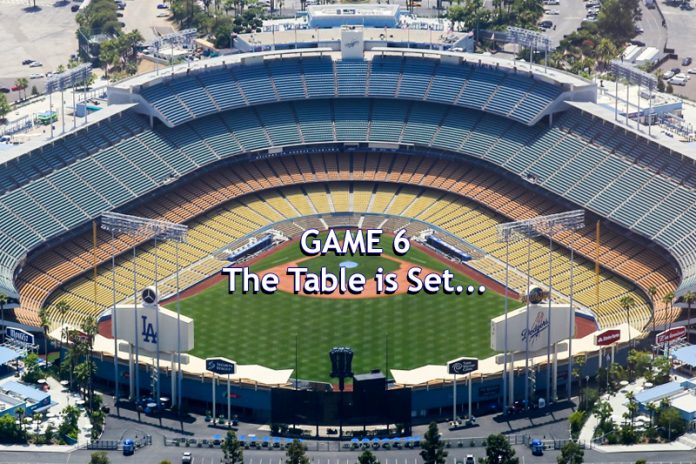 Win or lose, it has been suggested by some that both teams should take a bow following World Series play, which could end tonight, for providing an unforgettable spectacle over the past week and a half.

Anyone who’s borne witness to the spectacle on the field will attest the excitement couldn’t be any better as two evenly matched teams battle for Major League Baseball’s supremacy.

Anticipation is at its peak as the Dodgers and Astros continue to pursue the championship tonight starting at 5:20 p.m. on FOX as the Series shifts to Los Angeles for Game 6 with Houston holding a 3-2 advantage. Houston’s ace Justin Verlander will face the Dodgers’ Rich Hill in a rematch of Game 2.

The Dodgers can extend the best-of-seven series to a Game 7 with a win and look to pick up their seventh World Series championship in club history on Wednesday while Houston hopes to end it tonight and grab its first ever MLB title with a victory.

Much of the talk surrounding the high drama, tension-filled contests to date has been the ball, some jokingly saying it must be on steroids as a result of the 22 home runs hit in the first five games, already establishing a World Series record.

Fourteen different players – seven on the Astros and seven more on the Dodgers – have belted homers, which is also a record.

Houston has hit 13 homers as a team and needs only one more to tie a World Series mark set by the Angels in 2002.

Some home runs seemingly came out of nowhere as the Dodgers’ Joc Pederson broke up Justin Velander’s no-hit bid in Game 2 with his first dinger in three months. In that same game, Houston’s Marwin Gonzalez blasted a ball over the wall against Kenley Jansen when the Los Angeles closer was still being considered invincible.

In addition, Game 2 brought us five – yes, five – home runs in extra innings. The game featured a total of eight homers as the Astros defeated the Dodgers 7-6 to even the Series at one win apiece. Four homers in Game 5 either knotted the score or broke a tie.

And the beat goes on as new milestones continue to be reached.

The series has also provided some top-notch pitching from the starters, including another record – the fastest World Series contest in 25 years when Houston’s Dallas Keuchel and the Dodgers’ Clay Kershaw battled it out in 103-degree weather, yes, the hottest game played on record, in Game 1. Kershaw, fighting off the haunts of the postseason blues he’s carried with him over his career, turned in a masterful performance in the World Series opener won by the Dodgers 3-1. He threw only 83 pitches in seven innings of work and struck out 11.

Houston has had its own success. Brad Peacock dominated in Game 3 as he came in relief of starter Lance McCullers to hold Los Angeles hitless over 2 2/3 innings by striking out four and allowing only one walk. The Astros’ Charlie Morton and the Dodgers’ Alex Wood had standout performances in Game 4. Morton silenced Los Angeles bats until giving up a hit in the seventh and Wood had a no-hitter for 5 2/3 innings.

The bullpens? Not so good. The Astros carry a 7.58 ERA into tonight’s game while the Dodgers aren’t far behind with a 5.32 mark.

That might be, as many presume, due to the weirdness in the baseballs, which pitchers on both sides say are juiced, slicker and harder to throw than ever, which might be the cause for the rise in home run totals.

“The World Series ball is slicker. No doubt,” Verlander told Sports Illustrated’s Tom Verducci, who first reported the claims by players on both teams that the World Series balls are different than those used in the regular season.

Homers are occurring every 15.7 at-bats over the first five games of the series, compared to 27.1 during the regular season throughout Major League Baseball.

Oh well, it’s exciting for baseball and its fans. No team has an advantage. It’s even on both sides, so, despite the balls flying into orbit, the many comebacks, and dramatics on the field since the World Series started, let’s all take a deep breath, exhale together and be thankful for, perhaps, – what else – the best World Series on record.