It’s a moment in time Steve Fjeldsted will never forget, recalling that warm summer night about 5 1/2 years ago when a vibrant, energetic and animated Tommy Lasorda captivated the full attention of a packed house inside the South Pasadena Library Community Room with fascinating and colorful accounts of Dodger Blue.

It was there that Lasorda, whose passing last week leaves a giant hole in the organization’s family, put his spellbinding storytelling skills on full display as perhaps the best speaker in a long line of them that Steve Fjeldsted, the former South Pasadena library director now retired, brought to the building over his 13 years working for the city.

“A joke about Tommy Lasorda’s speaking appearances, was that you had to simply say hello to get him talking,” said Fjeldsted, recalling that evening back on August 6, 2015, noting what so many already knew about the former Dodger player and manager who had a “golden tongue” for his gift of gab.

From the moment Lasorda was introduced, “stories about his Hall of Fame career managing the Dodgers from 1976 to 1996 came pouring out from him one paragraph after another,” said Fjeldsted. “He reminisced of his relationships and exploits with all-time greats like Vin Scully, Orel Hershiser, Steve Garvey, Mike Piazza, and Sandy Koufax while winning two World Series titles, four National League pennants, eight division titles, and an Olympic Gold Medal.”

It was but one of more than 300 Author Night events Fjeldsted coordinated for the library during his tenure, but certainly among his favorites. “Before the event started, hundreds were lined up in Library Park (outside the library doors), far more than would fit in the venue,” he remembered. “Unfortunately, not everyone could be accommodated.”

The popularity of the event was fueled far outside South Pasadena as a result of widespread press coverage, including the latest issue of the Pasadena Weekly featuring a cover story about the appearance that showcased a large, eye-catching illustration of Lasorda by ArtCenter alumnus, Scott Gandell.

The iconic Dodgers’ manager, beaming and laughing throughout his talk, concluded the evening by signing copies of his just-released book “My Way” for a long line of admirers. Lasorda was accompanied by his co-author Colin Gunderson, who had worked alongside him for 12 years as his assistant and press coordinator. Smoothly moderating the author night was Dodgers Historian Mark Langill, a South Pasadena resident, who with his easy manner and quick-witted humor, entertained those on hand with a lively Q&A directed at the two-featured guests.

“My Way,” as described by Fjeldsted, “is a breezy book obviously titled after one of the most well-known songs of Frank Sinatra, who was a good friend of Lasorda, along with many other celebrities. It’s the kind of book that can be opened on any page to find enjoyment.”

It takes readers through Lasorda’s days as a player and the manager of the Dodgers, providing fans with insights into what made the man tick. “These included his relationship with his father, Sabatino, whom he emulated; his childhood growing up in Norristown, Pennsylvania, working odd jobs; and his unfailing work ethic,” said Fjeldsted. “That trait helped him to become one of baseball’s most successful managers as he won the World Series twice in 1981 and 1988. It also allowed him to become one of the greatest ambassadors the game has ever known.” 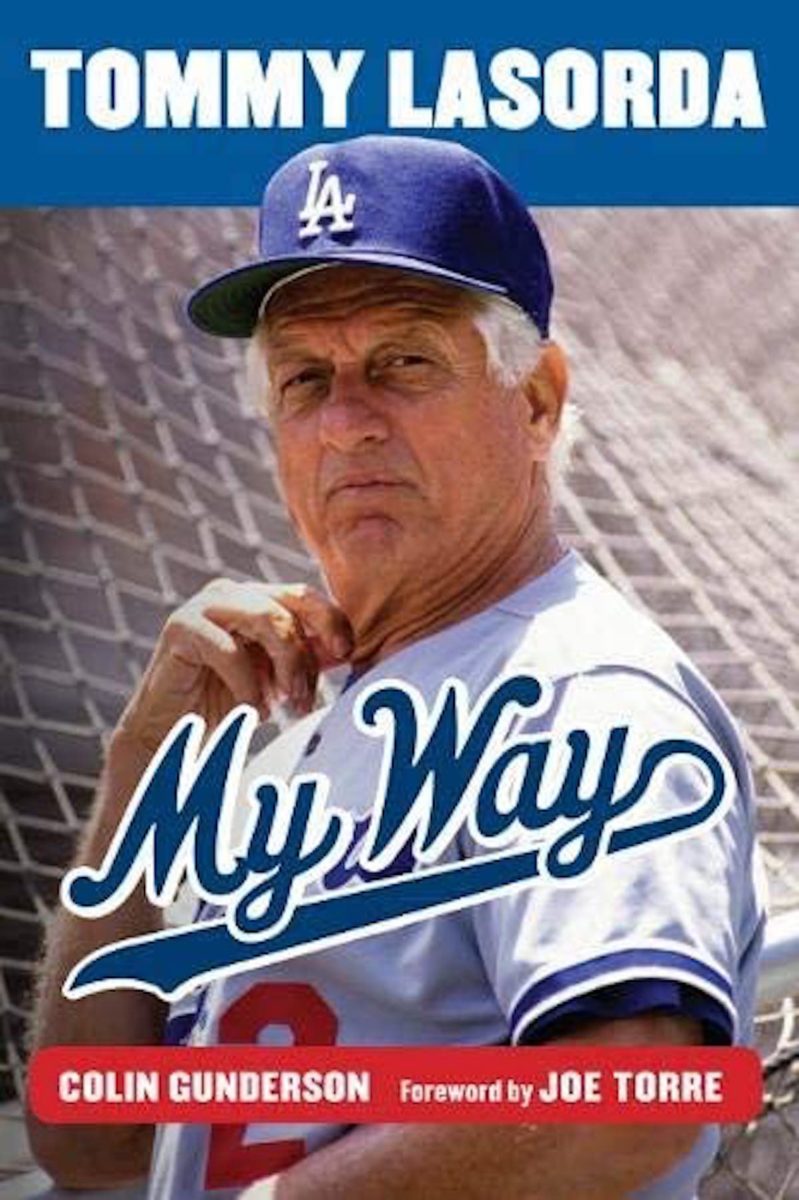 Noted Fjeldsted, each chapter bears the name of one of the virtues espoused by Lasorda: Self-confidence, Competitiveness, Patriotism, and Loyalty. Joe Torre, former Dodgers manager and the current executive vice president of baseball operations for Major League Baseball, wrote the Foreword.

“For the book, fans and players, including an impressive roster of Dodgers stars, recalled some of their favorite Lasorda anecdotes,” he said. “They also provided new information and memories from Tommy’s unique and star-studded baseball life. Some of the pranks played on Tommy by his players that are recounted are hilarious and unforgettable.”

To this day, of all the Lasorda events Langill has attended the most special was that memorable library appearance in South Pasadena. “So many times, I’ve enjoyed lunches and dinners with Tommy and Colin, whether in spring training in Florida or the executive dining room at Dodger Stadium,” explained Langill. “But it was surreal having Tommy in your hometown library and later meeting my mother, Diane, and aunt, Linda Sanday, following the program. When Tommy was introduced to my mother, he said some very nice things and I’ll never forget the look on her face. I don’t think either of us could’ve imagined such a moment. She was the one who 40 years earlier drove me to games and patiently sat in the Left Field Pavilion on Sundays while I roamed around for souvenirs and autographs. She also delivered the news after my Boy Scouts meeting at the Oneonta Church that ‘the Dodgers have a new manager,’ which was the hiring of Lasorda in late September 1976 to replace Walter Alston, who was stepping down after 23 seasons. While growing up, my aunt came through every Christmas and birthday with either a carton of Topps baseball cards or the latest baseball title from Vroman’s bookstore (in Pasadena).”

Only a couple of weeks prior to Lasorda’s stop in town, the library and Friends of the South Pasadena library had presented another sold out event – the 50th anniversary movie screening of the Beatles in “HELP!” featuring a live performance of acoustic Beatles tunes. Fjeldsted successfully marketed Lasorda’s future visit to the Beatles audience, making several announcements, saying later: “I know many folks who attended both shows.”

Another reason so many turned out for the Lasorda Author Night, claims the former library director, was because the library had already presented a large assortment of baseball film showings over the years. “Relationships had been built with the many Dodgers support organizations,” said Fjeldsted. “Their members always showed up in full force wearing blue and white jerseys and caps and sat amongst the more casual fans.”

Long before coming to the city, Fjeldsted had witnessed Lasorda speaking at the Los Angeles Times Book Festival, which featured a fundraising event for the Professional Baseball Scouts of Southern California. “So, I was certainly aware of Tommy’s dynamism and charisma,” said Fjeldsted. “And as a lifelong Dodgers fan I had heard him countless times on radio and television. It was clear that a Tommy Lasorda Author Night would be a great draw for the library and attract a large, all- ages audience for a fun time together.”

Recognizing Lasorda must have been getting a large amount of requests to pitch his book, as “My Way” had just been released, Fjeldsted soon contacted Langill, who put him in touch with Gunderson, and not long after a date was confirmed for Lasorda to include South Pasadena in his book tour.

Not surprisingly, Fjeldsted felt relief with anticipation, and excitement for what would become an unforgettable, momentous evening like few others.

“Tommy was truly charming and an incredible crowd-pleaser that night,” Fjeldsted said, looking back, smiling at the thought. “He was totally involved and supportive from start to finish. He even stayed for hours after the close of formal part of the event, talking and posing for pictures with multiple generations of longtime fans and meeting new ones. I’ll never forget it.”