Through the modern, technological age, the news came in a text message that was as powerful as any I’ve ever received.

“Our dear husband, father, son, brother, uncle, friend and champion, who was always optimistically positive in all of our endeavors and encouraged us to be the best version of ourselves, has left us. Remember him well. May he rest in peace.”

The message was sent by longtime friend Jeanne Colliau, speaking on behalf of her family members, as she sadly announced in a group text that her husband, Michael, had passed away on March 31.

I took it hard, very hard, allowing tears to flow and not holding back a screeching, “Oh no, no, no, no!”

I for one will remember Michael Colliau well, as he was always there for me, sometimes acting as a fatherly figure, even though he was younger, but more for being someone I could always count on for his intelligence, common sense, sound advice and boundless knowledge, especially when it came to the legal field. Michael was a well-respected L.A. attorney and knew the law better than most. 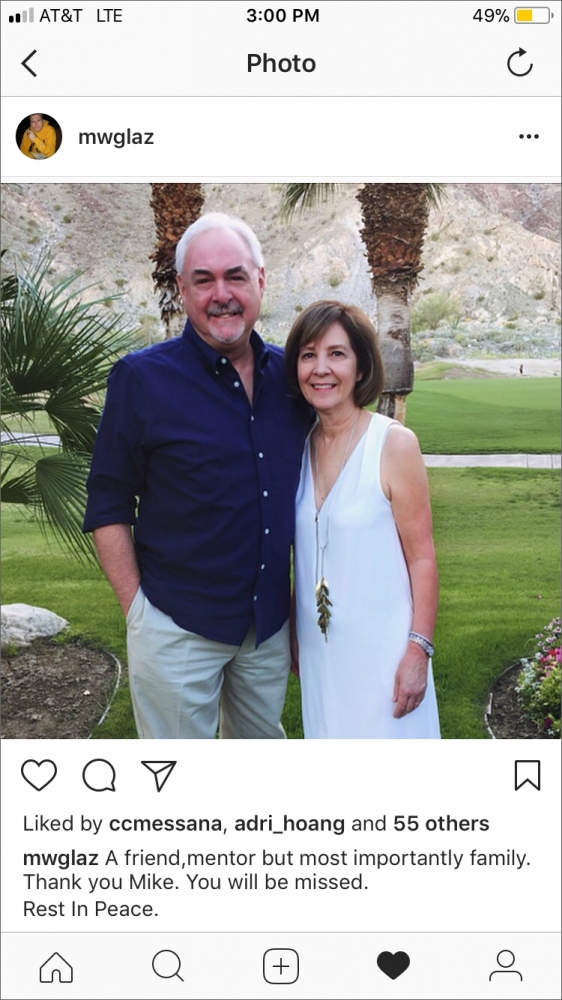 It especially came in handy when he was counted on for helping us through the legal landscape, assisting local businessman Ted Shaw and myself when the three of us purchased the South Pasadena Review in 2012 and later sold it to new ownership in 2017. Michael, who joined Jeanne in raising their two children, Steven and Taylor, in South Pasadena, wanted to ensure I had a job at the newspaper as one of the main reasons he invested in it six years ago.

“You’re like a brother, Bill, a real brother, and I want to make sure you are taken care of,” he often said to me. Words could never be any kinder and meaningful.

When our family, including my late wife, Stephanie, and Michael, now 27, and proudly doing well in the business world, moved to South Pasadena 23 years ago, the Colliau’s quickly became close friends. Jeanne and Stephanie often traded retail profession war stories, her husband and I talked sports and life in general, while our kids grew up, entertained by the wide variety of activities and athletic programs only a special small town like South Pasadena can provide.

Days numbered into weeks, weeks numbered into years, and now, looking back, the time around the Colliau’s household, always eating a hearty meal and enjoying good laughs, much of them provided in big helpings by Michael’s ability to tell a good story, will always hold the fond memories.

After hearing of his passing, I left it up to technology, reminded of the words of Michael jokingly saying, “That’s how we roll,” as I sorrowfully responded to the text of his passing: “I’m so sorry. I’m so sorry. This one really hurts. I loved that guy for his wisdom, support over the years and, mostly, for his great friendship. I’m deeply saddened at this time and love the Colliau family so much. My deepest sympathies.”

I’ll repeat Jeanne’s final words to Michael: “May he rest in peace.”