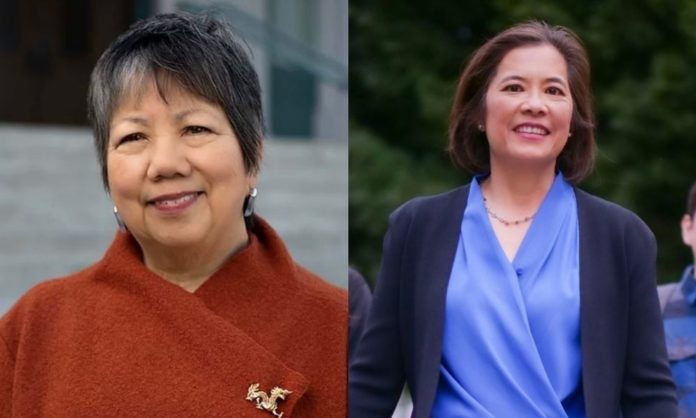 One candidate, Linda Wah, the incumbent, says she has been strongly supported by Pasadena City College students over the years.

The other, challenger Kristine Kwong, who says among the issues she wants to tackle if voted into office is to address what she calls “ineffective leadership.”

Wah hopes to retain her seat on the Pasadena City College Board of Trustees serving Area 5 – the cities of San Marino, South Pasadena and Temple City – while Kwong looks to take it away from her in the June 7 statewide direct primary election.

Both candidates are busy making the rounds, making their points, seeking to be heard.

“I have served as the PCC Trustee for Area 5 since 2010, having been appointed for a partial term and then running for two subsequent four-year terms,” said Wah when asked why she should be re-elected. “During my appointment, I was strongly supported by PCC students, as the college was embarking on a technology project and my background in technology gave me a deeper understanding of the issues at hand. Since then, I have earned the respect and support of my fellow Board members, state and local leaders, PCC’s past presidents, as well as PCC student leadership. I was elected by my peers statewide and nationally to serve on the respective trustee boards. My reputation as a collegial and collaborative leader have helped me garner support across college constituencies to change legislation and practices to benefit our students.”

Along with her concerns about leadership at the college board level, Kwong says PCC “has had a history of high turnover in presidents and it was placed on probation by the accrediting agencies.”

She insists the sole reason for the probation was “the dysfunctional and incompetent leadership from the board of trustees, noting “I care too much about our students to allow this to continue any longer. For many people, PCC is the only pathway to attaining their dream of a college education. We cannot allow the current dysfunction to prevent students from succeeding.”

Kwong stressed that she looks to offer new leadership “so PCC remains a trustworthy and reliable institution for our students.”

Further, Kwong said, “I also want to improve the academic climate and foster a relationship of trust and respect so faculty can focus on delivering exceptional instruction.  I also want to enhance dual enrollment in our local high schools.  Duel enrollment allows students to take college credit courses while in high school and allow them to immerse themselves in a college curriculum to prepare students for college.”

On the other side, Wah is pushing the college’s strengths, saying,  “For the past six years, PCC has been ranked among the top 10 community colleges in the nation.”

And the college’s honors hardly stop there, she insists.

“In 2021, PCC was awarded $30 million by the McKenzie Scott Foundation based on our innovative programs and student success,” Wah explained.

In addition, in the same year she said PCC received “an outstanding review” and the college’s accreditation was reaffirmed for seven years, which is “given only to a few outstanding colleges,” she said.

As an education lawyer, Kwong helps schools and community colleges solve legal problems. Over the years, she has trained a large number of school administrators on staying in compliance with the law.

“I will provide new leadership to Pasadena City College and work to build an effective Board to establish strong policies,” she said. “I will work to establish a relationship of trust and respect with faculty, staff and all community stakeholders.  I will conduct outreach to our local high schools to expand dual enrollment and make PCC more visible to the students.”

As the Area 5 Trustee, Wah said she has successfully advocated for early college access through dual enrollment.

“Today we have MOUs (memorandum of understanding) with all K-12 districts under PCC.  “South Pasadena and San Marino have strong enrollments where our students earn high school credit and college credit simultaneously,” she said, adding that the Career Pathways program helps PCC students explore career opportunities.

Wah also said she’s been behind efforts to strengthen college readiness “of our high school students through strong outreach partnerships, where PCC holds parent/student events to explore college options at and beyond community college.”

On her website Kwong said PCC “serves as the primary, and sometimes only, gateway toward higher education for our students. We can not allow apathy, dysfunction or mismanagement to keep students from succeeding.”

Away from work, she enjoys a round of golf, scuba diving and playing piano at various events. Before the COVID-19 pandemic, she performed around town with a women’s choir. She also recognized as an accomplished classical pianist, often volunteering to perform at retirement homes and a variety of locations around the area.

“My family have been residents of South Pasadena for over 50 years,” she said.  “My siblings all grew up and graduated from South Pasadena High School, and they continued to live here and raise their family in the city.”

Wah, a resident of San Marino, said her re-election campaign is rooted in the community. “I have put in the work and time to build strong relationships throughout the district’s neighborhoods and have developed trust with our students, my K-12 partners, and our community organizations,” she said. “I continue to communicate the achievements and opportunities of PCC, and I am urging our communities to make their decision based on facts not fabrications.”

PCC, she added, has “great history in our community. I always meet someone has gone to PCC, has a student at PCC, or knows someone who works at PCC. It is also a place for lifelong learners, where many in our community want to continue learning new skills e.g., languages, arts, and just engaging in continuing education for enrichment.”