South Pasadenans, it’s time to break out the boots and gloves and take a trip to Almost, Maine, the delightful fall production that SPHS Drama is about to share with the community. It’s a cold winter night, the Northern Lights appear in the sky above Almost and odd things start happening to its residents. There are twenty characters, played by fourteen actors and each of them will find themselves on a precipice of something profound in their lives.

New drama department head, Nick Hoffa, says he feels really great about where the play is at, “there’s still a lot to do as far as props, costumes, logistics and set stuff but I feel like if we just did it without that stuff, it would still be pretty good. So I feel happy about it.” This is Hoffa’s first show as director at SPHS but he says, “I’m really not thinking about it as a high school production. I’m engaged artistically in this. I feel excited by what they’re doing. I sometimes have to stop myself to remember that they have homework because when we’re rehearsing, it feels like a rehearsal process that I’m comfortable and familiar with on a professional level. In that sense I feel artistically excited by the process.”

For his part, senior Wressey Baugham tells us that because each scene is a little piece unto itself, he really enjoyed being able to work on that piece in its entirety at each rehearsal and says of the impending opening, “how do you describe the wonder of opening night? Just going up there and showing it to everyone; this play that you’ve spent this time with and you’ve enjoyed and it’s great to see other people enjoy it too.”

One of the show’s producers, junior Renata Vargas, was a part of the crew on last year’s spring production and is loving being one of the five student producers working on costumes and props and as she says “being in charge of stuff.” She concedes that it has been stressful but adds “it’s been fun, I’ve learned a lot. I find the show itself really funny!”

Yoli Patzkowski is a junior and was last seen in the 2016 fall play, Witness For The Prosecution, and says the rehearsal process has gone incredibly well.  “Because the play is in vignettes, I don’t feel a lot of pressure. We can be very specific and I think Mr. Hoffa is a great director. I’m just really excited and I think it’s going to turn out really well.”

Junior Lindsey Calva is finally breaking out of her “mom” roles and getting to do some delving in what she describes as “digging deep into character development which has been really different and exciting. I’m so excited!”

This is the first SPHS production for sophomore Anna Gale and she says “I love hanging out with everyone in the cast; they’re a really fun group of people and it’s been really fun to be in a production again because I don’t really get the chance to do this because I don’t live here.” Gale’s mother is a teacher at the high school so she comes to SPHS from Tujunga and says, “being able to come here and do this production is really fun. It’s been amazing and Mr. Hoffa is so great and everyone in the cast is amazing and supportive.”

The cast has just completed weeks of intensive rehearsals before heading off in all directions for Thanksgiving break. Immediately upon returning on November 27 they will head into hours of technical rehearsal to nail down all the lighting and sound cues and those aforementioned logistics to bring it all together for their opening on Friday December 1st. Of the play itself Hoffa says, “it’s just such an enjoyable show. These characters are so likeable and sad and weird but I think people will right away “get it”. Even from the very first moment, there are two people who can’t say “I love you” to each other and that’s the very first moment of the play and it’s funny, relatable, sad, heartbreaking and in the end….well, come see what happens in the end! I’m just excited for people to see these guys be as charming as I think they’re being.” 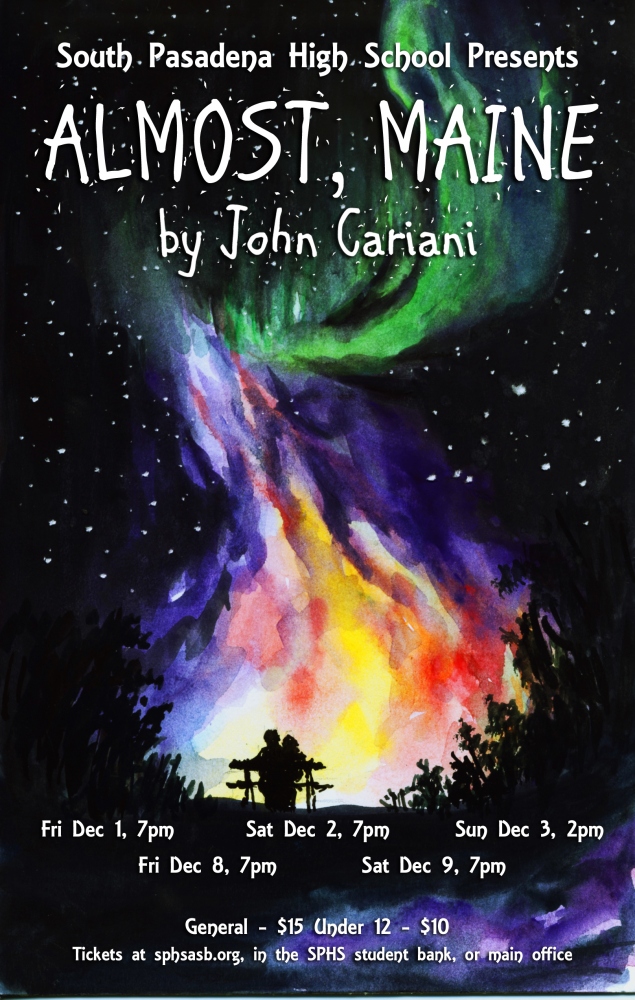