Pasadena Playhouse – Jungle Book – July 17-29, the Playhouse presents a newly adapted, family-friendly production of the beloved Rudyard Kipling classic. Written and directed by Craig Francis and Rick Miller, Jungle Book is described as a very theatrical adaptation that employs a rich soundscape, immersive multimedia, inventive puppetry and a variety of new and traditional theatrical traditions to transport audiences to the world’s jungles. All your favorites are here from Mowgli to Baloo and Kaa. Tickets at PasadenaPlayhouse.org or calling (626) 356-7529. Box office located at 39 South El Molino Avenue.

The Ahmanson – The Humans – Through July 29 – Led by two-time Tony Award-winning director Joe Mantello, Reed Birney and Jayne Houdyshell who reprise their Tony Award-winning performances in The Humans for the last stop of the national tour at the Ahmanson. Breaking with tradition, Erik Blake (Birney) has brought his Pennsylvania family to celebrate and give thanks at his daughter’s apartment in lower Manhattan. As darkness falls outside the ramshackle prewar duplex, and eerie things start to go bump in the night, the Blake clan’s deepest fears and greatest follies are laid bare. Our modern age of anxiety is keenly observed, with humor and compassion, in this new American classic. Tickets (213) 972-4400,  CenterTheatreGroup.org   The Ahmanson Theatre is located at The Music Center, 135 N. Grand Avenue in Downtown Los Angeles.

Young Stars Theatre – Summer Camp shows continue through August with the delightful Aladdin Jr. playing July 14-15 and July 20-22. Aladdin vies for the attention of princess Jasmine using a genie’s magic power to become a prince in order to marry her. It’s a musical adventure filled with magic, mayhem and the power of love. The final summer show is The Music Man, playing August 4-5 and August 10-12. This tale of the traveling salesman who meets his match in the stubborn Iowa townsfolk is chockfull of Broadway classics like “Wells Fargo Wagon” and “Trouble”. Stay tuned for YST’s full scale fall production of Beauty and The Beast Jr! Tickets and info at YoungStarsTheatre.org  All shows at the YST residence Fremont Centre Theatre, 1000 Fremont Avenue in South Pasadena.

Fremont Centre Theatre – Also at FCT this summer is a production of Mary of the Avenue, an original musical produced by Theatre Americana. The story is about Carrie, a young woman who is in search of her long-lost mother. Carrie believes her mother, Mary, is living on the streets in New York City and she takes to the streets to find her. August 17 through August 26. Tickets $20 at brownpapertickets.com $25 at the door. 1000 Fremont Avenue.

A Noise Within – August 16-Sept. 9 – ANW brings back their “crackling reimagining of the musical Man Of La Mancha” by popular demand this summer! Inspired by the novel “Don Quixote de La Mancha” by the keen satirist of 17th century Spanish literature, Miguel de Cervantes, the musical places us in prison with the author where he recruits his fellow prisoners to act out his novel as he awaits questioning by the Spanish Inquisition. Read the review here. Located at 3352 E. Foothill Blvd, Pasadena, CA 91107 Check out their new season “Let Me In” at anoisewithin.org (626) 356-3100 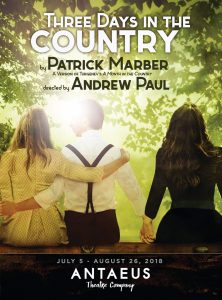 Antaeus Theatre Company – Three Days in the Country – July 12- August 26. Full of wit, folly and heart, a tale of unrequited passion unfolds over the course of three days in the sunny Russian countryside as men and women, both young and old, learn the tender and ridiculous lessons of love. Patrick Marber’s remarkable new adaptation is set in motion when a handsome new tutor arrives at a beautiful country estate, bringing reckless, romantic desire to its eccentric household. Tickets call 818-506-1983 or go to www.antaeus.org The Kiki & David Gindler Performing Arts Center is located at 110 East Broadway in Glendale

Glendale Centre Theatre – Mary Poppins – July 13 – August 25. Winner of 3 Tony Awards, Disney’s and Cameron Mackintosh’s beloved musical flies into downtown Glendale and lands on GCT’s magical stage! This show is practically perfect in every way and includes all of your favorite songs including “Spoonful of Sugar” and “Chim Chim Cher-ee”. Mary Poppins is breathtakingly beautiful and full of dancing and heart. It’s simply Supercalifragilisticexpialidocious! Tickets at GlendaleCentreTheatre.org or call (818) 244-8481. Located at 324 North Orange Street in Glendale.