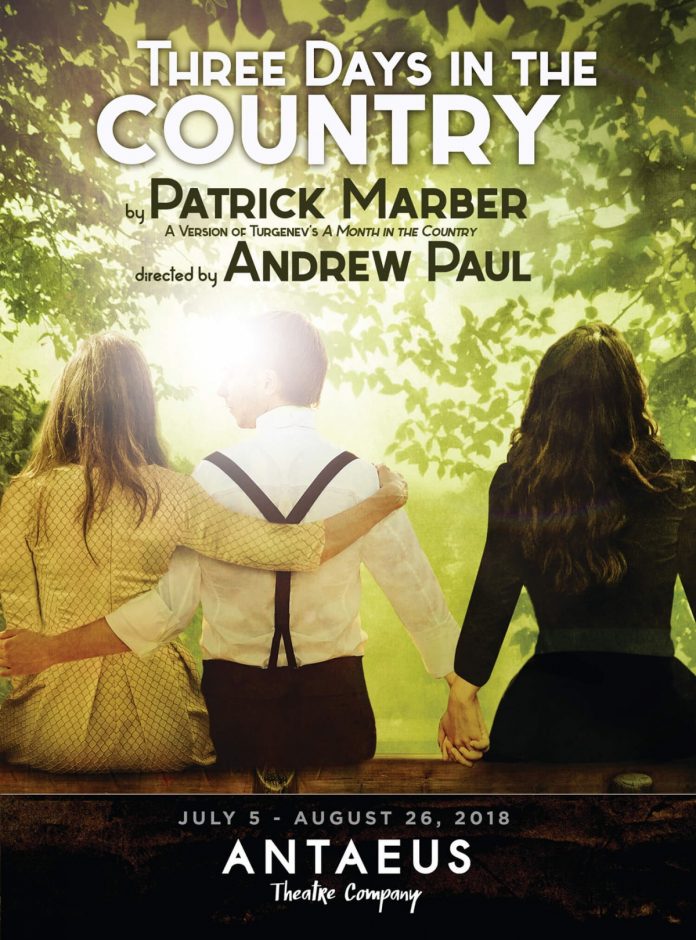 Full of wit, folly and heart, a tale of unrequited passion unfolds over the course of three days in the sunny Russian countryside as men and women, both young and old, learn the tender and ridiculous lessons of love. Antaeus Theatre Company presents the West Coast premiere of Three Days in the Country by Patrick Marber, a fresh, breezy update of Ivan Turgenev’s classic comedy A Month in the Country.

Andrew Paul directs the partner-cast ensemble for a July 12 and July 13 opening (one opening night for each cast) at the Kiki & David Gindler Performing Arts Center in Glendale, where performances continue through Aug. 26. Low-priced previews begin July 5.

In the Antaeus tradition known as “partner casting,” Anna Khaja and Nike Doukas share the role of Natalya, the bored wife of rich landowner Arkady (Antonio Jaramillo and Daniel Blinkoff), who is yearned after by family friend Rakitin (Corey Brill and Leo Marks). When Belyaev (Will Bradley and Peter Mendoza) arrives to tutor Natalya’s young son, Kolya (Elijah Justice and Marcello Silva), Natalya falls in love with him — but so do both her ward, Vera (Chelsea Kurtz and Jeanne Syquia), and the servant, Katya (Ellis Greer and Lila Dupree).

“You really get swept up in this play,” says Paul, who directed the U.S. premiere for Pittsburgh’s Kinetic Theatre Company, where he is founding artistic director, in a production that featured Doukas and Marks. “Everybody has their heart broken. The laughs and emotion are irresistible.”

According to Antaeus co-artistic directors Bill Brochtrup, Rob Nagle and Kitty Swink, Marber’s new version, as the title suggests, is faster and more irreverent than the original.

“It feels like a newly found classic,” they concur. “Funny, real and timeless it’s full of all the thwarted summer romance and unrequited passion that we love in Russian plays, yet feels extremely fresh and new.”

Andrew Paul is the founder and producing director of Kinetic Theatre Company in Pittsburgh, PA, where he has directed all 11 of the company’s Pittsburgh premiere productions including the U.S. premiere of Marber’s Three Days in the Country.

Before that, he co-founded the acclaimed Pittsburgh Irish and Classical Theatre (PICT), serving as the company’s producing artistic director from 1996 to 2013. Under his leadership, PICT produced more than a hundred plays; festivals devoted to the plays of Samuel Beckett, John Millington Synge, Harold Pinter and Anton Chekhov; and two successful international tours.

In 2008, he directed and collaborated with David Hare on the non-English language premiere of Hare’s play Stuff Happens at the Slaski Theatre in Katowice, Poland. Last year, he directed The Hound of the Baskervilles at Gulfshore Playhouse in Naples, Florida and Richard Greenberg’s Take Me Out for Nevada Conservatory Theatre.

He has taught acting at Duquesne University, directed at Carnegie Mellon University, and has served as a panelist for Theatre Communications Group and the Pennsylvania Council on the Arts. In 2010, Andrew was a featured speaker at the World Theatre Conference in Baku, Azerbaijan.

His extensive television work includes After Miss Julie, which he adapted and directed for the BBC2 Performance series. He has co-written and appeared in the award-winning comedy programs The Day Today, The Paul Calf Video Diary, Knowing Me, Knowing You…With Alan Partridge, and Three Fights, Two Weddings and a Funeral. As a director, he is a current Tony nominee for Roundabout Theatre’s revival of Travesties by Tom Stoppard.

Antaeus is a cooperative theater ensemble founded to empower the actor and to bring classical theater to Southern California. The company exists to create a family of artists and audiences and is dedicated to exploring stories with enduring themes. Taking their company name from the Titan who gained strength by touching the Earth, Antaeus members — many of whom are familiar to film and television audiences — regain their creative strength by returning to the wellspring of their craft: live theater.

Members of the company span a wide range of age, ethnicity and experience; they have performed on Broadway, at major regional theaters across the country, in film, television and on local stages, and are the recipients of numerous accolades and awards. Audiences frequently return to see the same play in the hands of an equally excellent but very different set of actors.

The Kiki & David Gindler Performing Arts Center complements Glendale’s ongoing commitment to integrate vibrant arts space into the fabric of city life, ensuring the arts remain accessible to all. Located just a few blocks away from The Americana at Brand and the remodeled Glendale Central Library as well as the Alex Theatre, the center promises to build upon Glendale’s growing reputation as an arts and entertainment destination. The center includes an 80-seat theater, a reconfigurable 45-seat performance/classroom space, and a theater classics library.

Tickets are $30 on Thursdays, Fridays and Mondays (except Thursday, July 12 and Friday, July 13, for which tickets are $34 and include a post-performance reception) and $34 on Saturdays and Sundays. Preview tickets are priced at $15. Antaeus Theatre Company has partnered with TodayTix, the free mobile ticketing platform, to offer a $5 preview lottery; a limited number of $5 tickets will be made available through the TodayTix app for previews.

The Kiki & David Gindler Performing Arts Center is located at 110 East Broadway, Glendale, CA91205 (between N. Brand Blvd. and Maryland Ave.). The first 90 minutes of parking is free – then $2 per hour – in Glendale Marketplace garage located at 120 S. Maryland Ave (between Broadway and Harvard). The theater is air-conditioned and wheelchair accessible.