As we head into mid February during a global pandemic, it’s hard to keep track of the normal traditions and activities like football games, Homecoming, and the high school plays. While the actual performance and online premiere of SPHS Drama’s Macbeth is happening later due to Covid-19 restrictions, the cast and crew have been hard at work to bring us a unique filmed production. In other words, the show must go on! So given all the constraints, you may be wondering why of all things they would decide to take on something as ambitious as a full Shakespeare tragedy. Director Nick Hoffa explains, “while I love the musicals, in the Spring, the  plays are where I look to really push the students; we’re going to do something new and interesting.”

In fact Hoffa has had this specific play in mind for a while. “It’s my favorite one, it’s the most action-packed with short scenes without a lot of philosophizing that is hard to understand…it’s really a very accessible play.” He says the students had always had great concern about doing Shakespeare because none of them have much, if any, experience with doing Shakespeare before. Even though it might sound odd to do something this challenging during Covid, the pandemic actually made this choice more feasible and possible for a couple of reasons; He was committed to not cancelling the play. And since there are no rights to pay because it’s Shakespeare, it meant that whatever version they ended up having to perform, they would have the flexibility to adapt.

“I knew the learning of the material, because we’re stuck on Zoom, was going to need to be really interesting,” explains Hoffa, “this group of actors is very experienced and very comfortable with contemporary material and so I think something very simple would not have been very interesting to them to work on. Whereas with Macbeth, we meet and it’s like decoding a puzzle every time we get to a scene; we look at it together, we discover things together and we say “oh that’s so cool!” It has made the Zoom rehearsals really interesting and I think they are really engaged; it’s an intellectual exercise as much as it is an acting exercise.”

Senior Julianna Chabot tells us, “delving into an entire Shakespeare play was super intimidating at first, but I have actually loved doing it. It is really challenging, I won’t lie, but it has forced me to focus on analyzing his language further so that I could properly depict the right emotions. It has been so much fun and I would be much more willing to dive into Shakespeare in the future.” Chabot plays Malcolm, heir to King Duncan’s throne, and says of the role, “I have noticed the cleverness and smarts that the character has which makes it a really fun role and one I am proud to play!”

“Even though it’s a challenge to pull off, it allows us to stay creatively engaged over a computer because there is so much work to do that’s really interesting in terms of understanding what’s going on” says Hoffa, “there is a lot of uncovering and you do feel like you’re code breaking a little.”

As in Shakespeare’s time, there is some cross-gendered casting, which Hoffa says was not a conscious choice but rather a question of who had the “qualities of Malcolm, what are the qualities of Lady Macbeth and what’s the best cast for this show. It’s not a play populated with teenagers like Romeo & Juliet. It’s generally populated with characters who are full on grown-ups and so we’re far away from that with high school casting anyway. It gives us the flexibility to interpret it differently and in doing so we’ve discovered some really interesting things having to do with gender roles and what it means to be feminine or masculine.”

Initially skeptical about how they were going to “do drama” and rehearse over Zoom, Hoffa has been happily surprised at how well they’ve done and how enthusiastic the students have been. “There are limitations like someone may say, “I can’t scream right now”, so it’s not perfect,” he says, “I also think there’s something about the safe space of the theater that lets kids let loose a little bit more, so we’re always battling that. For young actors to tackle Shakespeare, you’re trying to get them to understand that these are real people and with Macbeth the characters are really well drawn and complex, full of ambiguity and full of all kinds of nuance. So there’s something about having the camera right “there” and being able to say the lines simply and naturally that has actually allowed them to access the material in a pretty good way. So I think that’s been a benefit and a positive.”

Echoing that sentiment Chabot says she has grown in her confidence in unexpected ways over the course of the online rehearsals saying, “maybe it’s because I’m in the comfort of my home, or maybe I’ve just pushed myself further, but I have really liked the progress I have seen in myself. I do really miss getting to meet new people in person and make new friendships, but I am so happy to do this and have this amazing artistic outlet and be able to continue doing what I love when I didn’t think we’d be able to.”

While Karenna Senske, who plays the young noble Lennox, acknowledges that working over Zoom has been a lot more difficult compared to other years, she says, “Mr. Hoffa and my cast mates make the rehearsals really enjoyable and fun despite not being able to be physically together.” She goes on to say that having virtual rehearsals has simultaneously been the hardest and most interesting part of the whole process and explains, “we have fight scenes where it feels weird to swing, or pretend to swing, a sword around the room by ourselves and there are scenes that are more intimate and would be done best face to face. However, I also think that with Shakespeare, because the language is so different, it is easier to have rehearsals where we can focus on the language rather than try to figure out blocking and the language.” 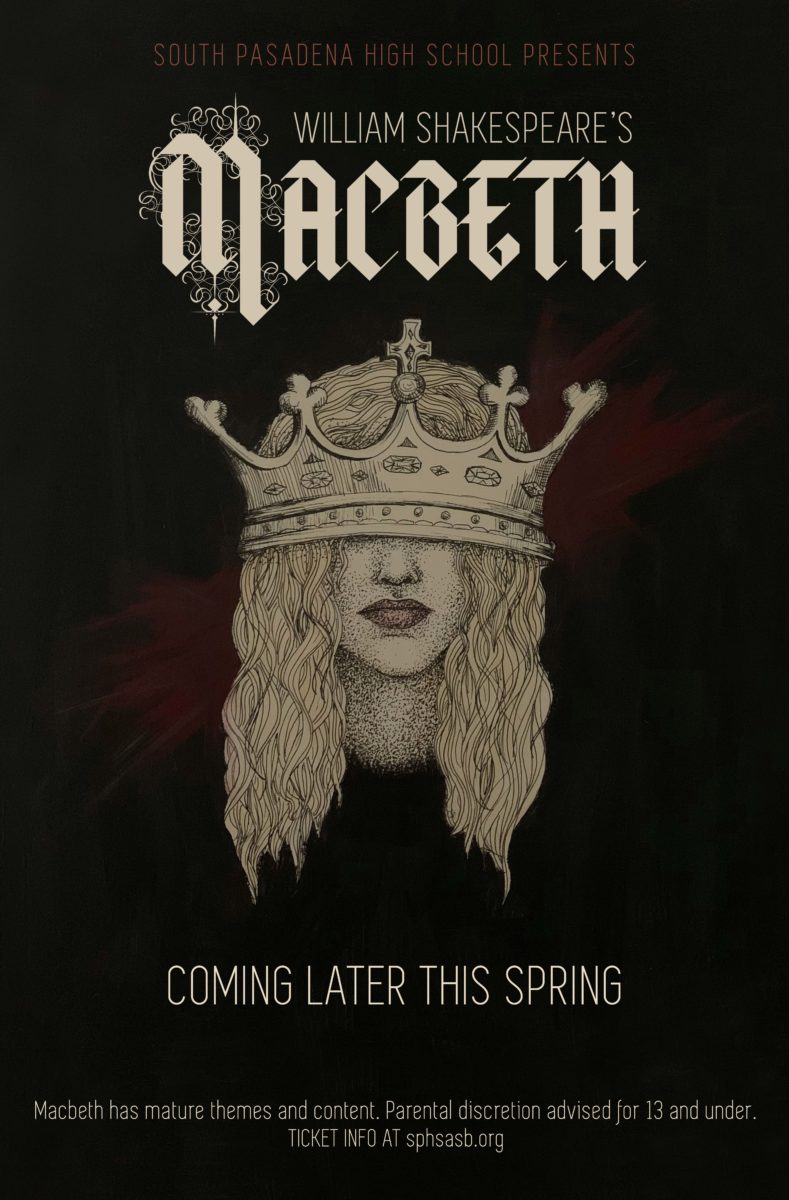 Technical Director James Jontz and Hoffa, like all theatre producers across the globe, have had to turn SPHS Drama into a multi-media company, suddenly dealing with editors, green screens, filming, and streaming. While the filming will only take place once conditions are safe, the current plan is for Jontz and Hoffa to film the students one at a time against a green screen and then put the actors together against digital backgrounds in post-production. The final production will have music, sound, fully-costumed and made-up actors, and be streamed out later in the spring.

While this is a digital production, the show’s four student producers have taken pains to make sure the cast still will have many of the normal physical objects they would under normal circumstances. The producers continue to shuttle around town to each actor’s home, delivering scripts, props, individualized make-up kits, costumes, and of course, many swords! They are assistant directors and will take on new roles as production assistants and digital editors after filming. Adding to the tactile nature of rehearsals, actors have also been working over zoom with a fight coordinator for the many sword fights and will be learning how to do their own battle make-up from SPHS alum, Grace Chavez.

For the actors, having this creative outlet has certainly been a boon during this difficult time. Hoffa says “they have been incredibly engaged and ready to work and I think they have loved having something fun and challenging to work on.” He adds, “this play is fun you know?  We’ve got ghosts, witches, murders, action scenes and sword fighting! If we can pull this off, I think they can look back and say ‘you know what we did during the pandemic? We did MACBETH!”

To view Macbeth from the comfort of your home while supporting SPHS DRAMA, purchase your streaming tickets at SPHSASB.ORG