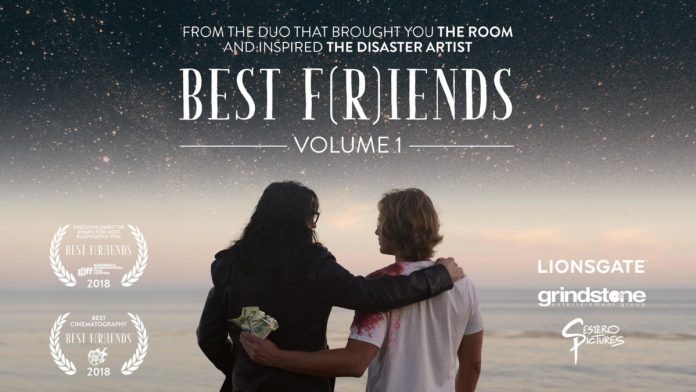 On November 29 at 7 p.m., a Library Film Night screening of “Best Fr(r)iends, Volume 1” will be presented in the Community Room. The 2018 film, released recently by Lionsgate, showcases the talents of writer and co-star Greg Sestero, a South Pasadena resident. The film reunites Greg with co-star Tommy Wiseau, a cult figure with fans the world over. The duo first joined forces in 2003’s “The Room” and were portrayed by James and Dave Franco in “The Disaster Artist,” a 2017 feature nominated for two Golden Globes and an Academy Award. The Library presentation of “Best F(r)iends, Volume 1” will include an intro by Greg Sestero and a Q&A that also features female lead Kristen StephensonPino, and Carl Kozlowski, the Arts Editor from the Pasadena Weekly.

Jon Kortina (Greg) is a drifter who is taken in by a peculiar mortician (Tommy), and the two form a friendship while building an enterprise in a seedy LA area before jealousy, secrets, romance, and betrayal threaten to tear the two apart. Many of the scenes were filmed in South Pasadena. According to Greg, “I chose South Pasadena as it’s been my home for over 10 years. I think it’s a cinematic gem that has been a location for some on my favorite films –and some of the most important films ever made. I’ve always wanted to share my love for the city in a movie and chose “Best Friends” to celebrate my years living here.”

The Library Film Night is presented by the South Pasadena Public Library and the Friends of the South Pasadena Public Library, with special thanks to 210eastsound, the Friends of the Rialto Theatre, and Lionsgate International. The Library Community Room is located at 1115 El Centro Street. Doors will open for the free event at 6:30 p.m. No tickets or reservations are necessary and refreshments will be served. For more information please call 626 403-7350.

Free parking is available after noon at the Mission Meridian Parking Garage located at 805 Meridian Avenue adjacent to the Metro Gold Line Station, only one block from the Library. Upon request made no later than four (4) business days before the event, the City will provide a reasonable accommodation for a qualified person with a disability to have equal access to the event. Please contact ADA Coordinator and Human Resources Manager, Mariam Lee Ko, at (626) 403-7312 or fill out the City’s request form available at www.southpasadenaca.gov and email the form to Human Resources at HR@southpasadenaca.gov