A remarkable feat, Alan Vlacich says he’s recorded “maybe four holes in one,” most of them at the Arroyo Seco Golf Course in South Pasadena during his lifetime.

Most golfers who have played the game as long as Vlacich don’t have a single one. The exact number is uncertain because the modest 72-year-old points out they occurred a long time ago when he was attending junior high or high school in the city.

Vlacich will be in pursuit of another ace, much like he does every year, when he takes part in the South Pasadena Tournament of Rose Golf Tournament – a major fundraiser for the city’s float that traditionally takes part in Pasadena’s Rose Parade in January.

A hole in one in the June 25 event will net a golfer $10,000 in prize money for making the perfect shot on the 139-yard, 7th hole. Vlacich knows all about it, because he’s a regular participant and also the tournament director.

“I always pay $10 because I want to support our South Pas float,” said Vlacich, noting that if he didn’t make the additional contribution and sank a hole in one, those in his foursome “would never let me forget it.”

Registration is underway for the popular 2022 South Pasadena Tournament of Roses Golf Tournament that raised roughly $16,000 a year ago.

Entry fees of $90 (paid by June 20 or $100 the day of event) includes a round of golf, lunch, awards and drawing, but for an additional $10 donation, golfers can take a swing at winning the big money on the sponsored hole by Mamma’s Brick Oven Pizza & Pasta in town. Foursomes can save by signing up for $300

Signups at the course on the day of the event starts at 7 a.m. with a shotgun, best ball start beginning at 8 a.m. on the 18-hole, 3-par course. Tournament proceeds will defray the cost of steel and flower along with other materials associated with constructing South Pasadena’s float.

“First to have a great time outdoors with friends and family,” said Vlacich, when asked why golfers should register to play. “Second, to help raise money for the South Pasadena Float.”

The tournament attracts both top golfers and others just starting out playing the game. The best ball tournament allows for plenty of misfired shots. “If you hit a bad one you play your next shot from the team’s best ball,” explained Vlacich.

Persons can also pitch into the tourney with a sponsorship. At the $700 Gold level, supporters receive green fees for eight persons, eight lunches, and 12 raffle tickets. The sponsorship also includes recognition in brochures and signage.

Tee signs can be purchased for $125 each.

For more information, including sponsorships, email Alan Vlacich at alan@smmainsurance.com or give him a call at (626) 233-5570. 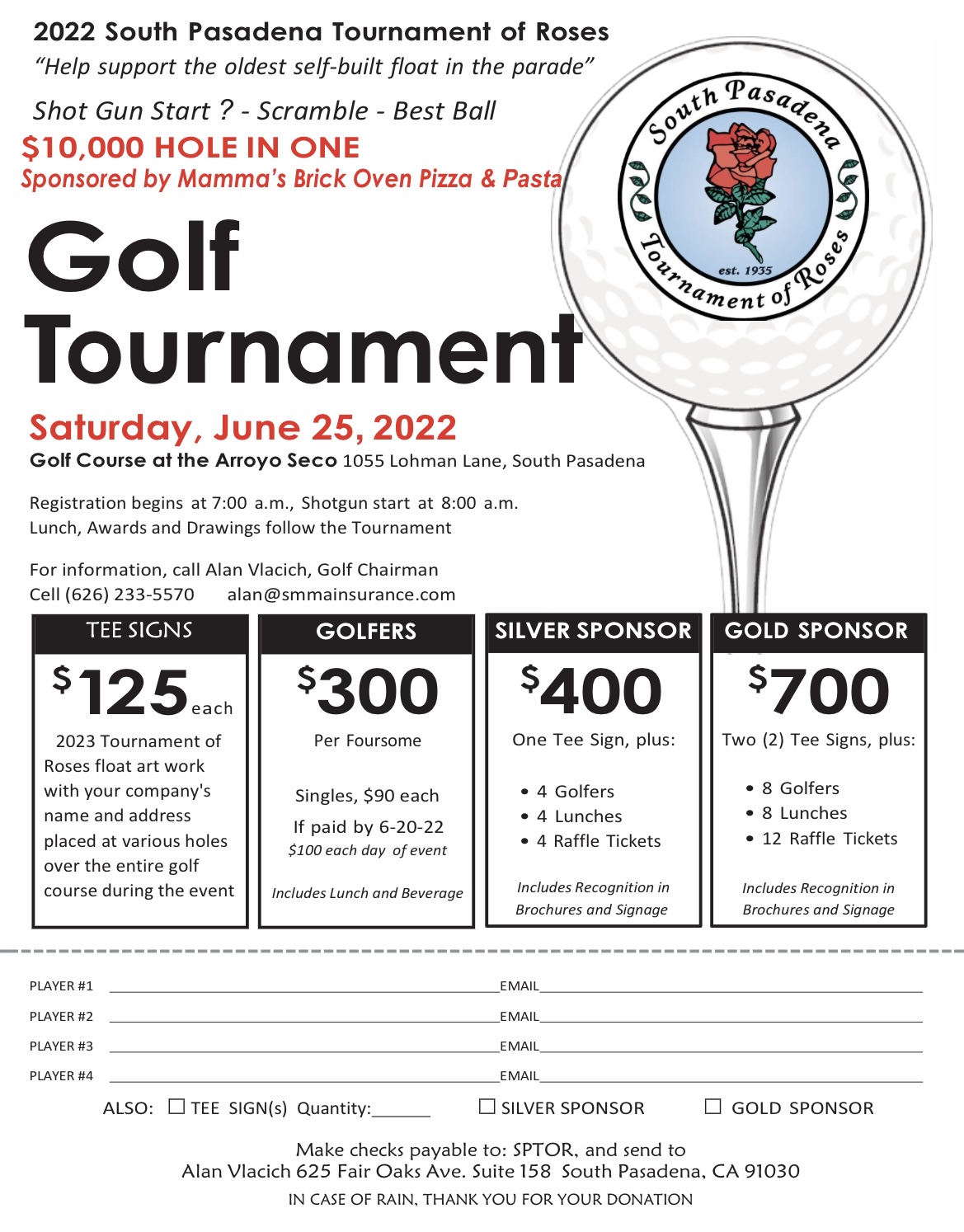