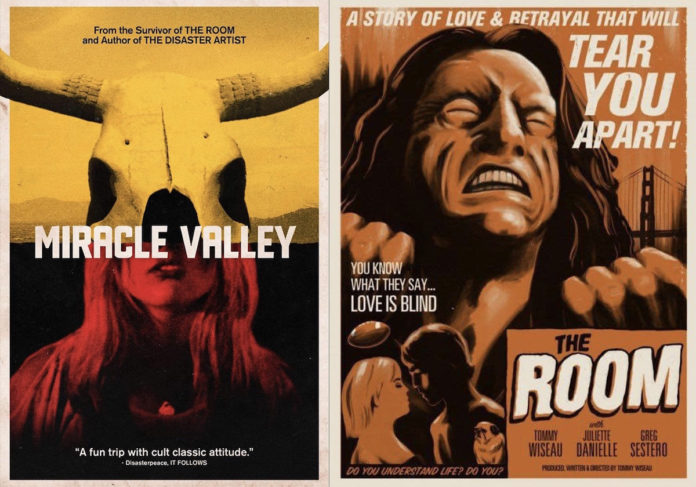 The second feature is “Miracle Valley” (2021), a horror film thriller, written, directed, and starring Sestero will be presented. This special double feature event is sponsored by The South Pasadenan & Hotbox Vintage. The showing is at Hotbox Vintage on Mission Street in South Pasadena.

Tickets for the showings are only $15 and are available now online: CLICK HERE FOR TICKETS LIMITED SEATING – DON’T DELAY

It has almost been two decades since “The Room” (Rated R) was unleashed upon unsuspecting moviegoers. With a whopping $6 million budget of mysterious origin and a completely unknown filmmaker and cast, it was immediately panned by a few critics. Because of poor attendance, “The Room” was then unceremoniously yanked from movie theatres and silently disappeared. Undaunted, Wiseau struck back by scheduling it for a few midnight theater engagements. Surprisingly, word-of-mouth gave it new life and it eventually achieved a worldwide cult status after screenings across the U.S., Canada, Scandinavia, the UK, Australia, and New Zealand.

Despite its astonishing success, “The Room” contains enough blurry shots, continuity errors, random edits, and wooden acting to be dubbed an anti-masterpiece. But it’s rescued by its disarming sincerity more than anything else. It tries so hard to be good even though it misses the mark by several miles. “The Room” has by now been used by film school professors for teaching students what not to do. The film has also fascinated Hollywood celebrities like Judd Apatow, Paul Rudd, and Kristen Bell who have attended its midnight showings and held their own private screenings. These days “The Room” is widely recognized as a bona fide classic of midnight cinema. Nevertheless, “The Room” has never been shown in a public venue in Sestero’s adopted hometown of South Pasadena, or for that matter, anywhere else in the San Gabriel Valley or Northeast Los Angeles.

By 2013, “The Room” had spawned a NY Times Bestseller, “The Disaster Artist” written by Greg Sestero that was adapted into a multi-award-winning film of the same name in 2017. It’s chock full of Hollywood A-listers like James and Dave Franco, Bryan Cranston, Seth Rogen, Zac Efron, Sharon Stone, Melanie Griffith, and Alison Brie. Nowadays, all around the world, enthusiastic fans of “The Room” quote the script, dress like its characters, and toss plastic spoons as the choppy plot about a successful banker named Johnny attempts to gather momentum and coherence.

Johnny thinks he’s living in domestic bliss with his fiancée, who, against her better judgement, seduces his best friend, Mark. By the time Johnny snarls “You’re tearing me apart, Lisa!,” probably the film’s most enduring line, the story has staggered unsteadily onward, almost tripping over its many loose ends along the way. Nevertheless, Johnny, as portrayed by Wiseau, unrelentingly charges on. In so doing, he becomes an underdog hero for the ages.

Sestero wrote and produced “Best F(r)iends” (2017), a vehicle for a reunion of Tommy and himself. Greg then scored some horror film chops in Netflix’s “Haunting of Bly Manor” and 2020’s “Cyst.” Greg’s directorial debut, “Miracle Valley” was shot mostly in Arizona. It is also the first film to shoot at Fallingwater, Frank Lloyd Wright’s UNESCO World Heritage site in Pennsylvania. The story revolves around a dedicated nature photographer who makes a pilgrimage with his girlfriend to a remote desert ranch to try to capture the elusive image of a rare hawk. The couple become ensnared in the evil web of a charismatic cult leader and his flock of brainwashed followers.

A special appearance by Greg Sestero will offer his own introduction to “Miracle Valley” (not yet rated).

Horror and thriller films are almost always best experienced with a live audience and “The Room” and “Miracle Valley” are both expected to connect in a big way. Audience enthusiasm for the films should be especially palpable since South Pasadena has long been considered a Halloween mecca. It’s also the place where Kevin Foxe, one of its residents in 1999, rose from relative obscurity to produce “The Blair Witch Project,” a horror film that made a gigantic splash at the box office. It was also revolutionary for its use of social media marketing and hand-held camera work.

South Pasadena, although it was called Haddonfield in the film, is also the fertile breeding ground of John Carpenter’s iconic “Halloween” (1978). “Halloween” is not only one of the most successful fright films ever made, but also the most lucrative film franchise of all. The original “Halloween” has fathered no less than 11 follow-ups in the form of sequels and remakes. Together they have grossed over $640 million worldwide. Carpenter’s latest installment, “Halloween Kills” just pulled in $50 million during its first weekend. The 2021 Halloween Season has already gotten off to sensational start and there’s no letup in sight until at least November.

WHERE: hotbox vintage is located at 1127 Mission Steet; South Pasadena, CA 91030. Seating begins at 6:45 p.m. and seating is outdoors, with chairs “Festival Style” —first come, first seated. Bring something cozy! This is an OUTDOOR event.

SEATING IS LIMTED! This special screening may sell out- get your tickets early online here: MOVIE TICKETS

Both movies will be screened in Blu-Ray with professional projection equipment on a giant screen, but no plastic spoons can be thrown in its direction.