Three South Pasadena police officers showed up at the home of Alison Smith Thursday morning at 1700 block of Hanscom Dr. They had a warrant authorizing them to inspect the premises for “violations of the South Pasadena Municipal Code.”

A substitute teacher and single mother of three, Smith was in a rush to get her children to school. As she stepped on to her carport with her two youngest, she says she saw one police cruiser parked across the street and two more in her driveway, blocking her car. An officer approached her and presented the warrant. He said the city had received complaints from her neighbors. They would be back Friday morning with as many as 15 officers and inspectors to execute the search.

Smith’s 6-year old son asked his mother if she was being arrested. 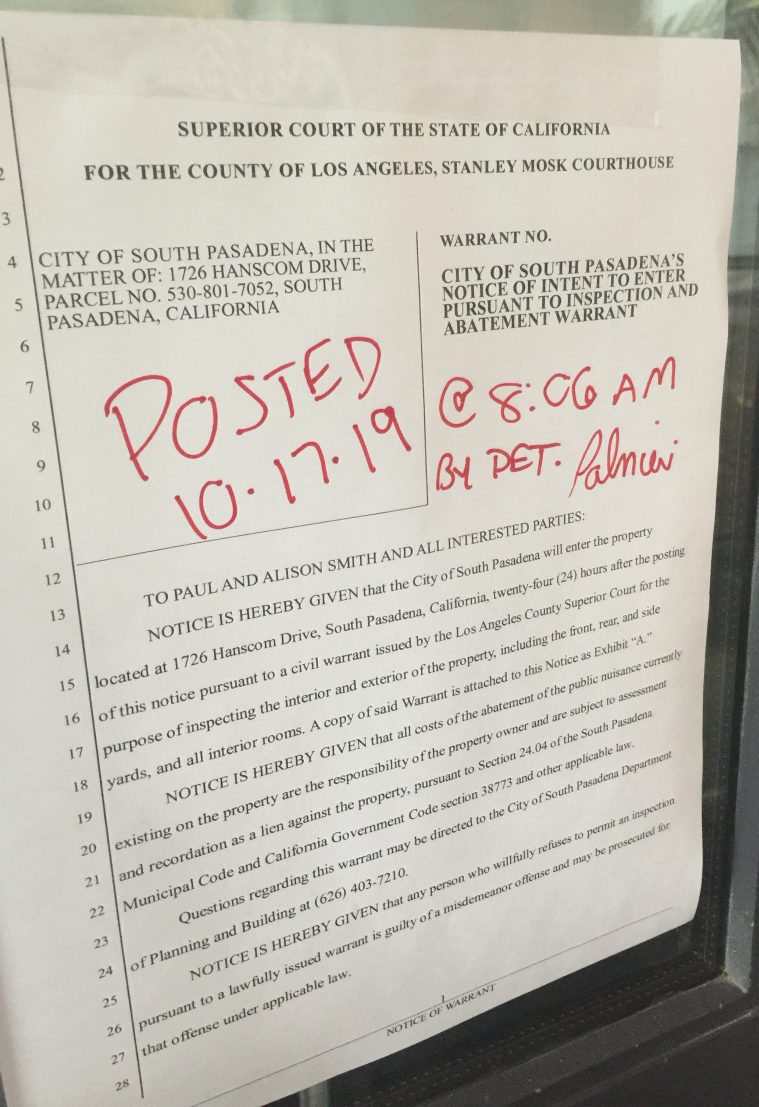 Smith said the police were businesslike but friendly. One confided to her that in his many years on the force, this was the first time he knew of when a police presence was requested to enforce a civil warrant.   “Is that supposed to make me feel better?” she recalls asking him.

South Pasadena police Detective-Sergeant Tom Jacobs told the South Pasadenan News that while three officers were dispatched to serve the warrant Thursday, only one police vehicle was at the scene and that it was a detective vehicle, not a black & white police cruiser.

Nonetheless Smith, her attorney and her supporters are convinced that the warrant and the show of force amounts to retaliation.

“It seems pretty obvious that it was meant to intimidate,” said James Teel Perez.

Perez is representing Smith in a lawsuit against the city seeking damages in connection with the day in January 2018 when a clogged city sewer sent the effluent of up to 17 homes into her backyard. Smith has asserted a property damage figure of $260,000 and an emotional distress claim of $200,000. Last spring, the city offered $12,500.

She tried to work with the city but eventually hired Perez and filed suit in February. Nineteen months after the spill, with the litigation dragging on (the city has yet to file an answer to the complaint), she decided to go public, presenting her case to the City Council during a public meeting Aug. 21.

Six weeks later, she received a certified letter from the city saying there’d been complaints about code violations on her property. They asked permission for an inspection.

Perez acknowledged receipt of the letter but said when he called to ask who filed the complaints, Craig Melicher, the city’s contract building official, refused to say. “I told him it was just too much of a coincidence to think that the Department would all of a sudden want to inspect the client’s property while the lawsuit was pending. I asked if there was a good reason why [the inspection] could not be postponed until the litigation gets resolved.”

Perez said Melicher had no answer, saying only he wanted to find out if there were any violations. Melicher also declined to say who ordered the inspection. 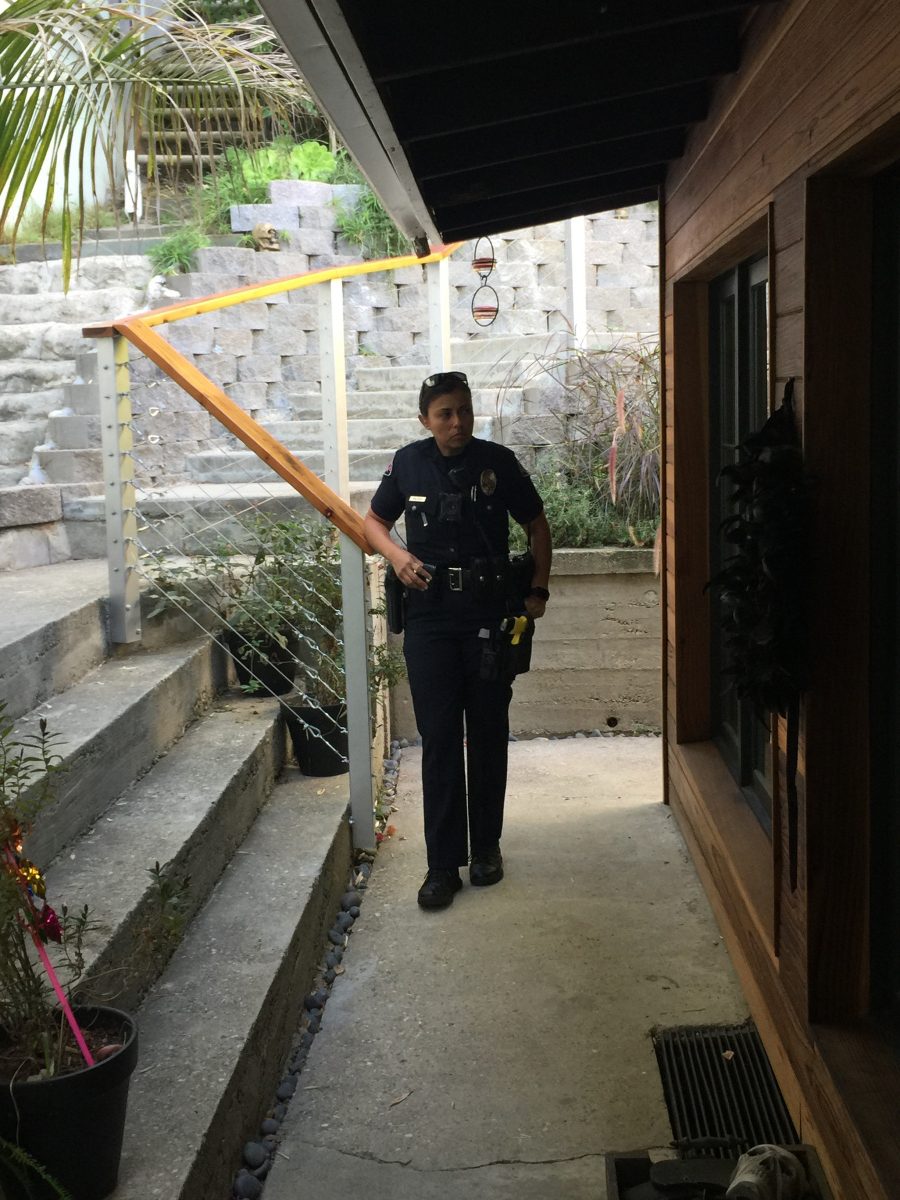 On Friday, Oct. 18 at 10 a.m., four building inspectors—only one actually employed by the city—showed up at the home as one uniformed city police officer stood out front “to keep the peace,” she told a reporter.

As Smith cowered on a sofa, knees wrapped in her arms, Mr. Melicher lead the inspectors as they scrutinized every nook and cranny of her home inside and out, taking pictures, making measurements, all the while being tailed by a mostly silent, camera-wielding gaggle of Smith’s supporters and media representatives.

The inspectors left an hour later without offering comment and deferring all questions to the assistant city attorney. But the city was closed Friday and the attorney could not be reached.

One question that remains is what provoked the inspection. The city’s letter to Smith refers to some “complaints,” but in a statement issued by its press officer John Pope, the city said the inspection was in response to a single complaint “alleging that unauthorized renovations have been made” to Smith’s home, and that city inspectors have “found evidence that exterior renovations have been made” without permits.

In a case management update filed Oct. 10 by the city in the court case, the city accused Smith of failure “to install [a] backflow prevention device,” and failure “to obtain permits for [a] terrace and location of sewer vent pipe.”

Smith said Melicher had previously informed her attorney that based on a Google Earth search, they believed she had built a new roof. She says that is not true. The roof was the one place Friday’s inspectors did not go.

Another question is the extent of the police involvement, both on Thursday and Friday. While Smith and the SPPD both say three officers came to serve the civil warrant on Thursday, Smith says there were three police cars while the police department says there was one unmarked detective vehicle. On Friday, one uniformed officer was present, but a witness, Christopher Bray, said Detective-Sergeant Tom Jacobs, in an unmarked car, “was sitting around the corner on Camino del Sol — and acknowledged, when asked, that he was in the neighborhood for the Alison Smith inspection.”

The South Pasadenan News requested comment from Jacobs about SPPD involvement. While responding to the question about Thursday, he deferred an answer to the situation on Friday to John Pope, the city’s public information officer. But the city is closed on Friday and Pope could not be reached.

A number of citizens are also curious about how often the city uses police in civil enforcement matters. In a 2014 lawsuit in which the city prevailed, Mark Nansen alleged that the “city used its police department to intimidate appellants by having an officer come to appellants’ residence to tell them there was a ‘stop work’ order when no construction was taking place.”

“The South Pasadena Police were mad about being brought in to deal with something that was not within their bailiwick,” said Pasadena attorney Chris Sutton. He said the police department sent the planning department messages asking them not to get the police involved.

According to Smith’s lawsuit, although she immediately notified the city of the spill, for the next 35 hours, the city “failed and/or refused to take the necessary steps” to inspect the waste system or to remedy flow of sludge,” which included feces and tampons.

The suit alleges the muck severely damaged her property, “contaminating the surface and subsurface soils” around the home, including the plaintiff’s children’s play area. In an amended complaint last month, Smith said the city still hasn’t removed or replaced any portion of the contaminated property and that the “nuisance conditions” that were created “remain unabated.”

Although Superior Court Judge John Kralick on Aug. 23 narrowed the causes of action Smith has sought damage under, he gave her time to perfect others. Meantime the city has not answered the original or amended complaints, and recently sought another extension. Smith has asked for a jury trial, but no date has been set.

After the inspectors left, Smith paused at great length when asked for her thoughts.

“I’m gutted,” she said. “I feel that this is an intimidation tactic. I just want the right thing to be done. I never slandered anybody, never put down my city. I just wanted them to take responsibility.”

“It’s chilling for anyone who speaks up at city council meeting,” said Sheila Rossi, a friend of Smith. “It should be scary for all of us.”

Having previously been ambivalent about her attorney’s consideration of adding a civil rights claim to her lawsuit, Smith said she now supports the idea.

“I go into classrooms every single day,” the substitute teacher said. “I talk to the kids about how people don’t choose to be bullies, that they have larger stuff going on at home and unfortunately they bring that to the classroom. I don’t know what’s going on with the city right now, or in the city’s underbelly. But they are being bullies, and I am feeling bullied.”

More on this story as it unfolds.  Please send letters to the editor to: Media@SouthPasadenan.com

Hypertension and Diabetes are Most Common Underlying Health Conditions in COVID-19 Deaths; Vaccination Eligibility Expands to Residents 16 and Over | Public Health