Get ready, South Pasadena, the Eclectic Music Festival is BACK! When? April 30. Where? All over town! Sunday saw the neighborhood kickoff to the Eclectic with a preview party under the tent at Mamma’s Brick Oven, where South Pasadenans gathered for a long awaited return to some normalcy. There, under the tent, we had our town troubadour and all around music producer, Brad Colerick, working the soundboard and introducing some of the musicians that will be featured at the festival. The evening was a fundraiser, which helps keep the music free, featuring a silent and live auction, dinner, socializing, music, and the Creative Community awardees, Ed Donnelly and Jeanie Joe. The evening was hosted by the Eclectic Friends of the Arts and the South Pasadena Chamber of Commerce.

The Creative Community awards are given to two South Pasadenans who have made significant contributions to art, music and culture in South Pasadena. Fremont Centre Theatre owner and SPARC founder, Lissa Reynolds, presented the first award to Jeanie Joe for her costume design and building for various productions at FCT and over ten years of the 5th grade musical. Reynolds recounted a story of a play she was doing at FCT and how it wasn’t until Jeanie Joe brought her the finished costume that she truly could embody her character. Joe says she’s never received an award and was truly honored. She spoke of the magic of seeing the growth of those 5th graders, some shy and unsure of themselves, into confident performers who jump for joy in celebration once that opening night curtain hits the floor. “This feels surreal” Joe said, “I don’t really realize what other people see me as. I don’t always see myself as an artist but then I look back and I go, ‘oh yeah I guess I am’, you know? But tonight I am.” She went on to say, “I didn’t realize that many people were that supportive of me. It’s a cheerful wake-up. I feel very flattered and very excited about it.” The beautiful, glass awards were created by Judson Studios and were commissioned by the Chamber/Eclectic Friends of the Arts.

Kaya Shaffer, described by honoree Ed Donnelly as “one of the most talented musicians I have ever worked with and he is a solid South Pas dad, DUDE, and upstanding human”, presented the award to Donnelly, recounting how they came together playing in a drum circle at Marengo Elementary organized by the ubiquitous DUDES. He went on to talk about Donnelly’s life as a multi-faceted musician and producer who volunteers exhaustively in South Pasadena, is on the SPARC board and is a major arts advocate. Donnelly was grateful and honored saying, “one of the things that I’ve come to realize in the past 21 years of living in South Pasadena is that I am surrounded by a community that not only embraces creativity but embodies it. It’s not proximity to Hollywood or the entertainment industry – it’s much more grassroots than that. To have neighbors and friends that spend their time creating art, supporting art, and making sure the rest of our fellow residents and neighbors are able to appreciate the beauty of this place is very important to me personally.” He went on to talk about how during the pandemic when cities around the nation were erecting barricades in parking lanes to create outdoor eating spaces, “the first thing we did here in South Pasadena was we took those barriers and covered them in art, mostly created by our fellow residents – and that’s just a small example of how important it is for beauty to be on display here publicly.” When asked how he felt being honored in this way, he said, “I never do anything to be recognized, however, I have learned from my good friend, Rex McDaniel, that if someone recognizes you for doing something good, you need to understand how important that is for them to take the time and energy to appreciate what you’ve done and appreciate that yourself.”

The evening wrapped up with a lively, live auction led by former mayor and South Pasadena’s number one music fan, Odom Stamps. All in all, it was a very successful and much needed night out with neighbors and friends to celebrate our artists and our creative community. The Chamber thanks all of the generous donors, attendees, The Eclectic Friends Committee – Sandy Greenstein, Sharon Hannah, Jeanie Joe, Tracy North, Hope Shallcross, and a very special thank you to sponsor Tracy Macrum. Said Chamber President Laurie Wheeler, “What a joy to be able to get together at an event! It was a fabulous evening with friends and neighbors to celebrate the Arts, hear some of the music that will be performed at the Eclectic Music Festival, and, of course, to recognize the incredible work and dedication of Jeanie and Ed to help keep the arts accessible and enjoyable for everyone!”

Let the countdown to Eclectic begin! 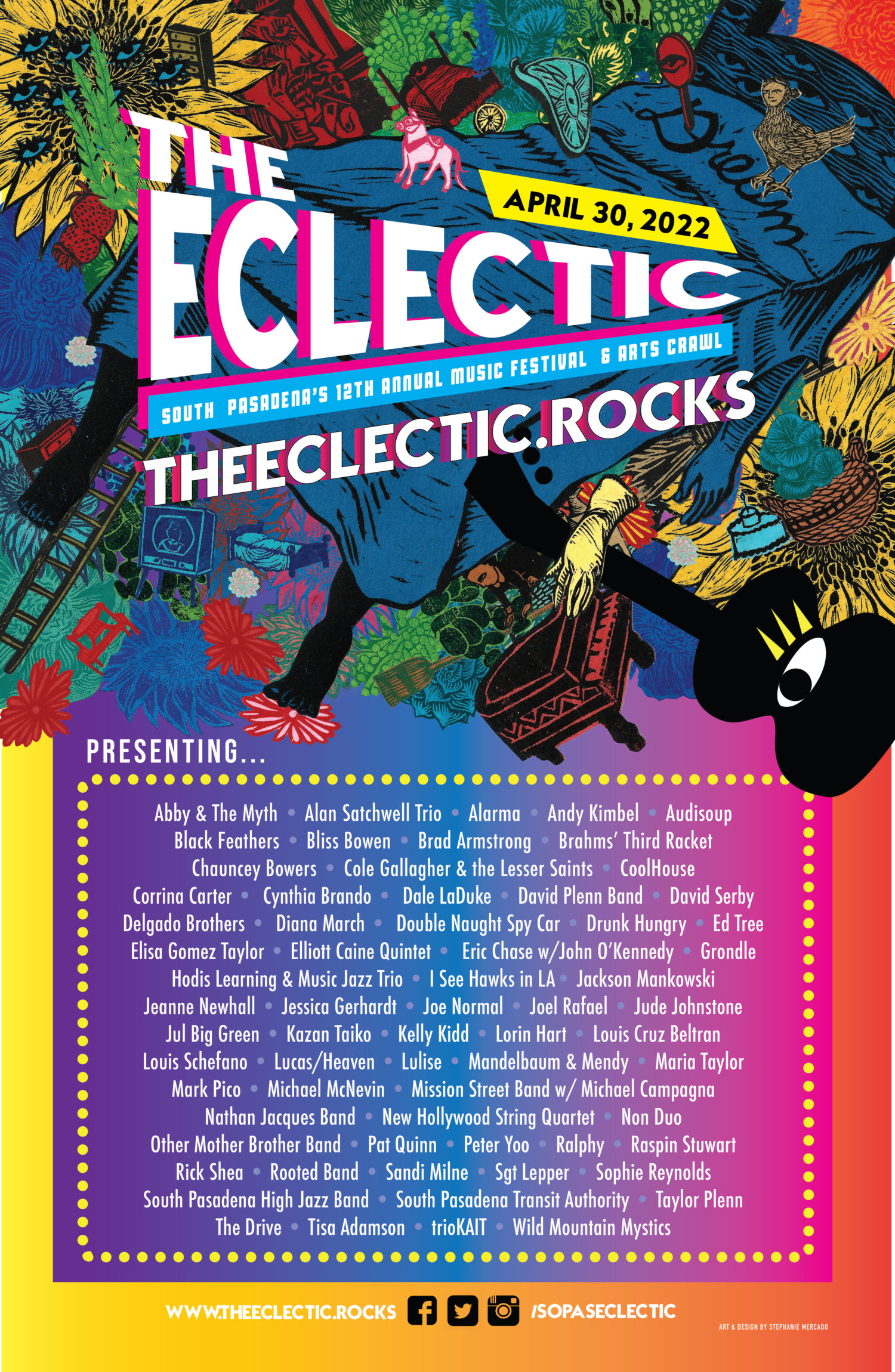