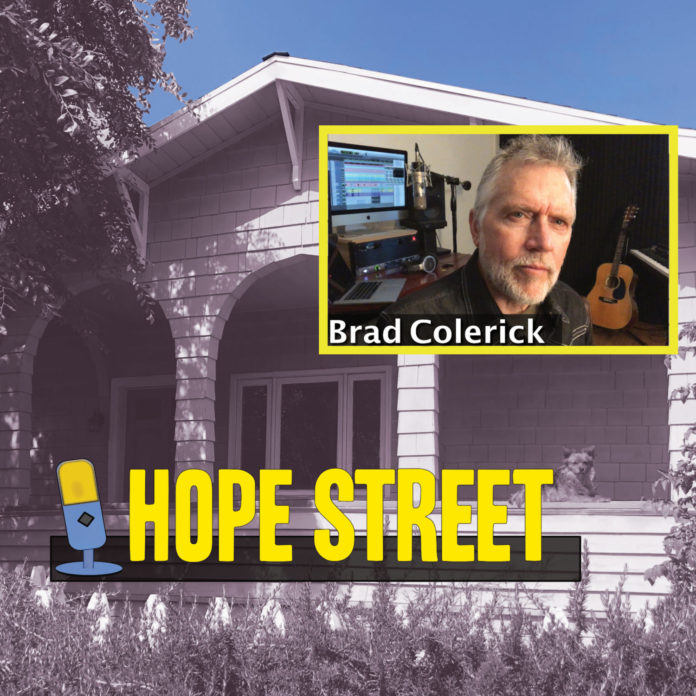 The title of Brad Colerick’s new album, produced during the pandemic, could not be more fitting: Hope Street. Yet it wasn’t his first choice. “I planned to call the album Manzanar,” he recalls, referencing the dramatic lead single. But friend and animator Scott Feldmann, who is creating an animated short film set to the song, sent a note recommending Hope Street. “I immediately loved the title — it seemed appropriate on many levels.” Colerick lives on Hope Street, where he records his Wine & Song podcast, which he intros with, “We’re coming to you from a quiet little street called Hope.”

Indeed. Over the past dozen years, Colerick has built a bona fide community of songwriters, acoustic musicians, and fans around his weekly Wine & Song live show at the Blue Guitar. As with the podcast, the 11 original songs on Hope Street are melodically and emotionally uplifting and frequently honor the bonds of family, friends, and community. The buoyant album closer “Life Is Beautiful,” for instance, commissioned by a longtime fan, celebrates true love, dogs, and “the smallest moments / and the stillness of the night.”

For all Hope Street conveys of the music’s origins and engaging spirit, the album’s heart seems to be “Manzanar.” Inspired by the 2020 LA Times obituary for Yuki Okinaga Hayakawa, Colerick was profoundly moved by her story and Clem Albers’ iconic 1942 photo of a 3-year-old Yuki sitting atop a suitcase at L.A.’s Union Station. Yuki and her mother, Mikiko, were forcibly moved to horse stalls at Santa Anita Race Track in Arcadia, California — just seven miles from Colerick’s present-day home — then to the Manzanar War Relocation Center in California’s Owens Valley.

Colerick had held the thought of writing about Manzanar for years, but not until the pandemic shutdown did a song finally emerge. “When I wrote it, we had been cooped up for some time. I could feel, in a small way, what that isolation from the world must have been like, although it really can’t compare with losing property, livelihoods, and being behind barbed wire and guard towers.”

He wrote the song at a remote cabin on the other side of the Sierra Nevadas from Manzanar and posted a rough video to YouTube from the cabin porch. Back home in South Pasadena, Colerick recorded the suspenseful acoustic backdrop punctuated by Isaku Kageyama’s taiko drums. He then reached out to Tokyo-based slide guitarist Chihana Onishi, who had performed at Colerick’s weekly showcase. From her Tokyo apartment, Chihana overdubbed her resonator guitar, which eloquently channels the confusion, dread, and resilience of Yuki and her mother.

“Sometimes, child, things are hard to explain People don’t always do what’s right Funny how fear can poison perceptions… We’ve got to be strong, and just hold on to each other And Yuki, someday you’ll go far”

The song also speaks to pandemic-era fears and social justice issues. Other tracks similarly resonate in both the past and present. Pensive country-rocker “Shattercane,” composed with guitarist Charlie White and named after an invasive corn-choking weed, didn’t make the cut for 2014’s Tucson album. Now, slightly rewritten, it can be taken as contemporary environmental commentary. “Fireline,” inspired by the catastrophic 2018 fire that virtually obliterated the Northern California town of Paradise, could easily describe half a dozen fires burning in that region in 2021 and the resultant need to “Keep an ear up to Heaven and an eye on the fireline” while reshuffling life’s priorities. The song features Cleveland-based rapper and vocalist Jul Big Green, whom Colerick met and collaborated with on music for a Del Taco commercial. Greasy, smile-inducing rocker “Time Machine,” inspired by the powder-blue 1971 Lincoln Continental Colerick’s grandfather owned and fired up by David Plenn’s rollicking guitar fills and solos, namechecks road-trip hotspots before wistfully hinting they’re places “you may never go again.” It’s followed by the poignant “Leona’s Love,” which imagines the biological grandmother Colerick discovered through a DNA search years after her death.

Then there’s the achingly melodic “Santa Ana Winds,” burnished with vivid imagery and Dave Ristrim’s pedal steel guitar. It’s a wrenching, blue-tinged farewell to longtime bandmate Tim Fleming, a beloved presence in L.A.’s acoustic music community who died in April, 2020.  Gospel-bluegrass gem “Road to Freedom,” recorded years earlier with Loafer’s Glory (guitarist Herb Pedersen; mandolinist Patrick Sauber; fiddler Tom Sauber; and late, great bassist Bill Bryson) was updated with new verse lyrics and assumes fresh depth now in the context of the past year’s social unrest. Dave Ristrim’s newly added Dobro and young up-and-comer Sam Robbins’ gentle harmony offer sonic healing while Colerick ponders redemption and humility: “Let me find in my soul who I am/ Is it my place to wonder why I stand in these shoes.” As with the reassuring “My Room,” ribboned with Phil Parlapiano’s accordion and written pre-pandemic, it’s a reminder of the mysterious ways in which songs can be insightful ahead of their time.

Many artists have struggled to find their footing during the pandemic, and Colerick has not been immune to those struggles. “I thought it would be really difficult completing an album without face-to-face interaction with musicians in the studio, but it opened up all kinds of possibilities.” With more diverse instrumentation and collaborators than he’s looked to before — something Colerick believed the songs and the times demanded — Hope Street represents an exciting broadening of horizons. “All of a sudden,” he acknowledges, “I felt limitless.”