Those looking for an added incentive to sign-up for the South Pasadena Tournament of Roses Golf Tournament on Saturday, July 31, can look no further than a big dangling carrot.

How does 10 grand sound?

The high stakes award will be up for grabs as golfers take part in the 18-hole best ball tournament at Arroyo Seco Golf Course. Funds raised support construction of the town’s entry that will roll down Colorado Boulevard in Pasadena on New Year’s Day.

The South Pasadena Tournament of Roses Committee (SPTOR) traditionally hosts the summer event and, with last year’s cancellation due to COVID-19, looks forward to its return as dozens of players, including many familiar faces, are scheduled to take part in the 8 a.m. shotgun start.

Sponsoring a $10,000 hole-in-one on the course’s 129-yard 17th hole will be Mamma’s Brick Oven Pizza & Pasta as owners Steve and Jamie Khuu Inzunza are all in hoping someone will sink a hole-in-one and walk away with the big prize.

“Traditions many times are the fabric that keep a community together,” explained Steve Inzunza, “and I think the Granddaddy of Them All is the Tournament of Roses. And with South Pasadena having the oldest self-built float [constructed entirely by volunteers] it just reflects our community.”

And further, as a community that comes together when an assist is needed, Inzunza added, “It’s a natural” for the local pizza establishment, a top gathering spot for families and groups, to put its stamp of approval on this one and lend a hand. “We really enjoy being apart of the tournament and supporting it.”

The SPTOR is asking $90 per person or $300 for a foursome to play the 18-hole, 3-par course. A raffle, online auction, lunch and awards are included in the tournament fees.

“We’re rooting for someone to get that hole-in-one,” said Inzunza, knowing someone could walk off with a lots of dough, as in a large check, not the kind he’s used to seeing around his pizzeria. “We would be thrilled if somebody won. We wanted to support it because we like the history of the event.”

Tournament proceeds will help pay for steel, flowers and other associated costs in constructing a float in a parking lot behind the War Memorial Building on busy Fair Oaks Avenue in town. Work has begun on “Sky’s the Limit,” the city’s entry which incorporates a touch of South Pasadena’s past when the Cawston Ostrich Farm was a premier tourist attraction after it opened in 1886. A rocket-powered ostrich, flying through the air, is the top attraction on board the float.

“What I like about it is you get people from all walks of life working on it, with volunteers coming up with the design and working on it throughout the year,” said Inzunza. “It gives you a little chill knowing people were working on the city float 100 years ago and it continues today. You’ve got so much history, going back generation after generation in being apart of it. It’s so reflective of South Pas and who we are as a community. I love it.” 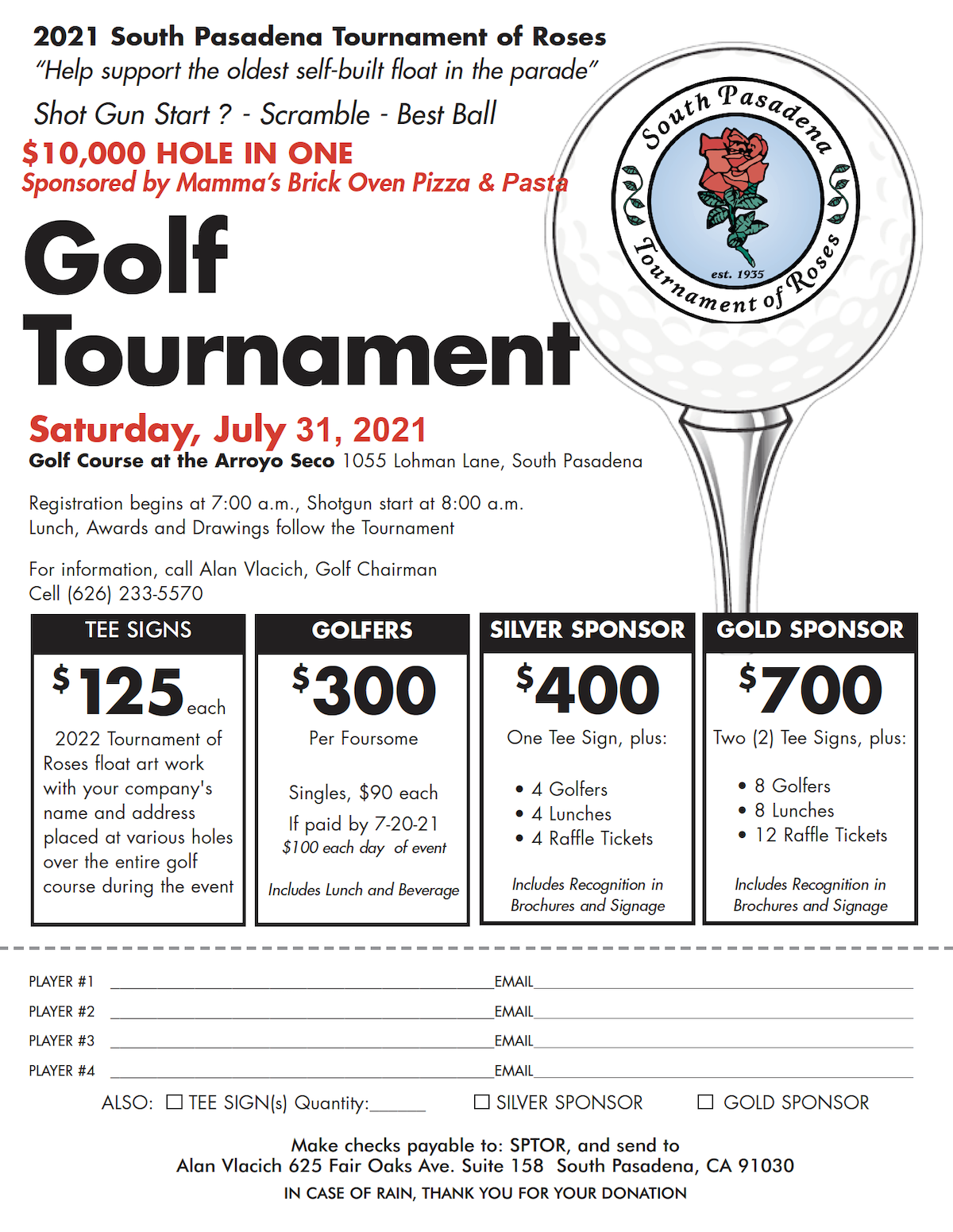