Enjoying a day of golf, the opportunity to walk away with a raffle or online auction item, lunch, awards and helping a community cause are reasons enough to take part in the South Pasadena Tournament of Roses (SPTOR) Golf Tournament.

After a year off on account of the pandemic, the event is set for an 8:00 a.m. shotgun start on Saturday, July 31, at Arroyo Seco Golf Course in South Pasadena.

Proceeds go mainly to paying for steel and flowers for South Pasadena’s float, constructed entirely by volunteers, that will roll down Colorado Boulevard in the 2022 Pasadena Rose Parade on New Year’s Day. A construction crew has begun work on the city’s entry – “Sky’s the Limit” – that will roll down the 5 ½-mile-route. It incorporates a touch of South Pasadena’s early history when the Cawston Ostrich Farm was a premier tourist attraction in town after it opened in 1886. A rocket-powered ostrich, flying through the air, is the top attraction on board.

The committee responsible for constructing the city’s entry is staging the tourney, asking $90 per person or $300 for a foursome to play the 18-hole, 3-par course.

Organizing this year’s tournament are co-chairs John Vandercook and Alan Vlacich, a pair of SPTOR board members putting in long hours to ensure the success of the event.

“People can support the South Pasadena tournament of Roses by playing in the golf tournament, by getting a tee sign and become a sponsor, by donating gifts to the raffle, and new this year we will be having a online auction starting a few days before the tournament and ending a day later,” explained Vlacich.

All abilities are welcome in what he calls “a really low-key golf tournament that is a lot of fun for golfers. I think this tournament will be very successful because things are opening up again and people are looking forward to being with their friends and neighbors.”

The online auction is open to the public, to those who “cannot play in the golf tournament but still want to support the float,” said Vlacich.

The golf tournament, which raised roughly $8,000 a couple of years ago before COVID shut it down, has been going on for so long that Vandercook explained kids who once played in it with their dads are now showing up to take part as adults with their own children.

“It’s just a fun family event and it helps a longtime organization in town – The Tournament of Roses,” he said. “People are wonderful in wanting to support our float.”

Gold sponsors at $700 are being sought. At that level, supporters receive green fees for eight persons, eight lunches, and 12 raffle tickets. The sponsorship also includes recognition in brochures and signage.

Individual Tee signs can be purchased for $125 each. 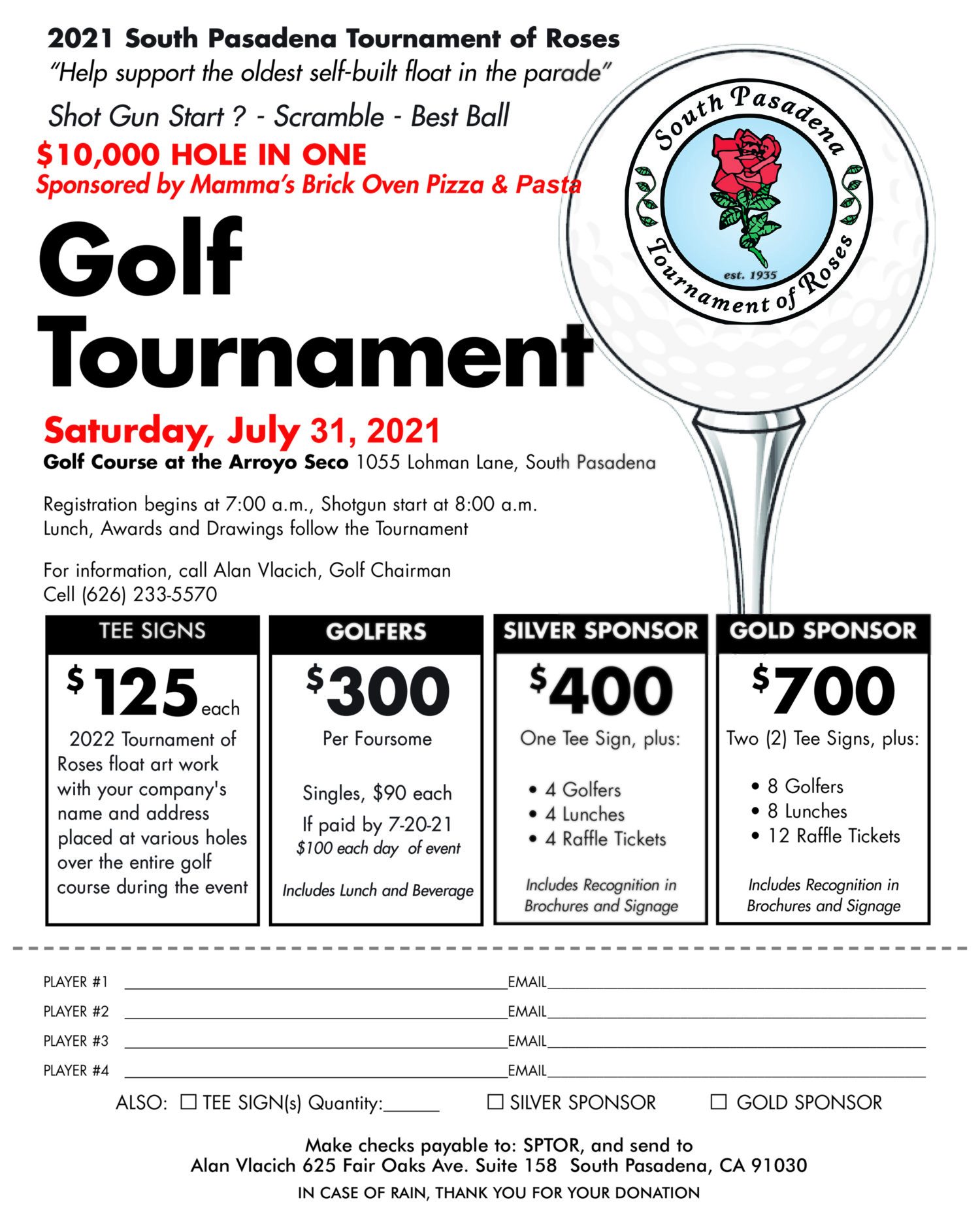