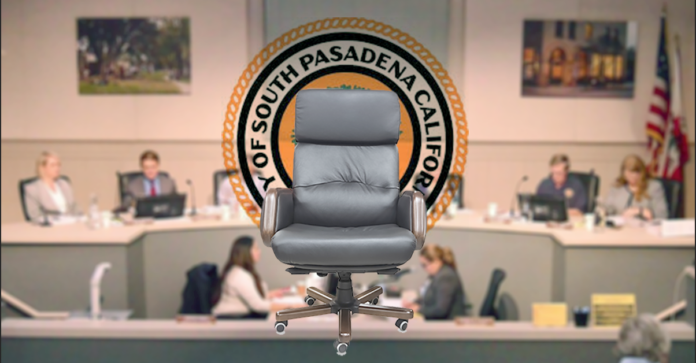 South Pasadena is taking applications for candidates interested in an appointment to serve out the remaining term of Dr. Marina Khubesrian, the Second District Councilmember who resigned Aug. 18 after admitting to using fake identities to send menacing emails to colleagues and citizens who criticized her allies or interests.

The decision came after a robust debate during which the Council considered a proposal to have its staff return with a procedure for the appointment followed by the receipt of applications with an eye to having the Council select someone at its Oct. 16 meeting.

But there are only about 12 weeks remaining of the four-year term that ends Dec. 2, when the seat will be filled based on the outcome of the Nov. 3 election. Only one person, John “Jack” Donovan, completed the paperwork to run for the seat. The city received public comment suggesting Donovan should therefore simply be appointed to complete the term, but Mayor Robert Joe said Donovan has already said he would not accept such an appointment.

The Council also had the option of leaving the seat empty for the remainder of the term but did not seriously consider doing so.

Councilmember Mike Cacciotti noted the Council may face critical choices in the weeks before the election on traffic, open space, budget, and other issues. He said District 2 citizens should not be left without representation on those matters.

Mahmud pushed for more time, saying the appointment is an important one because whoever is selected will not face reelection and so will have no political accountability.

Councilmember Schneider said they should move quickly, in part because the five-member Council needs another vote to avoid split votes during the interim.

Cacciotti moved to notify District 2 citizens of the vacancy and to submit applications so that the Council may select someone at its Sept. 2 meeting. The motion passed 3-1 with Mahmud dissenting.

All candidates would be interviewed in public session.

The city also formally received and filed Khubesrian’s resignation. The vote was taken without ceremony. Historically, letters of resignation are acknowledged “with regret” and/or testimonial, but none was forthcoming.

Only Mahmud, who said she’d worked closely with Khubesrian, sought to break the silence of her colleagues. “I am very sad. I certainly don’t condone what she’s done. She’s taken responsibility. It was wrong for her to do what she did, but I think we would be remiss in not recognizing that although she made some serious mistakes, she also did a lot of good for the city. It would be unfair to simply allow her resignation not to be accepted without noting the good that she did.”

Work on the City Council is a “labor of love,” Mahmud concluded. “It is a shame that it unwound for her. I personally only wish that she recovers from whatever ailment that is affecting her.”

I was recently accused of creating two email accounts and sending emails from those accounts using fictitious names. I originally declined comment on the grounds that the accusations should not be adjudicated in the press and I did not want to influence, or create the appearance of influencing, the investigation. Thus, it is not the media’s or community’s fault that they did not know what to infer by me declining to comment. But, clearly, I cannot continue to stay silent and wait until the investigation is concluded even while I am cooperating fully.

I want to share important information that will give transparency to this disturbing matter: I alone was responsible for sending the emails from two email accounts using fictitious names in May and June this year. While this happened during a time of great personal stress and when I was facing a serious health issue, there is absolutely no excuse for my conduct. I also had some serious reactions to a medication I was taking and had a lot of increased anxiety that was exacerbated during the Covid-19 pandemic. Frankly, I am extremely remorseful, embarrassed and mortified by my actions.

Therefore, I want to convey a deep and sincere apology to all in the City of South Pasadena, especially to those who received or reviewed the emails. I will reach out and individually apologize to the individuals who received emails or were mentioned in the emails especially since the hardest regret I live with is the knowledge that what I’ve done caused or could have caused someone any harm, worry, concern or emotional upset.

I further apologize to the people who I work with and have worked with in the City and City Council whose professional and personal lives may have been impacted by this – none of whom were aware that I had sent these emails. Another deep regret I have is that some members of the community, who know and trust me, defended my reputation without knowing all the facts. I further apologize to all who have supported me in the past and present as well as my neighbors, friends, acquaintances and family.

While I believe this conduct was quite out of character for me, I bear ultimate responsibility for ensuring that my personal life comports with the standards expected from a member of the City Council. I’ve reflected on my wrongful and impulsive acts and take responsibility for what I’ve done. Obviously, this influenced my decision to not run for an additional 4-year term on the City Council as I realized I’d been burning the candle at both ends, was overly stressed, had trouble sleeping, and was taking political disputes far too personally. I was also taken aback by harsh criticism of and attacks on hard- working City employees who I thought were doing a good job. I’ve been successfully addressing the stressors and personal health issues that came to a head in May and June.

As background, one of the stressors that led to my irrational and wrong actions was that since 2018 I’d been receiving a series of anonymous emails which were threatening in tone and very critical of City employees without providing real facts. I reported these emails to the City at the time. I’ve attached some examples so that others understand what I meant at the last City Council meeting when I addressed cyber bullying and my family’s concerns about my safety and mental health.

I’ve been a dedicated physician as well as a committed public servant who has gratefully volunteered and served the City of South Pasadena since 2011. As part of my acceptance of responsibility and apology, I will resign my office for the remainder of the term effective at 8:00 a.m. on August 18, 2020. I have provided this date so the City and the City Council have at least a full business day to consider the steps needed to replace me and any other steps needed for my resignation. I will not be voting on any matters nor doing any work on behalf of the City from now until my resignation is effective.  I am confident that the Mayor and City Council members will be focused on the important work before the City in the next four months.

I am proud of the work I’ve done for South Pasadena since 2011 and I remain grateful for the support I have received from those who continue to respect me and value my public service.