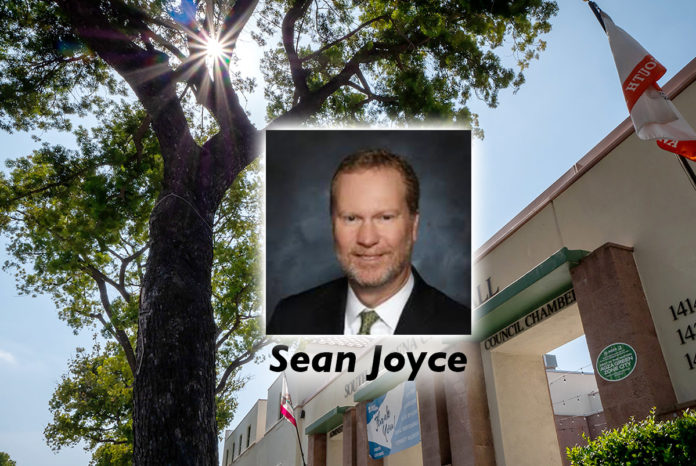 During a short mid-day special meeting Sept. 23, the South Pasadena City Council unanimously voted to appoint Sean Joyce, its former long-time city manager, to serve as Interim City Manager starting Sept. 24. Joyce will serve until the naming of a permanent city manager to replace Stephanie DeWolfe, from whom the City Council voted unanimously Sept. 11 to separate.

The decision, which must be approved by the state retirement system as Joyce is a retired government employee, will be ratified at the Council’s regular meeting Oct. 7. He will be paid $16,656.25 per month and receive no other benefits.

The city said its need for an interim city manager is critical. Besides managing through covid-19, police reform, k-rails and other issues, the town is still trying to complete its long overdue 2018 audit; is three months into a new fiscal year without a budget; and is still working to clean up its finance department after years of “inappropriate accounting procedures” even as its finance director has departed on an indefinite family leave.

The Council and its Finance Commission are poised to act on recently appointed Councilmember Stephen Rossi’s plan to form an ad hoc finance committee to aide in the streamlining of the city’s finances.

Joyce, 57, told the South Pasadenan News he is “truly excited about returning to South Pasadena. I held the job for eight years and loved it and the community.” The city is “a great organization going through turmoil right now and I want to be a part of working with and for the City Council to restore the confidence of the community and to find organizational stability in the immediate future.”

Pending direction from the Council, he said his top priority will be understanding and addressing the city’s outstanding financial situation. He intends “to work with city staff, the auditor, finance commission and ad hoc commission—if there is one—to address any and all financial issues while fostering the successful arrival of a full-time, regular city manager.”

Joyce has been getting up-to-speed on and is intrigued by the city’s recent budget management issues. Now, “I have more questions than answers, such as what is the current cash position of the city and are all funds accounted for.”

Last August, Joyce joined Alliance Resource Consulting, a public sector executive recruiting firm. He will not be involved with ARC during his service to the city and said ARC won’t be allowed to bid on any contract the city lets to recruit a permanent city manager.

Also during its meeting Wednesday, the city authorized Acting City Manager Paul Riddle to initiate a recruitment process for a new city manager but to delay the decision on how to go about doing so until Joyce weighs in with his advice on the matter.

Prior to joining ARC, Joyce ran his own consulting business for two years. He was city manager in Irvine for 14 years and in Sierra Madre for six years. He holds a BA in political science and a Master of Public Administration, both from California State University, Fullerton.

During his tenure in South Pasadena, Joyce hired Josh Betta to be the city’s Finance Director. An unsolicited June 5, 2020 report by the now retired Betta critiquing the city’s finance practices triggered a chain of events that help lead to the departure of DeWolfe.

Joyce declined to comment on the Betta report because “it is his perspective. I have great respect for Josh but until I get into the auditor’s report and gather all the information available to me, it is not responsible for me to draw conclusions.”