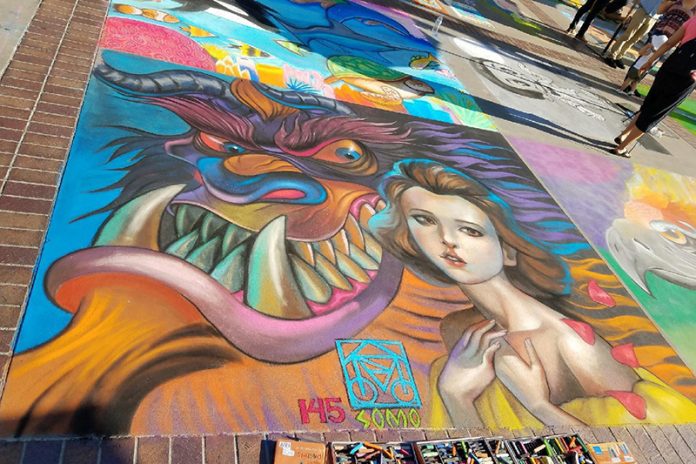 UPDATE: Artist awards were announced today. Best in Festival was awarded to Shaina Joel, who created a touching tribute to the late Batman actor Adam West. Shuji Nishimura took home second place with a recreation of the cover for “The Very Best of Kiss” album. Third place was given to Arlou Somo and his colorful rendition of The Beauty and The Beast.

As nearly 600 chalk artists toiled away meticulously on the cement ground at the Paseo Colorado, hundreds of vivid illustrations filled the sprawling shopping center. The 25th annual Pasadena Chalk Festival would not be stopped by the blistering summer sun. The Father’s Day weekend festival is routinely one of the world’s largest art festivals, and was even named so by Guinness World Records in 2010. It draws hundreds of chalk artists, or madonnari, to showcase their talent for tens of thousands of guests.

Droves of visitors roamed the mall watching the artists at work. In addition to the main chalkway in the center of the Paseo, the festival featured different areas where themed murals were put on display, such as the Chalk of Fame, an area conveniently located in front of the ArcLight Pasadena where artists illustrated scenes, characters or posters from their favorite movies.

Artist Francois Lariviere sees the festival as an opportunity to showcase his talent on a large canvas. “I have a spare room I use as a studio so I can’t work as large as I’d like to so this is a nice opportunity for me to get out and really go big,” Lariviere said. “I look at chalk drawing festivals as if they’re exercises for me. It’s a really great way to get out and interact with people and kind of talk with the work and work large.”

Lariviere has only been chalk drawing for about two years, but his talent was evident by his picturesque piece of a Cheyenne male, a photo by photographer Edward Curtis that he chose to replicate with chalk.

“This is my second year at this festival. Pasadena is a really, really amazing little city here. The support of the community to come out when I first came to this festival. I was blown away by how many people came out and how many artists there were. To me, this was the one to get into,” Lariviere said. “I’m just honored to be a part of this event. I have a lot of fun.”

The festival was complemented by live music from Relish and Roger Espinoza on Saturday and will present Midnight Ride and Frater on Sunday. It also boasted an art gallery where guests could bid on paintings and merchandise, with proceeds benefiting the Light Bringer Project, a Pasadena non-profit organization which aims to provide underprivileged youth in with “arts and education programs” in the greater Pasadena and Los Angeles area.

The Artist Award Ceremony will close the festival out tomorrow night and reveal honors for the participating artists. The madonnari are eligible for awards such as Best-of-Show, Best Technique, and Most Humorous.

The second day of the festival will also feature the Pasadena Police Classic Car Show, where classic cars will be on display for patrons to view.