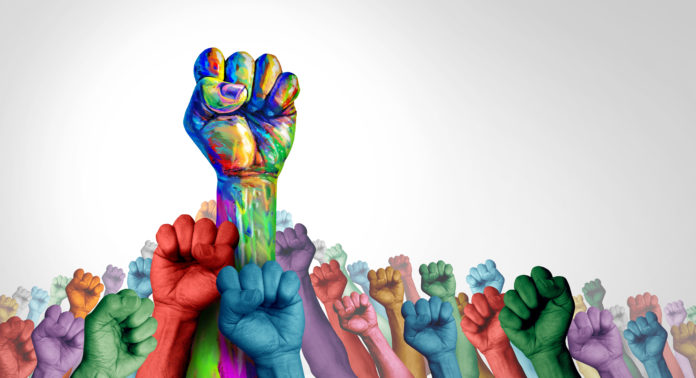 Be honest. How are you spending this Thanksgiving? There are probably fewer people at your table this year. Social gatherings – limited to close friends and family – still may invite the killer virus into your home. So, we call, text, and Zoom instead.

The holiday season is a time for reflection. My topic of reflection this year is America. Who we are, and what we’ve become. For instance, families gather on Thanksgiving, give thanks, and then sit down to a feast, while others are served meals at the Rescue Mission downtown. Many of you help serve holiday meals to the needy. Your generosity is appreciated – for one day.

What about the other 364 days?

Working against transformation in politics and society is our human nature. We resist change. We vote for familiar politicians. We enclave — prefering to be around others we feel comfortable with. A quick story first to explain what I mean.

My friend Mike and I recently joined a tour of Skid Row in downtown Los Angeles. Our guide was a longtime resident of the L.A. homeless community which populates more and more city sidewalks and freeway underpasses every day. She currently resides in Skid Row assisted housing. As we walked through the heart of Skid Row, she described her relationship with city officials. Her ability to articulate the homeless experience makes her highly sought-after as a speaker for the plight of the L.A. homeless. She is invited to share her life experiences on the streets at public forums, talks, and planning meetings.

However, our guide expressed her feelings of being used, paraded around at city functions by the urban elitists. Everyone hearing what she had to say but not really listening. She said her value as a fellow Angelino and as a person was limited by her socioeconomic status. Her “celebrity” in the fight to end homelessness ends the instant the top-paid city officials leave for home, driving a Lexus or Range Rover, and arriving at their high-security homes. She recounted that once, she visited the home of a public official to drop off some paperwork and was immediately surrounded by armed security guards, followed by L.A. City police officers. One party controls the city government. They claim to do everything possible to improve conditions for the homeless, usually by increasing taxes to solve the “homeless problem” as proof of their desire, then act dismayed when nothing changes. Her words.

Within a 20 minute drive of my home, over 66,436 homeless Americans are living on the streets. According to the 2020 Greater Los Angeles Homeless Count, the “City of Angels” homeless count is 41,290.

Yes, I am a conservative. But I can see how that label has stereotyped me, as it has liberals, and independents. We are all Americans. But even my own “liberal” daughters don’t believe that anymore. My youngest said she does not believe America is the best country in the world. I know we are flawed, but to say our nation is not the best of all the rest? She doesn’t know what she’s talking about.

We Americans do nothing but fight against each other hoping for an advantage others don’t have, or hoping to defeat the advantage others have. Our cage of freedom defines and confines us, referring to ourselves as conservative or liberal, republican or democrat. We speak about our politics using black and white terms, mostly because it requires so much effort to explain to others that deep down, we prefer to live in the grey. The truth is we are individualistic, multifaceted, and diverse people. But it’s so much easier to see the world as us and them.

Well, I’m ready to change my thinking. Will you consider doing the same? Who knows, maybe we can start a bloodless takeover of government and make it our country again. Not we the democrats, or, we the republicans. We the people. The urban and rural, standing together as one United States of America.

The American Dream (Hierarchy of Accessibility)

At the heart of any political party claiming to represent our nation, the citizens must be able to ascend our country’s socioeconomic ladder to achieve something resembling the American Dream. Otherwise, it remains a “dream” – a wistful ideal or fantasy only accessible at the movie theater. But even in the movies, the battle for America continues.

It’s time a major party makes good on the promise of the American Dream – accessible not just to those who are entitled at birth or those fortunate enough to overcome a myriad of obstacles to achieve the slightest upward mobility, only to slide backwards again like a game of “Chutes and Ladders.”

First, remember that any new party that draws voters from the existing major parties will not be 100% representative of all its members. Instead, the new party’s populist belief that a compromise is possible, will actually draw strength in the process of blending and resolving many of the most divisive issues facing Americans today. Only then will it defeat the Republicans and Democrats, governing like no other time in human history.

The following is an example of what the Urban-Rural Alliance Party will look like:

Finally, the new party will require conservative and liberal members to join together for compromise on past “hot button” grievances that cause single-issue party loyalty. Three examples come to mind: federally-funded safe abortions (pro-choice), background checks and increased management of firearm ownerships while maintaining the “right to bear arms,” and secure national borders (legal immigration).

With your vote, our party will occupy elected offices in state and national government. Our party will help open doors for you and your family and our community. Together, we, the Urban-Rural Alliance Party, are unstoppable. Without us, you are still capable, independent, and strong. To my point, you are entitled to exercise your right to take us down. Dissolve our party and pursue another system of governance if we fail to deliver.

If only we had a unifying party such as this.